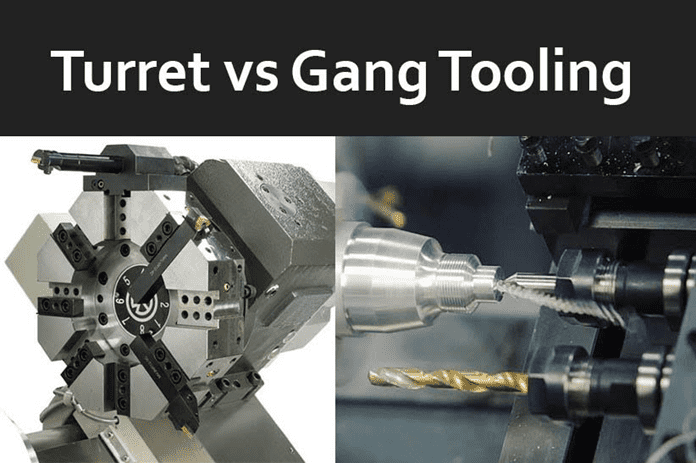 This is one of the many topics that seems to engender religious fervor from one side versus the other.  I personally went through several hundred online articles and correspondences I’ve had with our G-Wizard customers about this choice.

BTW, here’s a video on the topic that hits the highlights quickly:

Let’s start with some definitions and the basic conclusion I reached after all these conversations and research, and then dive into the myriad details.

What Turret Lathes and Gang Tooling? 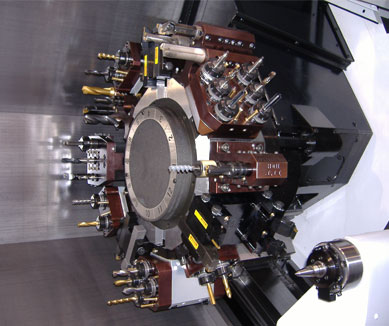 For production lathes, tooling is generally either mounted on a gang plate or on a turret.  Ironically, the picture to above shows both formats in use:  each turret tool station has a gang plate mounted which multiplies the number of tools available from each turret position.

Pure gang tooling is the simplest option.  In this mode, the tools are mounted in a row on the lathe’s cross slide.  Accessing a tool is a matter of pulling back from the workpiece along the spindle’s axis to keep the tools from hitting the workpiece, sliding the X axis until the correct tool is in position, and then moving along the Z-axis back to start cutting.

A gang slide typically looks like this with the tools mounted:

The video captures the simple motion of the gang tool change as well as the speed of a tool change well.  Notice the two tooling formats–the rough turning tool is taking a big deep cut and is a typical square shank lathe tool holder.  The rest of the tooling uses a round shank with a flat that is more typical of gang tooling.  It’s more compact and sometimes you’ll even see a single holder mounting two inserts to be used for different tasks.

Now here is a turret lathe in action:

That machine in the video actually has 2 turrets and uses one to hold a neat live center “tail stock” to turn that long thin part.  You get the idea of a turret lathe from it though.  Turret Lathes are very similar to the rotary toolchangers familiar to CNC Mill users.

Which One is Better?

There’s a long list of pros and cons for each that we’ll get to shortly, but as promised, let’s start with the top level conclusion:

The choice of gang tooling versus turrets on a CNC lathe has more to do with what kind of parts you’ll be making than anything else.  Gang Tooling is very hard to beat for smaller diameter short parts that don’t require a tailstock.  Turret Lathes are hard to beat for versatility and of course are a must have when you need a tailstock for your part.

In going through the many articles I researched on the topic, I frequently came across machinists who wished they could use their gang lathes for everything, but had turret lathes for parts that were too long and thin to be made with a gang lathe.

In some ways, that almost means that the “competition” between Gang and Turret Lathes is a bit misleading.  Perhaps a better “competition” would be gang lathes versus Swiss machines.  The Swiss Machines use a guide bushing and turn from the end towards the headstock so that the work is always well supported with very little overhang to deflect: 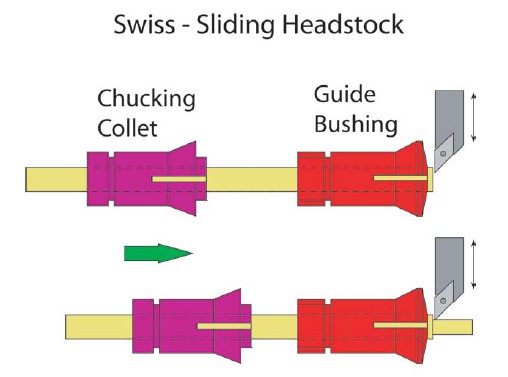 In exchange for more cost, complexity, and the requirement of barstock that is more expensive because it has to be compatible with the Swiss bushing setup, a Swiss machine can turn parts that would be too long and spindly to do with a Gang Lathe.

Let’s start with the Gang Tool Gang’s view on why their machines are better:

Remember, some parts just can’t be made on a gang lathe because you can’t use a tailstock–the gang tooling would run into the workpiece if it can’t get completely away from the workpiece, which it can’t because the tailstock is in the way.  There are some gang lathes that have retractable tailstocks, but retracting a tailstock each time a tool change is needed defeats the main advantage of a gang lathe–super fast tool changes.

The gang tool change is super fast because it uses slide motion to do toolchanges and requires no turret indexing.  If you think about it, the typical turret lathe has to move to its tool change position before it can start to spin the right tool into place.  Once the tool is in place, it can then move back to cutting position.  This is almost exactly the same amount of motion needed for the worst-case gang tool change, but the gang tool has no indexing to do.  It moves to the tool change position (different for each gang tool) and moves the next tool into place, then moves straight back.  The most commonly used tools are placed in the center of the gang plate and they only move a small fraction of the distance to the furthest toolchange position the turret lathe needs.

Turrets are expensive precision devices with lots of moving parts.  Gang tooling is minimalist.  It involves a few blocks mounted on the cross-slide and that’s it.  The lathe’s normal axis servos and leadscrews do all the work for a toolchange.  This means gang lathes can often be a lot cheaper than turret lathes.  In some cases, shops buy 2 gang lathes for what a single fancy dual spindle turret lathe would’ve cost and feel they’re coming out way ahead.

If your part needs live tooling, perhaps to machine wrench flats onto a part or to drill a bolt circle on a flange, it is much cheaper to do with gang tooling.  Pneumatic spindles, cable driven spindles, and smaller electrical spindles can all be pressed into service if the lathe has an indexable C-Axis spindle.  Motorizing a turret drives up the cost in many ways because of the difficulties of transmitting rotary power out to the tool positions on a rotary turret.  It also drives up the size of the turret lathe, making live turret tooling impractical on smaller lathes.

This is one that swings back and forth, but if you look at the ability to swap out an entire block of tools easily with gang tooling, it’s hard to see how setup can’t be done more quickly since it can be done offline or saved as an assembled block of tools for various jobs.  Here is a block with 7 tools installed: 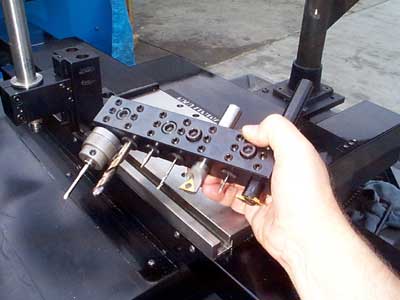 Alternately, a lot of gang work can be done with a basic set of tools and just changing one block that holds a twist drill of a particular size, for example.

Simplicity and a reduction in moving parts eliminates tolerance stack up and various kinds of slop (backlash) in the moving parts of a turret.  The accuracy issue is all about achieving the correct centerline (Y-axis) position with the tool.  Once shimmed into place, or a custom bushing drilled for a twist drill, it’s hard to get more accurate and most turrets will be less accurate.

Another factor that gives the gang lathe an accuracy advantage is they’re used to moving shorter distances while machining a part.

This one is closely related to simplicity.  There’s not a lot to go wrong on a gang lathe.  Certainly a turret has all the wear points and parts to break of a gang lathe plus a whole lot more.  If you crash a turret, you may have an expensive repair bill, or you may simply need to realign it.

Let’s turn to turrets before we start thinking gang lathes are the only way to go.  The #1 advantage of a Turret is flexibility.  You can use a tailstock with one, which allows much longer and skinnier parts than could be made on a gang lathe, though there are some tricks like box cutters that can help the gang lathe do more.

In addition to length, turrets allow larger diameter parts.  If you think about it, a gang tool setup needs clearance for the part to fit between any two tools.  This limits the diameter or the number of tools you can put on the gang plate.  The Turret lets you have your cake and eat it too because it leaves room for much larger diameter parts.

While experienced gang lathe users find programming easy, beginners generally will find turret programming to be easier.  With the gang lathe you have to worry about clearing the part for a tool change.  This can be tricky with different setups and part diameters.  Make a wrong move and a tool crashes into the part.

Refer to the top right picture in the article where every station on the turret has multiple gang tools installed.  That situation has been taken to the extreme and will be fairly complex to program, but having two turrets, or even just putting gang holders in a few turret stations still means more tools for the turret lathe.  Here is a 3 tool gang plate intended to go in place of 3/4″ or 1″ square shank tool holders: 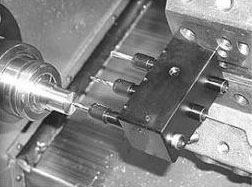 Foxwood Machine, the company that offers this product, says they created it for machines that didn’t hold enough tools or that couldn’t change tools fast enough.  I can see where putting the tools needed to drill and tap a particular hole and thread size onto one block like this might make setup simpler too.

This one is related to the Flexibility advantage of Turrets, but they seem well suited to more complex machines that are set up with dual spindles, multiple axes, and other features to accommodate parts that would otherwise require multiple setups.

Turrets can achieve better hogging just by virtue of being more common on larger lathes.  But, a dual turret machine can also perform the trick of using two cutting tools at the same time as portrayed in the turret video above.  Suppose you’ve got a tool that’ll take a 1/8″ cut.  Put one on either side of the workpiece using two turrets and have one lead the other slightly.  Now you’re taking off 1/4″ with each pass and the two tools are counterbalancing each other’s tendency to deflect the part.

This is a pretty neat trick that can really reduce cycle times.

Turret Lathes can Gang Too! A small gang plate in a turret station…

Imagine if each position in your lathe turret was a small gang plate with multiple tools.  Are you starting to see the possibilities?

While there is a natural human tendency to want to set up a competition that leads to a single winner, in this case it’s “Horses for courses.”  The choice of gang tooling versus turret lathes is best made through a careful analysis of the types of parts to be made and which set of advantages those particular parts will benefit from.

If you don’t know what kinds of parts you will ultimately make and aren’t willing to accept the limitations of gang tooling to smaller diameter shorter parts, you’ll probably prefer a Turret.  If you want the simplest possible programming and a smaller learning curve, you’ll probably want the turret lathe.  On the other hand, if you want the shortest possible cycle times so you can crank as many of the kinds of parts made on gang lathes out as cheaply as possible, look at gang tooling.