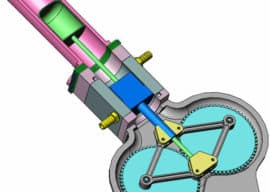 This page is largely links and pictures of model Stirling engines I’ve collected. Stirlings are fascinating “external” combustion engines that can be powered from a variety of heat sources. The “Low Temperature Differential” (LTD) Stirlings will run from the heat of the palm of your hand if they’re made well enough, and by sitting atop a steaming mug of coffee if they’re less efficient. Fascinating devices, no?

To build one that makes any power requires a fair amount of precision. I rate Stirlings as harder than steam engines, but MUCH easier than model turbines!

Here is a Rhombic driven Stirling: 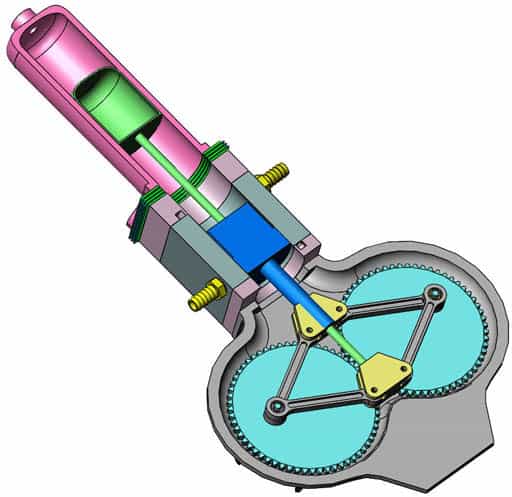 I’m also interested in larger Stirling designs for the production of electricity from solar power. See my page on that for more.

This was a kit that required no machine work, but it was fun anyway. It runs on a cup of coffee: 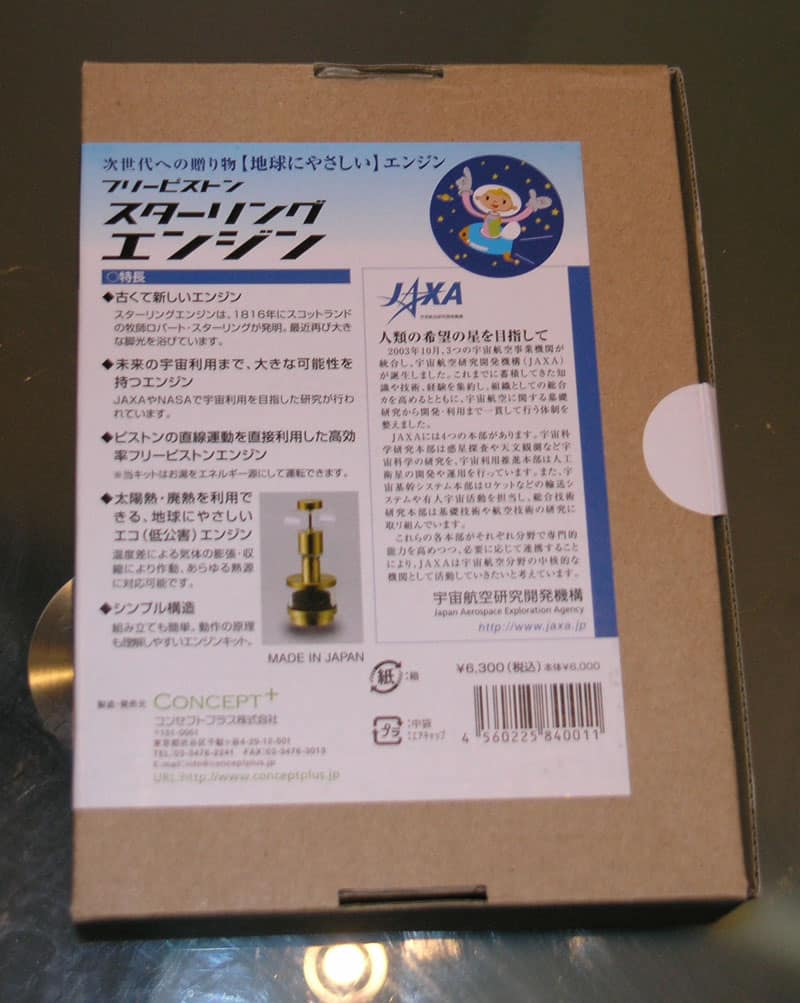 The box came straight from Japan via eBay… 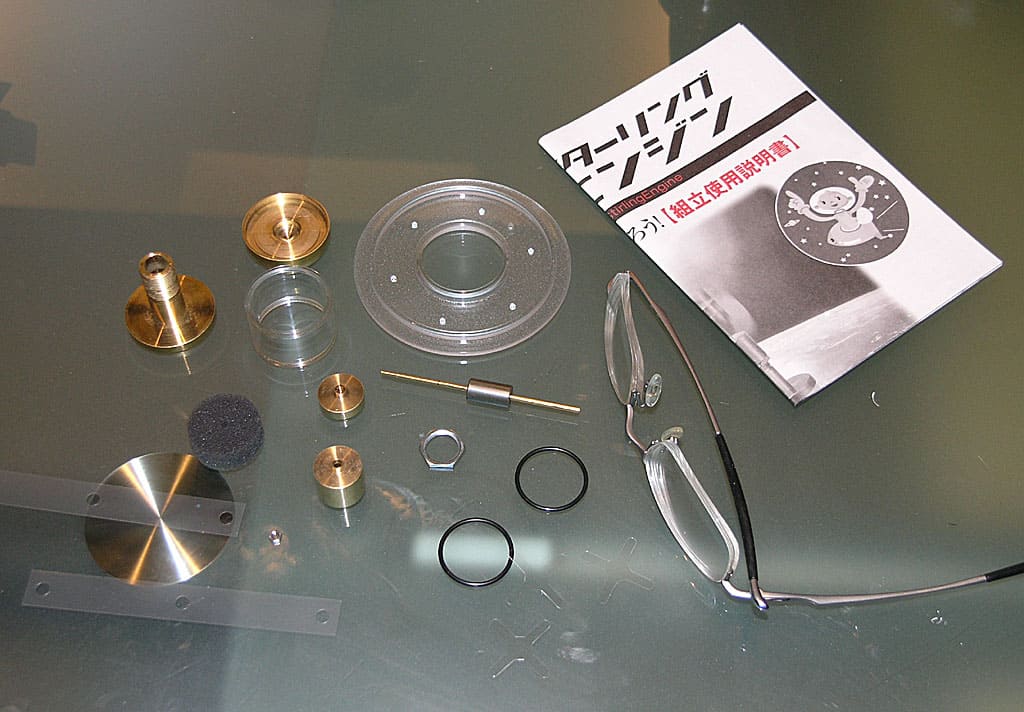 Pretty simple set of parts. The celluloid plastic are “springs”… 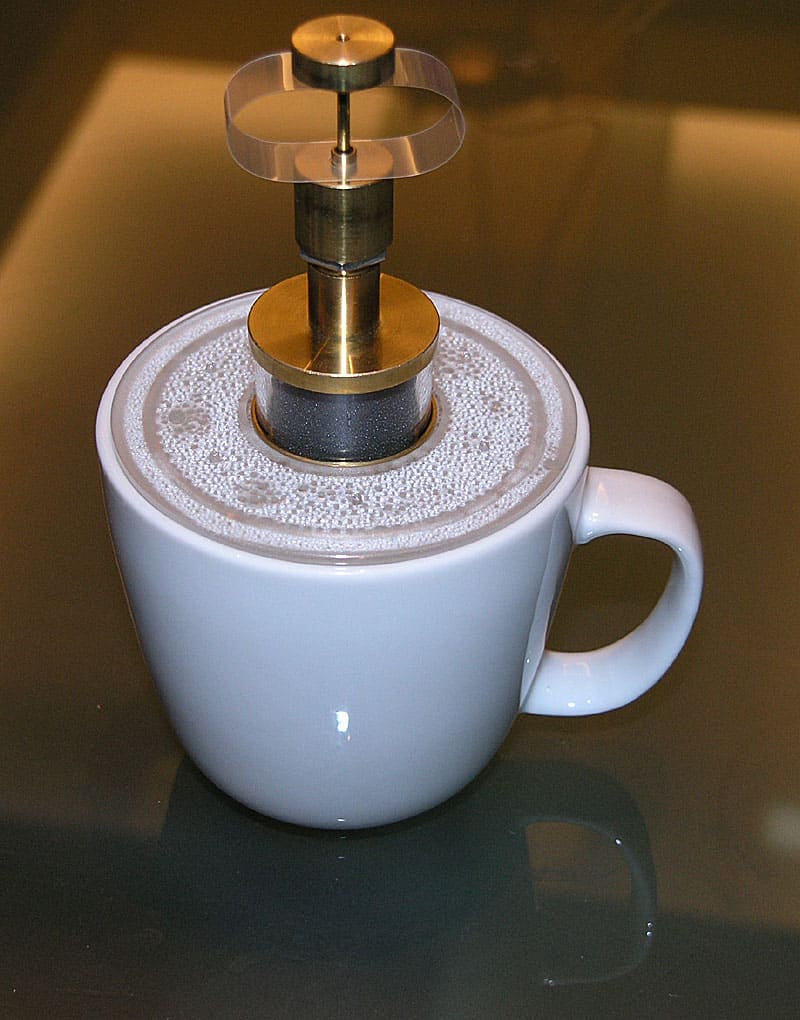 It was running, but the camera stopped it. Click for a QuickTime movie…

If you want one, search for Free Piston Stirling on this eBay Store

Great Primer on How the Stirling Works

Nice spreadsheet walkthrough on how to design a Stirling engine

Quirky Engines: Theory, various projects, and models you can order. 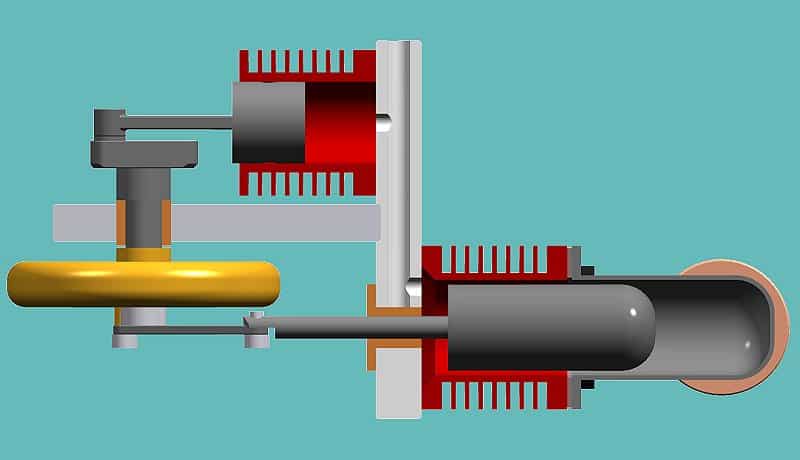 Typical layout for a model Stirling. This is the classic Kouhoupt model…

Jon Bondy: Has built several model Stirlings, has a Stirling design program on the site, and keeps octopus and cuttlefish as pets. How do you go wrong with that?

Low Temperature Difference Stirling: Run a Stirling just by setting it on top of a steaming mug of coffee.

A Tin Can Stirling: You can build a Stirling out of most anything, and need not even have machine tools.

Roy UK’s Stirlings: Several to choose from made from simple materials.

Logic System Technology: Several interesting designs including a super low temperature differential Stirling that runs just from the heat of you palm.

Stirling South: Nicely made CNC Stirlings from some college professors. Here is the main Stirling page. The rest of the site is also quite fun!

Wonktoys: Another “no machine work” site.

Alphonse Vassalo: Many finely crafted Stirling models including a 4-cylinder.

Daniel Lyonnet: Has built a number of Stirling models.

See-Saw Stirling: Not sure what one would use this for, but it would make for an interesting outdoor sculpture. A really novel Stirling design.

Barry Dunman: His “coffee table” Stirling is a delight.

Syl’s Hobby Page: Lots of engines and other HSM projects.

Jan Ridder’s Modelbouw: Many interesting engines on display, and he will send you plans too!

Free Piston Stirling from Japan that’ll run on a cup of coffee. Made by a company called JAXA. Here is a gallery of pix building one.

The Hermit’s Machine Shop: A few Stirlings similar to Rudy Kouhoupt’s including a Stirling fan.

Gold Stirling: Plans available, plus some gorgeous pictures of models.

Links to Other Stirling Engine Resources

Airpots: Marv Klotz says airpots/dashpots make great Stirling cylinders if you don’t want to fuss with making one yourself. This company sells airpots ready to go.

– Marbles are 12.5mm in diameter (half an inch), and so a 14mm test tube works well for a Test Tube Stirling. Not sure about other sizes. Test tubes are abundant on eBay and cheap! Be sure to use heat resistant pyrex.

– Minimize aerodynamic losses. Pay close attention to gas velocity. Watch sharp bends, abrupt changes in cross section, anything the higher speed molecules will dislike. Move gas in parallel rather than series. Keep the bore big and the stroke small, probably around 10% of the bore. Think torque rather than speed.

– Minimize dead volume. Strive to move 100% of the gas from heated to cooled space.

– Use the correct compression ratio. Even better, forget the compression and use the correct expansion ration. They are the same number, but expansion better reflects the conversion of heat to kinetic energy. The ideal expansion ratio is the square root of the ratio of average absolute gas temperatures taken at the hottest and coolest points in the cycle. Since any gas not fully heated or cooled reduces this average, that’s why heating and cooling as close to 100% of the gas is so important.

– Theoretically, you could double the pressure to get twice the work out of a Stirling. But twice the power means twice the heat energy in and out. If exchanger area remains constant, temperature losses will increase, and twice the power won’t be obtained. Higher pressure also greatly increases flow losses resulting in further power declines. HIgher pressures also require more material to contain the pressure. That material might have been better utilized providing increased heat transfer area.

The purpose of making the heater chamber longer than the cooler was to maximize the temperature differential between the two. Use of thin wall tubing and making the chamber walls out of something that doesn’t conduct heat so well (although it has to conduct the heat into the chamber, just not along the chamber longitudinaly) is also helpful.

Photos of Stirlings I particularly liked. These all came from sites in the links above.