This is a page on Solar-powered Stirling engines that generate electricity. I also have a page on model Stirlings.

Once upon a time, I came up with an idea that really started me thinking. Can Home Shop Machinists build a credible Solar Stirling Electric Generator? According to Sandia Laboratories, such a system is the most efficient way to translate the Sun’s energy into electricity. Their system is about 30% efficient, which is roughly twice what a photovoltaic system can do. Sandia, in conjunction with Stirling Technologies, has figured out how to build a 37 foot dish that is supposed to generate enough power for 8 to 10 homes. Apparently this is about 25 kilowatts.

My question is, how successful would a system be that was based on a concentrator the size of the “old school” C-band satellite dishes? These should be readily available as surplus, and they had technology to track the sun. Each one is about 6 feet in diameter. If we take the 37 foot diameter figure above, that big dish had a surface area of 1,075 square feet. A 6-foot satellite dish has a surface area of 28 square feet, or about 3% of that. Accordingly, if it can operate at similar efficiency, such a dish ought to turn out 5 or 6 hundred watts or so of electricity. Think of it as being the solar equivalent of a Honda power generator. Put up two of them, which still doesn’t take that much space on your property, and you have 1 kilowatt. Starting to be a respectable amount of juice. Presumably there is a tax break on it as well, but I’m no expert on that! If you want more juice, it’s going to take a bigger collector, I’m afraid, so the project may not be all that practical.

What I am curious about is what sort of Stirling engine is needed to power such a beast? It may be that the Sandia version is too exotic to fabricate and one would have to settle for a lower efficiency. I’m not too concerned about that. Even half as efficient is still just as good as solar cells (photovoltaic) and I’ll bet cheaper. Apparently they used a Scandinavian designed Stirling called a “Kockums 4-95 Stirling engine“. 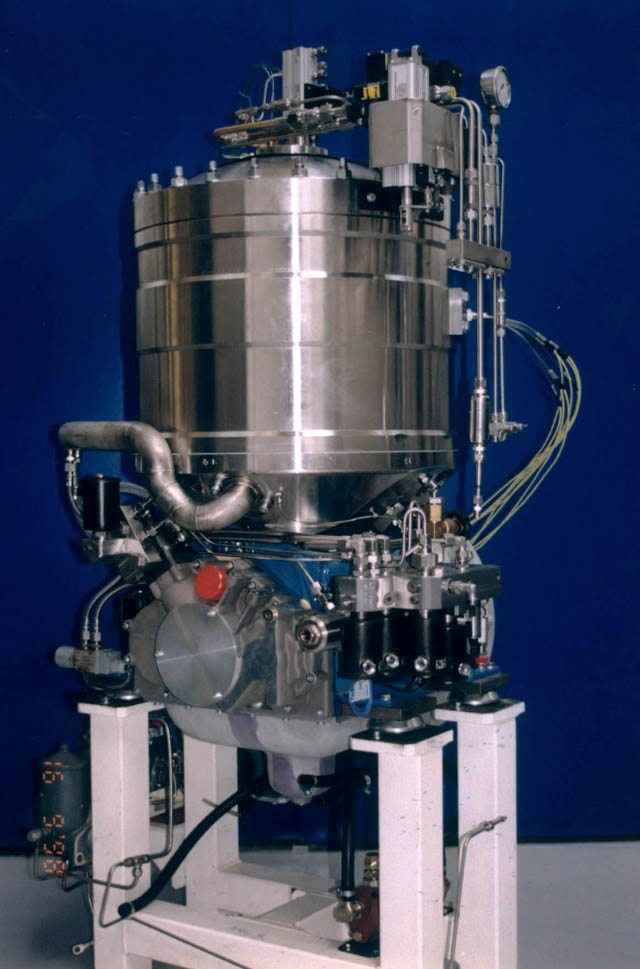 Apparently it was originally created to power submarines. It looks a bit imposing for the average home shop, but recall we only need on with 1/8 the capacity, so it will be considerably smaller. Considering what this one is capable of, it seems relatively compact. The one that was finally perfected for this solar application is even smaller than the picture above, and is apparently about the size of a 55-gallon oil drum. 1/8 of that is not small, but ought to be manageable for many home shop machinists.

This is where I run out of steam, so to speak. I’ve no idea what’s inside all of those intricate housings, and I haven’t seen plans for any large scale Stirling’s in the Model Engineering community. The best I was able to find is the Sunpower EG-1000 1 kilowatt Stirling generator, whose design looks simple, compact, and doable. The generator is an integral linear design, which is cool. A more detailed scientific paper is also available. Here is what a 1 KW version looks like: 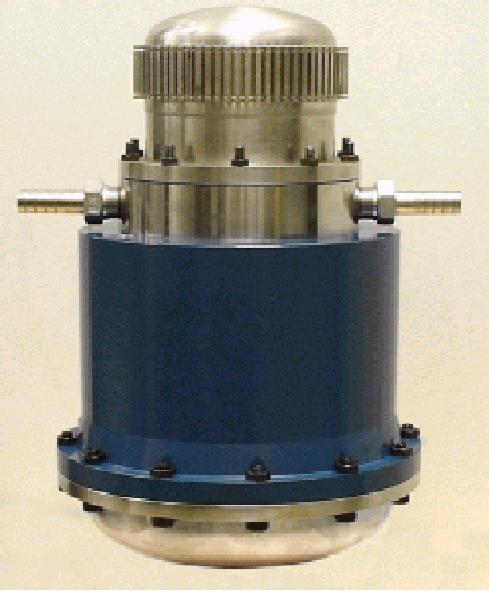 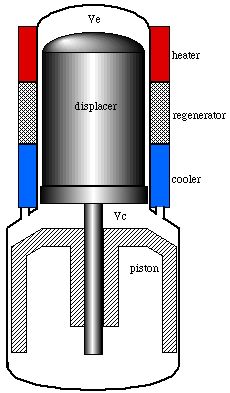 In practice, imagine flipping that drawing over so the focus of the parabolic reflector was the heat end. This particular unit is designed for water cooling. Just like the Sandia/Kockums unit, I would propose small (motorcycle?) radiators with a fan to cool the water on the side facing away from the solar collector. A few more factoids on the EG-1000:

I suspect it will require considerable experimentation to produce a workable Stirling for this application. It’s my understanding that they can be finicky beasts to get running and are very sensitive to friction and other factors. Were I to undertake such research, I suspect it would make sense to build the dish, measure the heat available at its focus, and then build a testing rig that delivered that heat via electric or gas fire so I could fiddle with Stirling engines in the comfort of my own shop.

The Rhombic drive is similar in design, but converts the motion from linear to rotary: 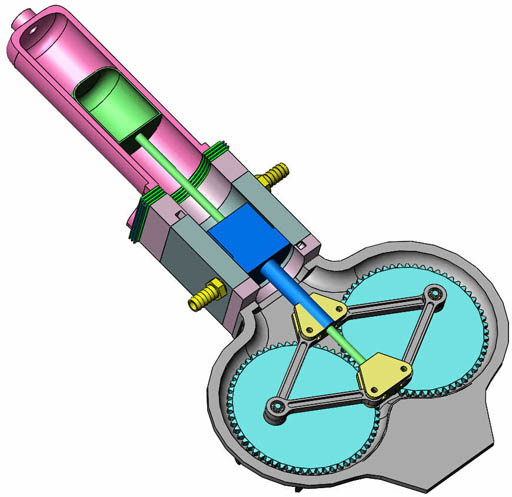 It seems to me that a working rhombic drive design could be considerably simplified as a free-piston linear design. Free-piston Stirlings need a load that is provided by the linear alternator/generator.

Big thread on CNCZone about Solar Stirling Power Generation : It has some interesting thoughts:

2-Cylinder “V” Stirling May Be A Good Bet for Power

Great Primer on How the Stirling Works

Nice spreadsheet walkthrough on how to design a Stirling engine

Interesting Update on the 5HP Stirling by Merrick Lockwood : The original 140 page book is available here.

Modeling and Simulation of a Free-Piston Solar Stirling

Nasa Guide to Stirling Engine Design: 300+ pages. One interesting comment is that Stirling engines running on air are only 20-25% as efficient as those that use helium or hydrogen as their working gas. Lots of rhombic drive models are analyzed in this text.