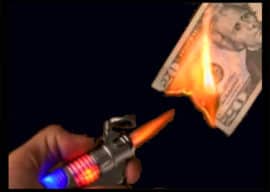 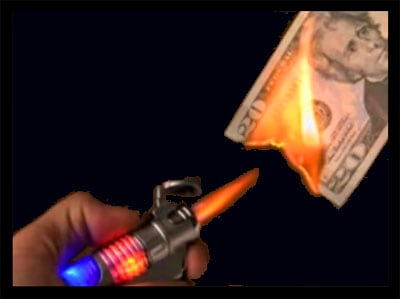 Here’s one thing for certain: if you can’t properly bid on jobs it’s going to be hard to manage your profitability.  If your quotes are too low, at the very least you’re not making as much profit as you could and at the worst you could be losing money on your bid.  If your quotes are too high, then you’re probably not going to be competitive and you’ll have to run through a lot more quotes than your competitors for each successful contract you win.  If the situation is bad enough, you may not be winning any business at all.

Recently, I came across a Modern Machine Shop article that suggested that the best shops have a 70% average quote to book ratio, while the average shop has a 51% ratio.  That means 70% of the quotes from the Top Shops win the business while the average shop is quoting two jobs for every one it takes to the bank.  The Top Shops are doing a significantly better job on their quoting process.

Quoting a complex part can be a lot of work.  A quote that doesn’t result in business is time and effort spent that is pure cost paid up front and wasted.  Ironically, shops that are not very good at quoting wind up wasting even more cost on it, which makes their overhead higher and their quotes even less competitive.

What’s the answer to generating competitive quotes that win the business as often as possible?

Quotes can be produced in many ways ranging from ad hoc pencil and paper with 10-key calculator to complex ERP software costing many thousands of dollars.  A lot of the quotation software available in the market is focused on making it easier to produce a quote and on making quotes more consistent.  Both of these things make sense, but they don’t say a lot about how to make quotes more accurate.  How can you possibly generate a good quote unless you’re sure it includes an accurate reflection of what it would actually cost your shop to make the part?  Somehow or the other, you’re going to have to find a solution that lets you accurately model the manufacturing process your shop would use to create the part.

Accurately modeling the manufacturing process may be easier said than done.  For example, if you take the time to run the part you’re bidding on all the way through your CAM process, generate the g-code, then simulate it using a tool like G-Wizard Editor, you’ll have an extremely accurate idea of what that part would cost.  You will also have spent a fortune in time (time is money!) generating a quote you might not get the business for.  It’s probably worth it for some jobs, but can you afford to do it for every job?  I’d save this approach for a time when you have an opportunity to land a big new customer.  They’re asking for a quote on a long term supply of parts that they’re willing to put a lot of money behind.  Hopefully the parts aren’t too crazy complicated and you just want to get out your sharpest pencil for this bid knowing that if you land this deal, there’s a lot more business where that came from.

The opposite end of the spectrum involves looking over the prints and trying to work up an estimate from there based on what prior similar parts cost to make.  If your parts are sufficiently standardized (gears or fasteners maybe?), maybe you can take a similar job from the past, add a “fudge factor” and go from there.  The less standard the bid you have to make, the less well this approach is going to have to work.  In the end, it isn’t really simulating the manufacturing process so much as it is trying to do a comparative quote based on some other manufacturing process.

Getting back to simulating that manufacturing process, a good approach is to do the quote as a set of “building blocks” of operations.  You take a look at the print and make a list of the features in it.  There’s a pocket, 4 threaded holes, some outside profiling, and some face milling to true up the top and bottom.  From that list of features, you can proceed to generate an estimate.  You need to take your list of features and compute what it will take to machine each feature.  You can add to that various  other costs for things such as deburring, anodizing, fasteners, consumable tooling, and the like.  This is an area where software can really help streamline the process.  At the very least, you could envision creating a spreadsheet where each row of the spreadsheet is one of the features or operations needed to make the part.  In the row, you capture all of the information needed to calculate the cost of the part.  Ultimately, the cost will be measured in dollars, but it is typically driven by time at an hourly cost plus other discrete dollar inputs.

Okay, so how do we generate a spreadsheet like that?  Should we even be trying?

There’s a fundamental trade-off between dedicated software and spreadsheets.  Spreadsheets excel (pardon my pun!) at being flexible.  They’re a programming tool anyone can “program”.  Dedicated software excels at consistency, efficiency at doing the same thing over and over, formatting, database functions, and on integration with other software such as your billing and accounting software.  You could use a spreadsheet to do everything, and for smaller shops, it is probably the best solution.  But, the more you want to integrate your workflows from quote to tracking parts on the shop floor to billing the finished job, the more you’ll want to bring in some packaged software.  The larger the scale of your operations, the greater will be your need to stay organized, to enforce the rules, and to keep database-style records of everything that goes on–another good argument for packaged software.

There’s an ideal mix, though.  If you run purely packaged software, you will lose that flexibility and quick response that spreadsheets are so good at.  We’ve all wrestled with cumbersome ERP or other systems that seemed like they were doing more to help the bean counters in the back room than to help us actually get quotes out and grow the business.  That ideal mix is to do the initial quote with the aid of a spreadsheet, massage it with maximum flexibility, and then pump those results on into packaged software when it comes time for your organization to need the benefits of the packaged software.  It is that initial spreadsheet that going to govern the accuracy and quality of your quotations.  Sure, you want to make sure information gleaned from prior quotes can be factored in, but most of the rest of the process after building the quote spreadsheet is paper pushing automated and facilitated by computers and software.

Given that we like the idea of a spreadsheet, and we probably started from there anyway, let’s see about creating one.  You could build it by hand, and if you’re doing so, we recommend you keep a tool like G-Wizard Calculator by your side to refer to.  What better way to generate a good quote than to use the same Feeds and Speeds to evaluate how fast you can machine the part as you would actually use when making the part?  While many quotation software packages include feeds and speeds, we believe it is a mistake to use them unless you plan to use the very same feeds and speeds for your manufacturing.  Using different feeds and speeds is the same as trying to do a quote based on the specs of a completely different machining center than the one that sits on your shop floor.

To set up a spreadsheet whose rows represent each machining operation, you’ll want to make sure you capture all the essential information:

1.  Which feature is being referred to

3.  What are the dimensions or parameters of the feature that determine how long it will take to machine it?  For a pocket we’d want to know it’s depth and inside corner radius (determines tool choice, deflection, how fast we can feed, etc.) as well as the perimeter of the wall (so we can calculate time for a finish pass on the wall) and volume of the material to be removed from the pocket.  Put all of that in as columns of the spreadsheet, and you’ll need some other columns for other feature types.

6.  Feeds and speeds:  remember, we want these to be as close to the actuals we’ll use as possible.

7.  MRR:  Useful to calculating the time for the op.

Those are the basics, plus you’ll want columns for notes and comments and that sort of thing.

Putting all that together by hand and running around filling in all those blanks can be a fair amount of work.  Because of that, we created G-Wizard Estimator.  Estimator is an inexpensive product specifically designed for creating these kinds of estimate spreadsheets.

G-Wizard Estimator uses the same Feeds and Speeds technology found in GW Calculator.  That makes it very easy to run through a list of machining operations and crank them in.  Once you’ve generated an Estimate in CADCAM Estimator, push a button and it is converted to a spreadsheet that you can further customize and then feed in to the rest of your Cost Estimation Software.  Here’s a quick video of the first Beta release of Estimator in action:

The video gives a good impression of how easy it is to quickly go through the CADCAM Wizards and generate a detailed estimate for those machining operations.  We provide a lot of other useful facilities beyond just the CADCAM Wizards.  For example, we offer an hourly machine cost calculator.  A lot of shops use the notion of hourly rate on machines to help with job cost estimation and quotation, but there’s not a lot of information available about how to calculate a good hourly rate to use.  Here’s what the CNC Machine Hourly Rate Calculator looks like: 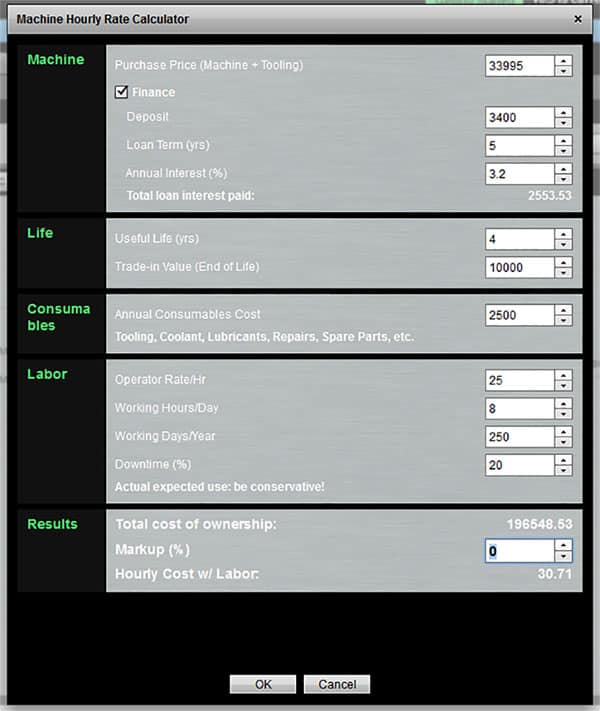 There’s a lot more to come in G-Wizard Estimator, but even the early versions available now can start to help your shop generate better, more accurate quotes more easily.

Another great article to check out is the results of our 2018 Cost Estimation Survey.  It’ll tell you what other shops say they need most from their Quoting Software.