As in turning on a lathe with the workpiece not concentric with the spindle axis. This is a common need when building engines, for example, to machine the throws of a crankshaft, or the eccentric drive used by a steam engine to operate a slide valve. I was recently doing drawings for a steam engine that included an eccentric and became interested in figuring out how to machine such a part conveniently. As usual, the Internet is a fount of knowledge for those who are patient Googling about for the answers. What follows are some suggestions for would-be eccentric turners. A variety of different solutions are possible. The one you choose will be a function of how much tooling you’d like to make, how many eccentric parts are needed (one off, or small manufacturing run of 500?), and what strikes your fancy. I mean to try several of these over time. I present them in more or less the order I found them in.

I thought this technique used by Mcgyver for his Stuart Tripple Expansion Marine engine was clever. It’s a great method to use for one-offs, though centering three axes across many parts would be slow! 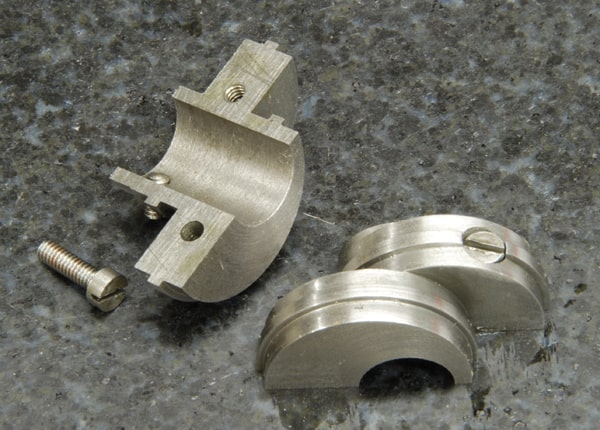 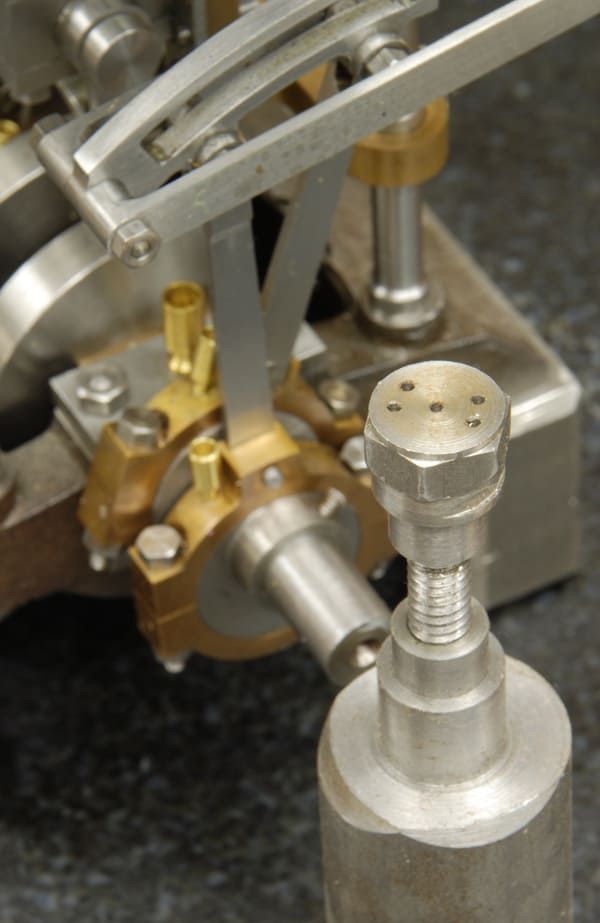 The secret is in this arbor and those 5 holes. Mcgyver used a wobbler in the tailstock while holding the workpiece in a 4-jaw chuck to line up on each of the holes. The holes were located on a mill using a DRO.

If you prefer an indicator to a wobbler, try this rig: 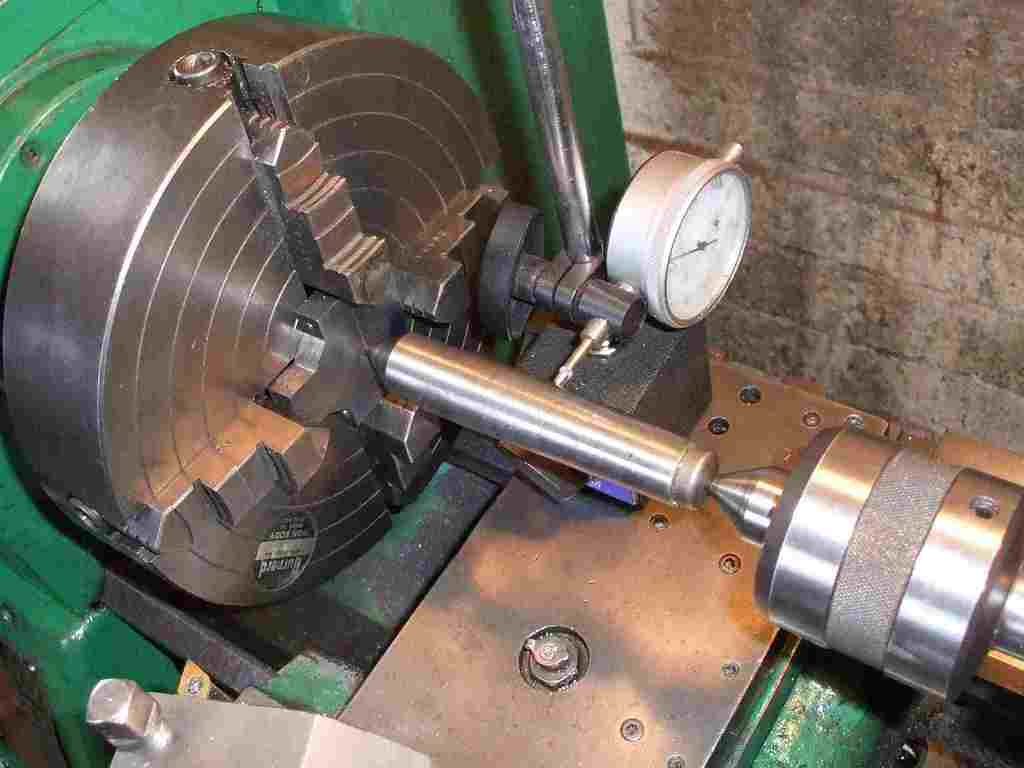 Dial in whatever the point rests in on the part…

Hillmar built a similar gadget and used his lathe and a spindle degree wheel instead of the mill with DRO to set up the wobbler punch marks: 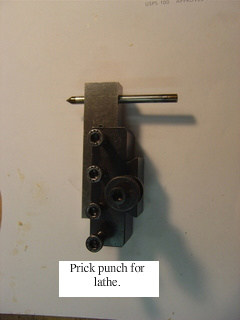 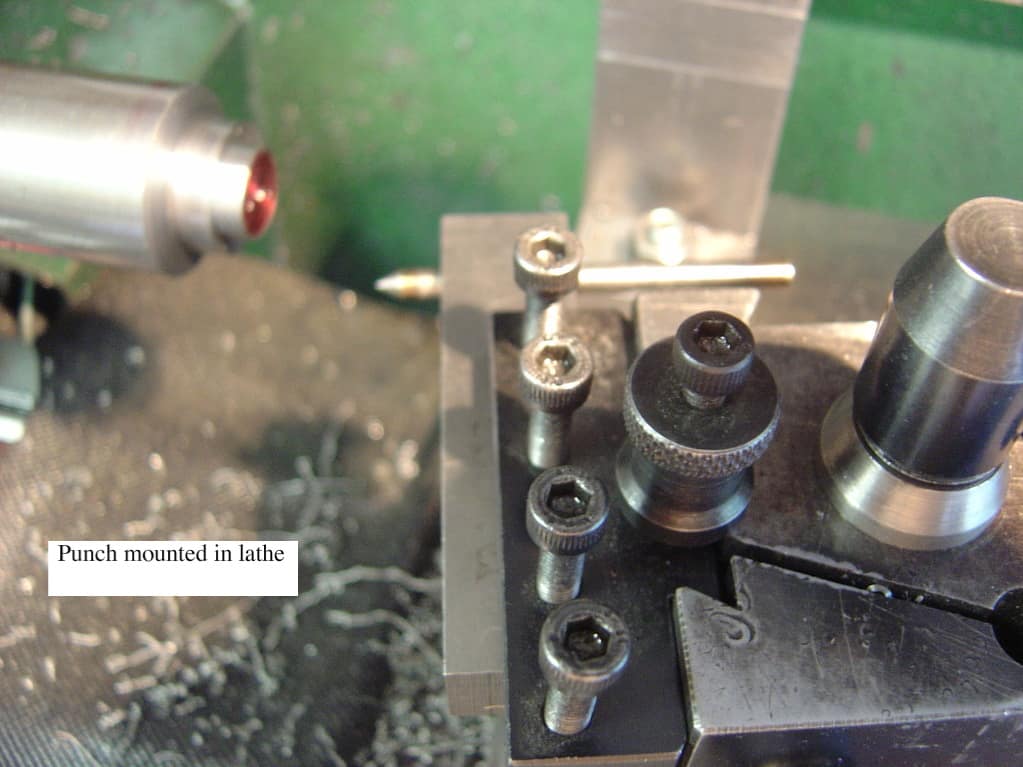 Here is Hillmars prick punch on a QCTP holder… 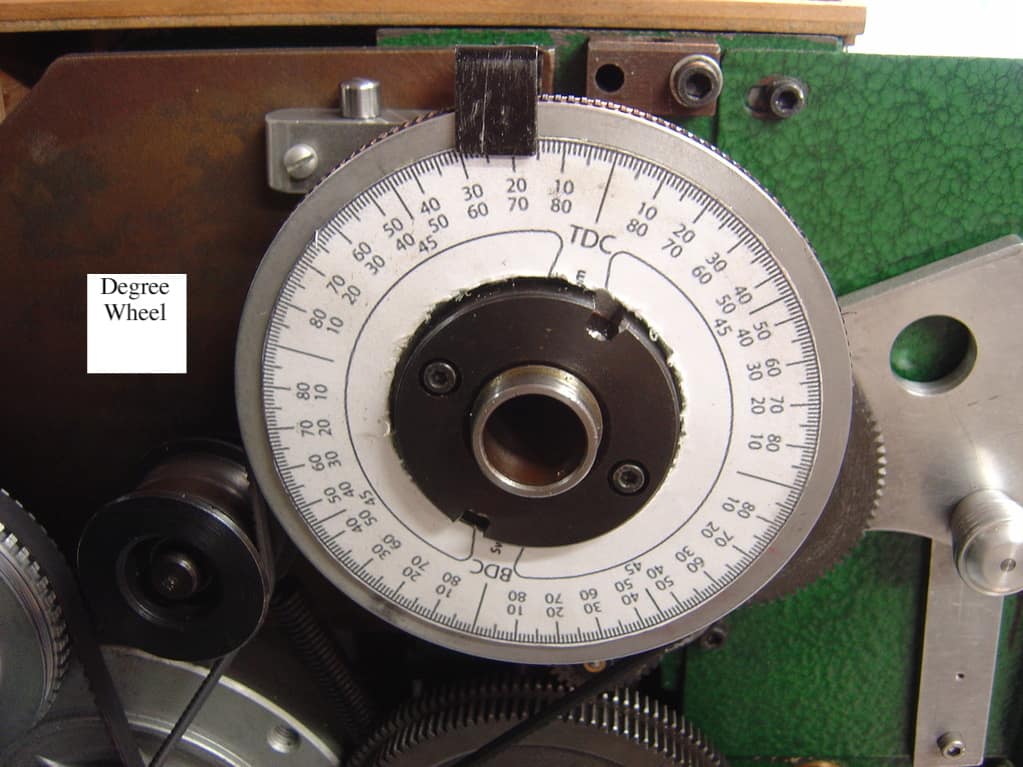 A simple degree wheel of printed paper. This one looks like it was made for camshaft and other engine timing. Rotate to the appropriate degrees, use the cross slide to set the offset, and fire the prick punch… 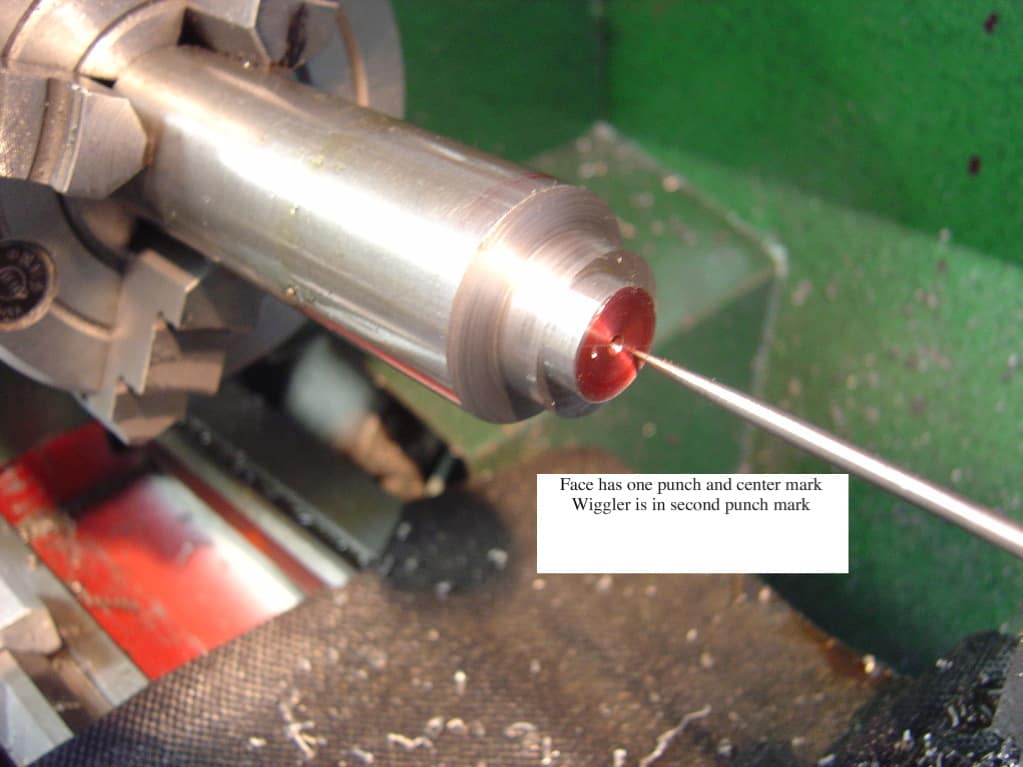 This is a very cool method I thought. Cheap and cheerful with no need to make an arbor. The prick punch holder and degree wheel should be handy for a lot of other purposes too.

Here is a quick way to offset–just shim a concentric chuck such as a 3-jaw, a 6-jaw, or a 4-jaw with scroll. Simply insert a shim under one of the jaws to shift the work off center by that precise amount. This idea came from Shred who used it to make some offset clamps for his mill. You can’t get multiple offsets at arbitrary angles the way you can with the above methods, but you can’t beat the ease with which this method could be applied!

It will take a little trig for you to figure out exactly how thick the packing shim needs to be to create the desired offset. To save you the trouble, Marv Klotz has a handy program called ECCENT that will figure the packing thickness to achieve any desired offset for you.

Here is an example of what happens: 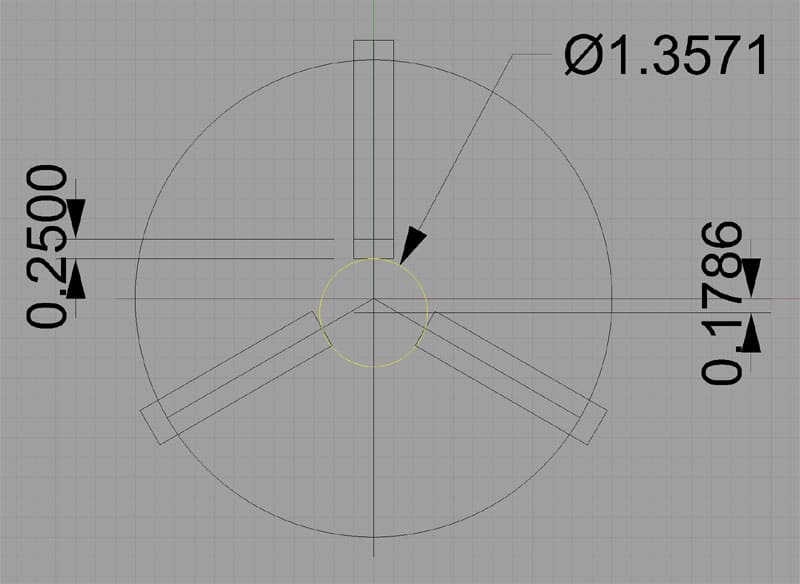 This is a technique where’d I’d want to do a little CAD drawing to make sure I had the packing just right for what I was trying to accomplish. Of course the well-known inaccuracies of a 3-jaw chuck will also make this operation less accurate than others might be. Since we likely won’t be able to machine everything without changing the setup.

For Shred’s eccentric clamps, such inaccuracies just didn’t matter, he wanted an offset for clamping purposes and the exact amount of the offset was irrelevant.

Here is a photo of Rake60 (owns the HMEM board) turning an eccentric using this method: 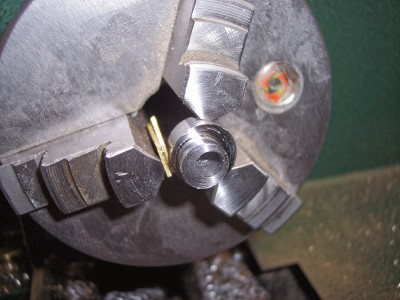 Simple to do, eh?

Frank Ford Indicates a Collet Block in a 4-jaw 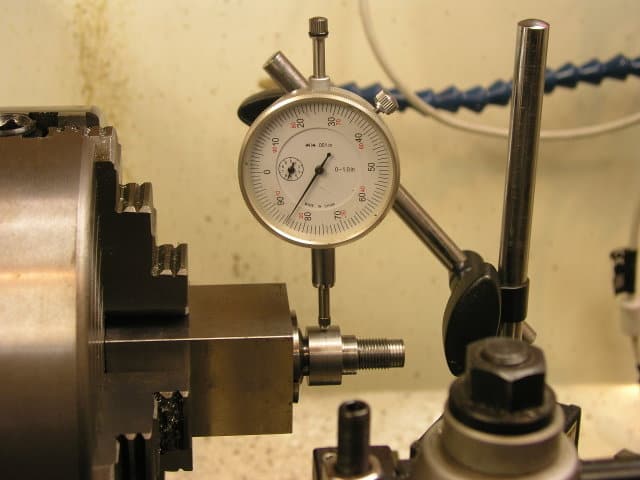 You can do wonders with a 4-jaw, a collet block, and an indicator…

Stick a collet block in the 4-jaw, and indicate the part until it is centered. Now with the jaws straight up and down you can use the dial indicator to measure exactly how much you want to move the part off-center. You could also use a tool as a work stop and the cross slide to measure the offset. The charm of this approach is you don’t need an math or programs because you can directly see the offset being indicated in. Come to that, You could do the same think with a hex collet block and a 3 or 6-jaw with a set of gage blocks until you got the packing right too. I’m sure I’ve mentioned it before somewhere but collet blocks sure are handy!

Thanks to Oldmechthings, I became aware of this unique fixture. It’d be handy if you had to do very many eccentrics: a sliding block faceplate: 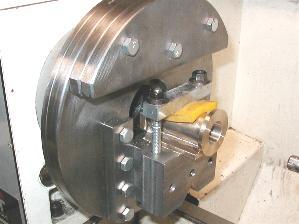 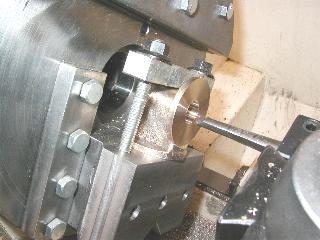 This faceplate has an ajdustable off-center slide that also serves as a clamp. Sweet!

Here is another version of the sliding block face plate: 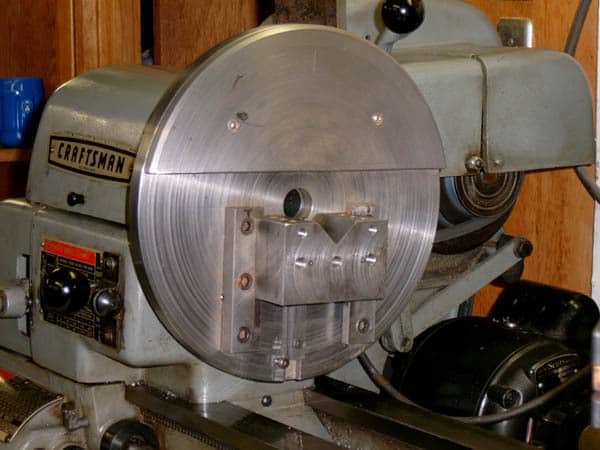 And another built from a book by Marlyn Hadley called MODEL MACHINES Replicas Steam Models: 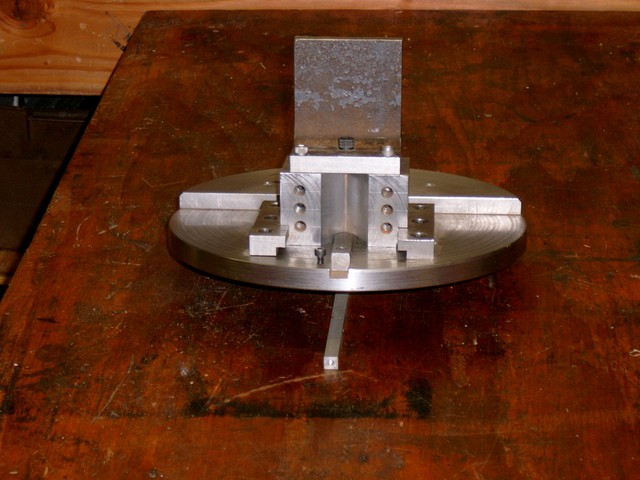 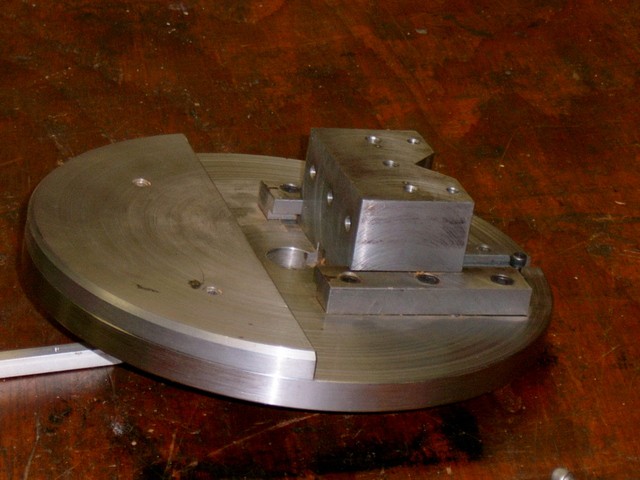 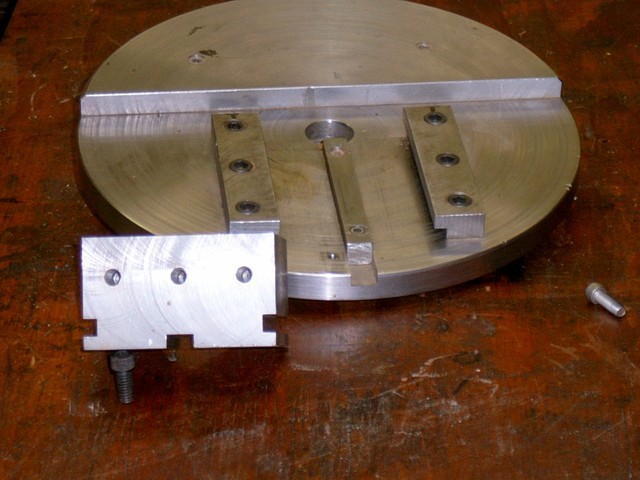 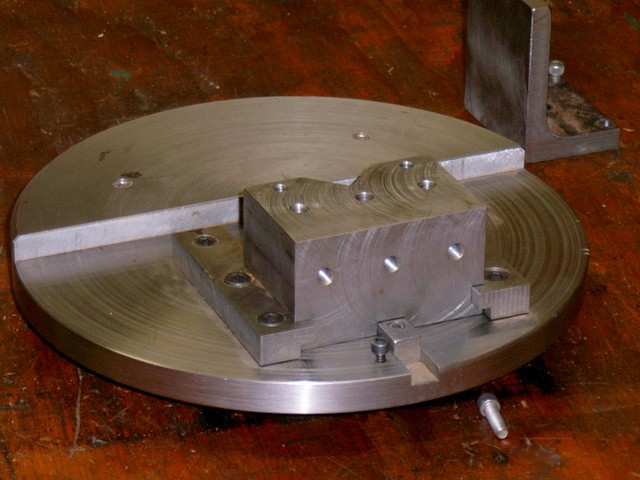 I keep thinking there is a way to design one of these with a precision screw to allow precise calibration of the eccentric offset.

The English have a thing they call a Keats Angle plate that can be attached to an existing faceplate to create a similar fixture:

I like the idea of a set of “ways” that move the slide in a precise way better. Put a screw on that bad boy and dial in whatever you’d like very easily!

This was an interesting suggestion. You can cut what’s called an interpolated circle on a CNC mill. The idea is to make an expanding (or other) arbor that has the offset built into the arbor spigot. Then you just drop your part onto that arbor, tighten, and it is not off center in the lathe by the desired amount.

I love this tooling: 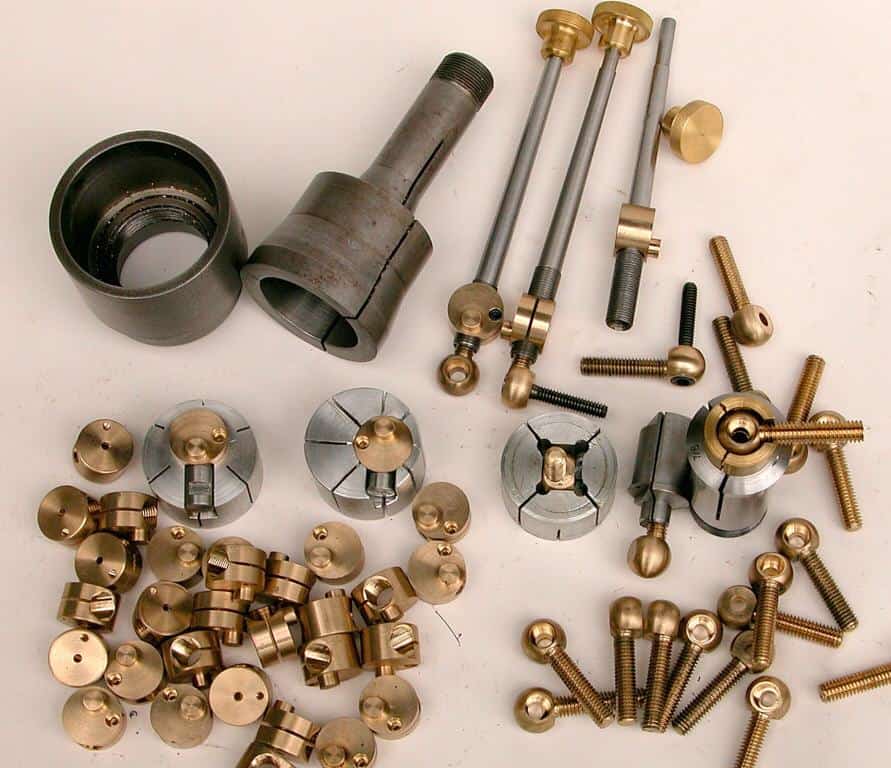 There is a treasure trove of ideas in this one picture. Note the little keys and things to line up each part in the correct insert at the right angle.

This, it seems to me, is the way to go if you had to make 500 of some small part with an eccentric feature. The inserts are evidently fairly easy to make. They can be either aluminum or steel, but steel lasts longer. Cut the compression slots on a bandsaw. He made the offsets on the mill using a dividing head. CNC ought to work well too.

Here is another approach I’ve seen a number of times: 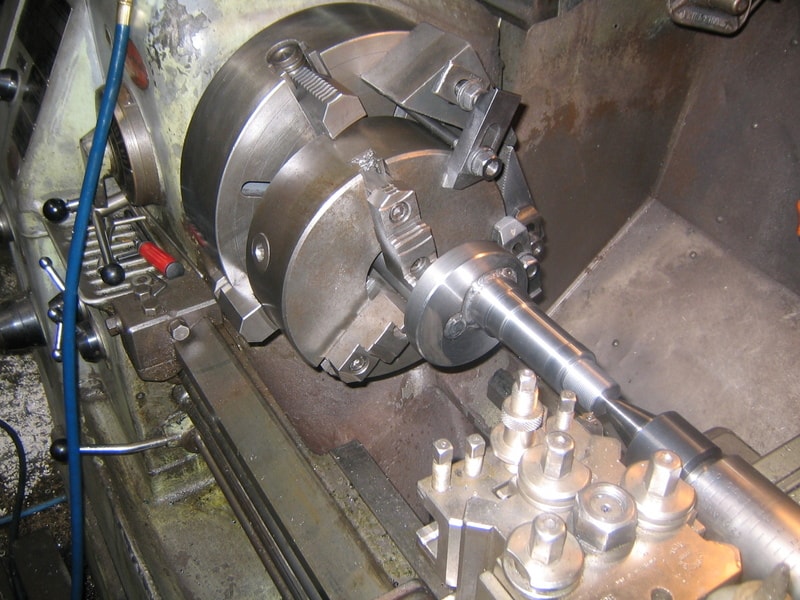 Note the counterweight clamped in place…

An Eccentric Turning Fixture for the 3-Jaw

I loved this idea presented by Wareagle on the HMEM board. It involves making a fixture to fit the 3-jaw chuck that holds the workpiece off-center. The piccys are pretty self-explanatory: 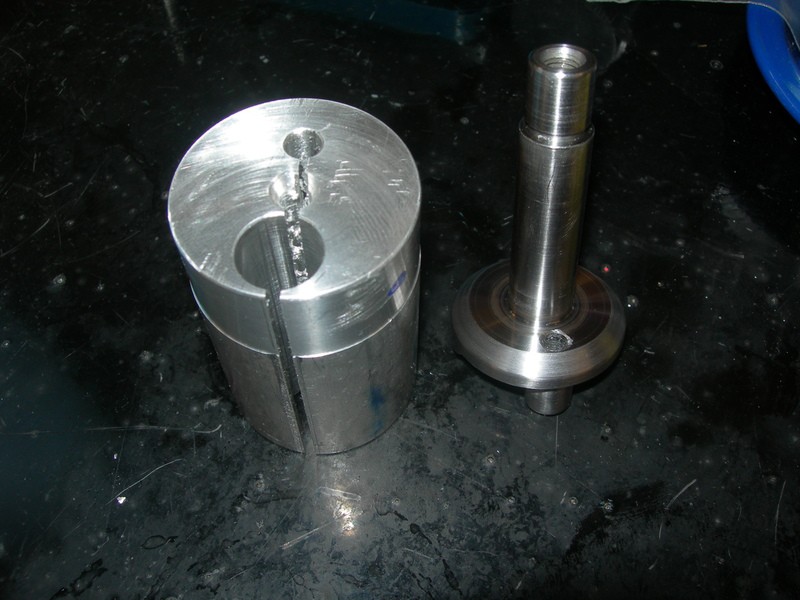 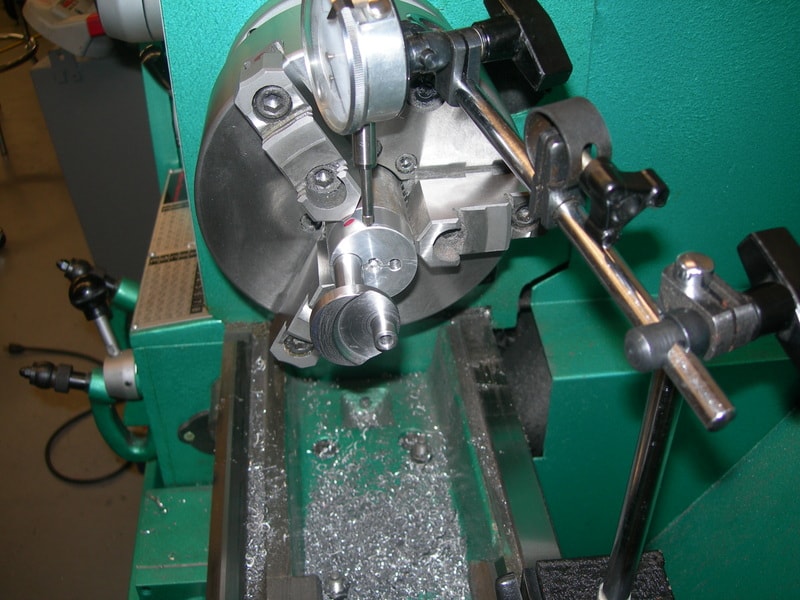 Such a fixture would be very easy to make with a mill and lathe. Turn your fixture, bore an offset whole in the mill, and then slit the side so it can “grip” the workpiece.