This article is part of CNCCookbook’s G-Code Tutorial.

As was mentioned in the article on G71 Type I, the Type II cycle is suitable for profiles with pockets. Profiles that have no pockets are called “Monotonic”, a term you may have seen either in your controller documentation or perhaps as an alarm on your code if you’ve been playing with G71.

Look at your profile, once past the first line that positions to the profile start. If you can follow the profile and never have it go deeper in the cut than that starting point, you have a monotonic profile that has no pockets. Put another way, and the reason it is called what it is, the profile is “monotonically increasing” (or decreasing depending on cut direction). It never changes direction in terms of the X axis.

Note that your profile needs to be monotonic in Z too. You can’t double back and create an undercut. G71 is still very useful as Type I (the only thing the first G71 capable controllers offered), but Type II is quite a bit more powerful. Here is a profile for a candlestick that would require a Type II G71 because it isn’t monotonic: 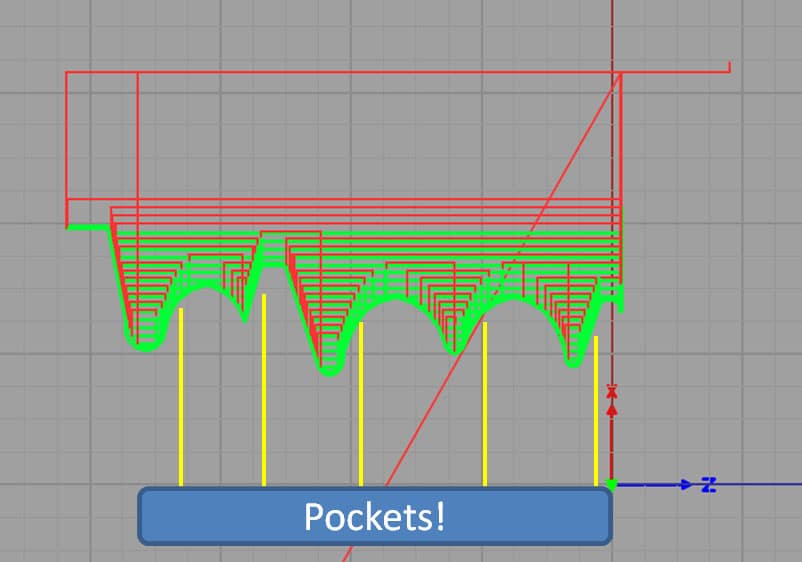 Each downstroke marked in yellow creates a “pocket” that Type I G71 can’t do.

First thing’s first: your controller has to support Type 2 cycles or you won’t get very far. Assuming it does, the choice of whether to function in Type I or Type II mode is based on the first line in the profile–the one the “P” word identifies. For the XZ plane, if that line only moves in X (depth of cut), the controller assumes you want a Type I cycle. If it moves in both X and Z, it assumes you want a Type II cycle.

What if you don’t want to move in both directions on that line?

The answer is you need to trick the controller a bit. Use a relative move of “0” on that dimension. For controllers that support UVW, this is very easy–just throw in a “W0” and it’s done. If you have to use G90/91, it’ll be a little more trouble, but that’s what you do.

Other Differences Besides Pockets for Type 2

It’s interesting that controllers that support Type 2 continue to support Type 1 as well, because there are some decided advantages to using Type 2 even when your profile has no pockets. Perhaps the compatibility was kept to keep legacy part programs running, but that would have been easily handled in some other way. Nonetheless, controllers are either Type I only or they support both.

Type II performs retracts differently, and many would say better. When you run a Type I cycle it leaves a stairstep pattern behind with the step size being the roughing depth of each pass. With Type II, the cut follows the profile instead of performing a 45 degree retract.

The stairsteps of a Type I retract means the cutting forces vary quite a lot on the finishing pass depending on whether the cutter is in the heavy meat of a stairstep or the lighter part of one. The worst case is when the profile is at about 45 degrees and the stairstep has equal thickness in X and Z. For many machines, the surface finish on the last pass will vary because of this. Sure, you can tweak the different allowances and make sure you change tools for a real G70 finish pass and get it pretty good, but a lot of machinists have found that when they get rid of the stairsteps with a Type 2, it’s just easier to get good finish. They can often cheat and not change tools and still wind up with an acceptible part, which saves time and money.