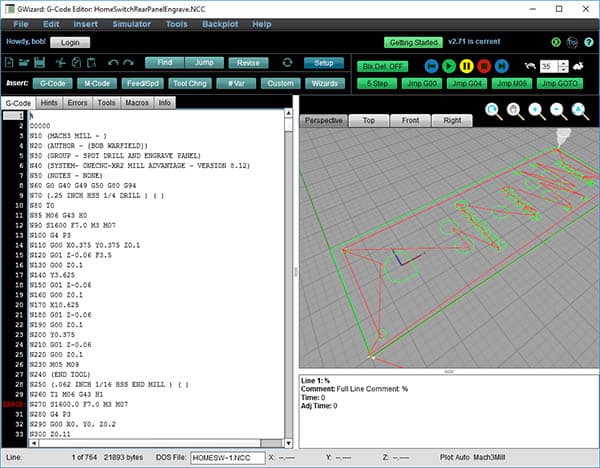 The releases above will be our last Mac release.  We'll leave them up until they won't run on Mac, then we'll take them down as well.  We recommend you run G-Wizard on Windows, either on a PC, or on your Mac using a virtual machine.

I am personally sorry to see the Mac go.  I own multiple Apple products, and am a committed Mac user, especially where my music software is concerned.

Oh no!  Why did you stop supporting Macs?

The short answer is not enough Mac users to offset the increasing pain that Apple has caused developers who want to support the platform.

In the period from October 1, 2019 to April 22, 2020, a little over 6 months, only a little over 300 people logged into G-Wizard from Macs.  By contrast, there were about 10,000 Windows users who logged in during the same time.  We see similar results for the percentage of people browsing our web site via Mac OS vs Windows, so it isn't just G-Wizard.  CNC'ers, as a group, don't seem to be strong Mac users.

It's not surprising, as very little CNC software will run on a Mac.

I'm making this decision in the depths of the Covid-19 situation as well, when business has been depressed and it is important to focus scarce resources.

This is compounded by Apple making it more and more difficult for developers to support the platform, especially small developers like us.

Apple has changed the requirements to run apps with the latest Catalina version of OSX.   Before Catalina, it was possible for developers to self-certify their applications.  That's the model essentially all general purpose computers have used since the beginning.

With Catalina, that's much harder.  The preferred method is for Apps must go through Apple's App Store.  That's considerably more overhead for small developers like ourselves.  It also means that new features and bug fixes will arrive on the Mac platform more slowly than on the PC Windows platform.  We think that's a shame.

We spent time investigating what it will take, but we do not have a version that will install on Catalina via the App Store at this time.  Even Apple realizes Catalina is a real curve ball as they have announced they would temporarily (slightly) relax Catalina's requirements.  We are taking advantage of the extended timeframe by releasing versions that will install via download on Catalina.  We consider those versions to be in Beta Test.

One of our greatest concerns is that having sealed off OSX from self-certified apps, Apple will be in a position to demand a revenue share from every app that runs on their machines.  They already do this for mobile apps on iOS and that share is substantial.  We have had iOS prototypes of our software running for years, but did not choose to bring them to market because the Apple revenue share is just too expensive.  If they choose to implement a revenue share on OSX apps, that may mark the end of our support for the Apple platform.

Apple has never been a big player in the CNC world.  Users running on Macs only amount to about 4% of traffic to the CNCCookbook web site and a similar number of sales of our software.  As a small business, we can't afford an inordinate cost in supporting the platform.

At some point in the future, we hope to be back on the platform.  This will probably happen when we develop thin client (i.e. browser-based) versions of our software in the not-too-distant future.

PS  It is possible to disable this Catalina function, and potentially install and run G-Wizard anyway.  I'm not fond of this option if only because it isn't something Apple supports and recommends.  But, for those that have no other way to run software not set up for Catalina, it may be useful.