The High Cost of Tight Tolerances

We’ve all heard the stories about part drawings coming through that specify ridiculously tight tolerances.  We know that holding tight tolerances is harder, and we know it is more expensive to make a part the tighter the tolerances are.  But how much does it cost to have tighter tolerances really?

I came across this great chart from the University of Illinois that quantifies the relative costs of various tolerances: 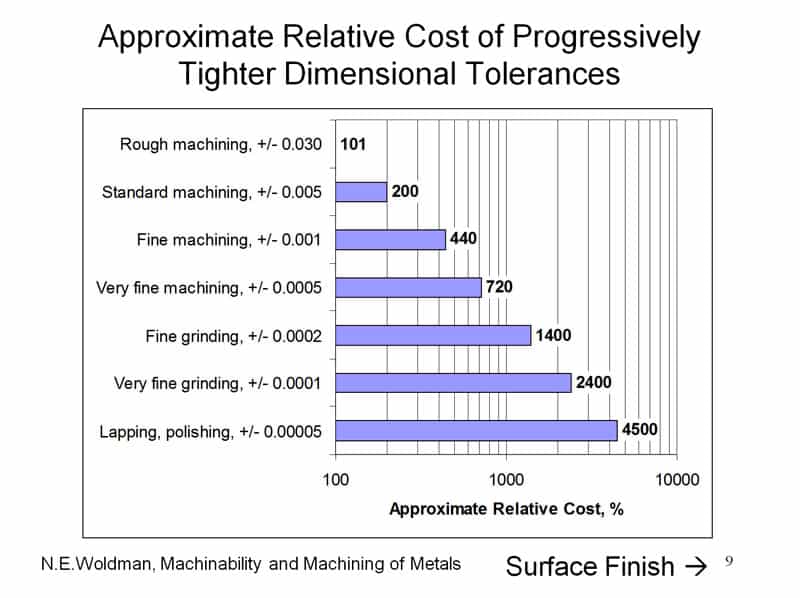 Starting with rough machining (a tolerance of 0.030″), we can see it costs roughly twice as much to make the part with an accuracy of 0.005″ and four times as much to take it to 0.001″.  That mythical 0.0001″ tolerance, and I say mythical because it is often overused as a bragging point, will cost 24 times as much to do!

CNC’ers are used to being able to quickly create large relatively precise holes using a process called interpolation.  It’s easy to do, but there are limits to the tolerances it can hold.  When you encounter those limits, you need to add an extra step that involves using a Boring Head.  Just scanning through our article on Boring Heads will make it obvious why that little extra tolerance that’s too much for interpolation is so expensive.

As a commenter pointed out, the data above came from a book published in 1951.  Has CNC radically changed these figures?  A little, but not incredibly.  Here are some University of Ohio figures that reflect the CNC age: 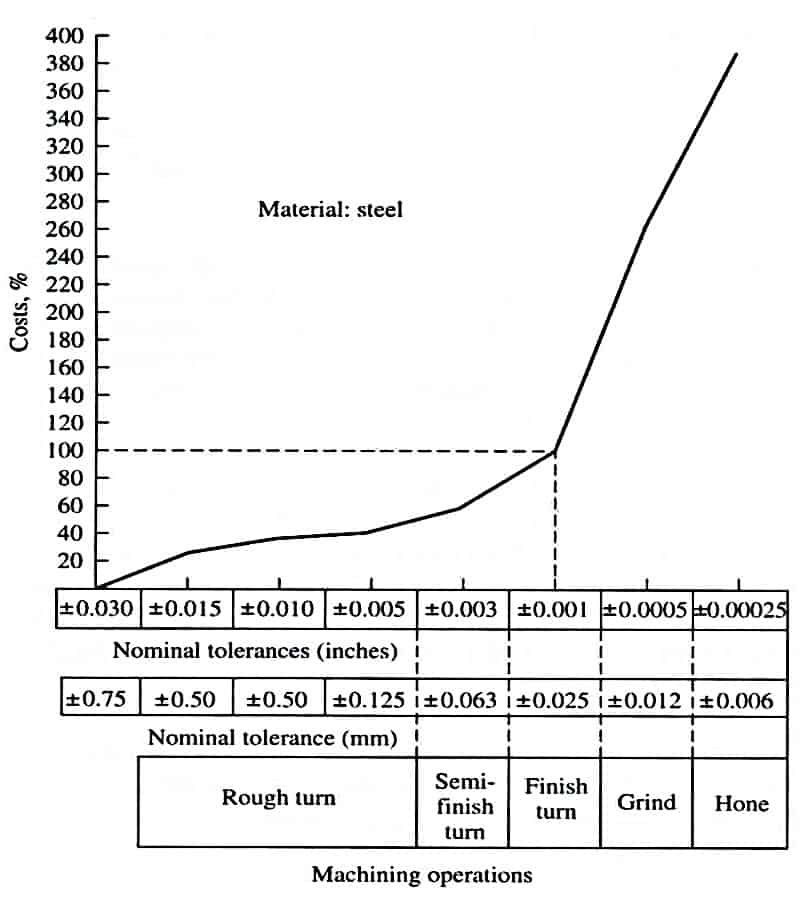 The thing to note is that while the absolute differences in costs have changed somewhat, the shape of the curve is still logarithmic.  Costs still go up exponentially as tolerances are made tighter, they just ramp up more gently.  Going from 0.001″ to 0.00025″ costs about 4 times, which is pretty similar to the older figures.  If CNC has is helping, it is largely at tolerances greater than 0.001″.

Before committing a part to manufacturing, be sure to do a careful inventory of the tolerances and make each one is as relaxed as it can possibly be.  We’ve written a guide that offers tips on how to reduce the cost of manufacturing at the design stage, a field known as “Design For Manufacturing” or DFM.

Consider also how you’re specifying tolerances.  The old-fashioned way is to slap +/- tolerances on every dimension (or perhaps specify a default for dimensions that have no tolerancing).  But Tolerances are nuanced.  The more modern approach is called Geometric Dimensioning and Tolerancing or GD&T for short.

Consider just the lowly tolerancing task of specifying the position of a bore center.  This can be pretty important for some applications and hence can attract some tight tolerances.  The bore is round, but if you think about simple +/- tolerances along say X and Y dimensions, they specify a square region.  So, we’re putting a round peg in a square hole? Imagine the red is the allowable area for the bore center, so we try to capture it with +/- dimensions and get the yellow square…

Imagine the red is the allowable area for the bore center, so we try to capture it with +/- dimensions and get the yellow square.  But the rub is that it really is okay if the bore center falls outside the yellow square as long as it doesn’t fall out side the red area.  In fact, we’re having to use overly tight tolerances because the shape of our tolerance zone doesn’t match our needs.  The drives up the cost of the part needlessly.

GD&T recognizes this problem and introduces a type of tolerance called True Position.  You guessed it–True Position allows a circular tolerance zone and is ideal for our problem.  It actually allows looser tolerances and can therefore lead to a part being cheaper to manufacture.

If you’d like to learn more about Geometric Dimensioning and Tolerancing (GD&T for short), check out our free mini-course on the topic.