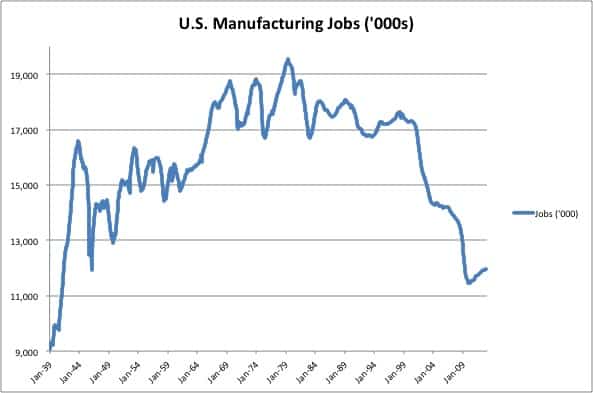 Some important points to know about manufacturing in the US:

–  Manufacturing in the United States produces $1.8 trillion of value each year, or 12.2 percent of U.S. GDP. For every $1.00 spent in manufacturing, another $1.48 is added to the economy, the highest multiplier effect of any economic sector.  (The italics are mine, and put there for those who think the US is better off not worrying about manufacturing).

–  Manufacturers in the United States perform two-thirds of all private-sector R&D in the nation, driving more innovation than any other sector.  More food for thought, lest we think we can let the manufacturing jobs go.

Despite these obvious benefits (and there are many more) of a healthy manufacturing sector, as a nation, we’ve let manufacturing jobs fall off a cliff.  Most people I talk to feel like US Manufacturing declined a long long time ago–during the 1980’s.  But, if we look at the data, it happened a lot more recently than you might think:

The decline of US Manufacturing jobs…

The US Manufacturing decline was sudden, and fairly recent.  Looks like the crash came in 1999.  Before that, we had a cyclical manufacturing economy, and growth was flat because of the productivity increases that came from the many manufacturing innovations ranging from widespread adoption of carbide tooling to the emergence and then dominance of CNC.  You can see that productivity gain graphically if we compare employment to production output: 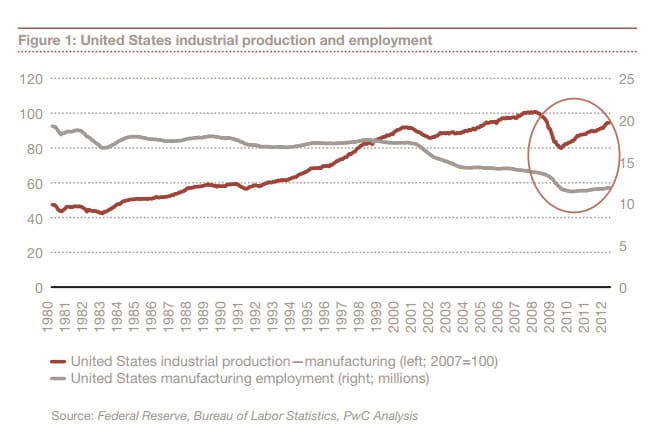 To this day, the US continues to have some of the highest productivity numbers for workers of any nation in the world.  Nevertheless, the sudden drop in 2009 is very obvious on these charts too.

There is cautionary good news right at the end there as the curve begins to turn upward more recently.  Clearly it has a long ways to go, but I think it’s worth looking at some of the forces that brought it down because many of them are reversible.  For those who say we can never have a strong and vibrant manufacturing economy again, I say that’s up to us to win or lose.  An important first step is to educate ourselves about why things got to be as they did so we can be on the lookout for how to counteract those forces, or at the very least, we can make sure our elected representatives are looking out for our best interests.

When I first saw the chart of US Manufacturing Jobs, I was reminded of events that happened to my father as I was growing up.  We were living in West Texas and he was a geologist working at finding oil in the oil industry.  It was a good living for him, though we were by no means wealthy–just happy middle class.  Then something happened that changed his world forever.  Shortly after he turned 50, the domestic US oil industry crashed and he was unable to get work anywhere.  The oil market was manipulated by OPEC and various anti-oil domestic special interests, and pretty soon the drilling rigs were “stacked” and rusting away in their yards.  Everyone would have predicted back then in the 1970’s that the US Oil Industry was done and there’d be no point to it in the future.  In fact, I just visited Houston, Texas last Thanksgiving and the US Oil Industry is thriving.  It’s doing better than ever–I doubt anyone who lived through that crash that wiped out my father’s career in the 70’s could’ve guessed.

I believe the same is possible for US Manufacturing largely because the problems that people claim stopped it are more akin to the market manipulations we’ve seen in the Oil Industry.  US Manufacturing succumbed to a variety of factors that are either misinterpretations (offshoring is universally good, there are no disadvantages, and you can’t help but save a fortune) and manipulations.

Let’s start with manipulations, and in particular, the currency exchange rate between China and the US:

Number of Chinese Yuan per Dollar over time…

China has been accused many times of currency manipulation, but it’s hard to argue with black and white figures.  clearly that straight line up represents a major arbitrary change in the exchanges rates in our two currencies.  It’s interesting that it happens just a few years before the manufacturing job crunch in the US.  Just long enough for businesses to be sure it would be a relatively permanent fixture they Could take advantage of.  It’s also interesting to see that now that continued pressure has forced the Chinese to back off a bit, that US Manufacturing jobs are starting to come back.  When you can’t buy nearly as many Chinese Yuan for a dollar, Chinese goods become a lot more expensive.  The Chinese are by no means done manipulating their currency–you can see a relatively recent shelf right after 2008 where they were propping it up, but it is definitely getting harder, and the more fairly valued their currency is, the more level the playing field.

Another factor that figures greatly into the competition for manufacturing jobs are energy prices: 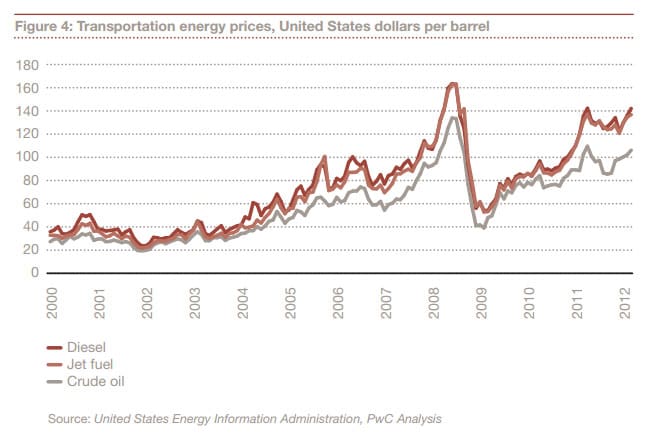 Energy got much cheaper at exactly the right time for offshoring…

Energy got much cheaper at exactly the right time for offshoring–about 2009.  If you’re manufacturing goods offshore to be sold here, transportation and energy costs have to be cheap.  The more expensive the are, the more important it will be to try to manufacture closer to wherever the goods will be sold.

Between the currency exchange rates and energy costs, China enjoyed a perfect storm to aid it in attracting manufacturing to its shores.  The more those two advantages erode, and the more Chinese wages rise, the harder it will be to justify offshoring.

I don’t want to make this article overly long by delving too much into relative worker productivity and a bunch of other factors that go into this Global Competition.  I think the point has been made that some very unusual circumstances create a mass manufacturing exodus and that as those circumstances are coming to a close, US Manufacturing will be better positioned than ever to compete.  The trend to personalizing products and highly custom products will also continue to drive opportunity.  Shops should focus on these trends and not on being the low cost provider for commodity products.  The latter markets squeeze every drop of profit out for the big money players like Apple.  Speaking of which, even Apple is having to deal with increasing amounts of pressure against them by the Chinese as they face various lawsuits and PR campaigns seeking to block or hurt their products in China.

Take advantage of the many misconceptions out there, such as Apple’s claim that there is no manufacturing talent in the US, to move ahead under the radar.  There is huge opportunity going forward for those who play it smart and can take advantage of the change in the winds.