This is a very ambitious modification that never made it out of the planning stages.  When looking at the amount of work involved plus realizing my ultimate goal was to CNC the lathe (which would mean discarding the tumbler gear system), I decided not to go forward.  Still, it was an interesting design exercise.

The Variable Speed DC Motor adds tremendous flexibility to the lathe, but most agree that the user will still be required to change speeds with the belts and pulleys. In addition, the Lathemaster 9×30, like most 9×20 lathes, lacks the ability to reverse the leadscrew, so it can’t cut lefthand threads nor can we use the leadscrew to feed left to right. The goal of this pair of modifications is to eliminate gear and pulley changes except for thread cutting once and for all.

To solve these problems I’m envisioning two levers that operate two different gearing mechanisms. The first lever operates a Tumbler Reverse of the kind often fabricated for these lathes. The second lever provides Hi-Low Gears, which basically offer a high-low speed range. In the lower range, we’d find the gearing reduces speeds by a factor of 4.7:1 or so. My plan is to employ the ingenious geometry of the Tumbler Reverse to also implement a Tumbler Back Gear.

For a good pictorial description of how a tumbler mechanism words, see Steve Bedair’s site. 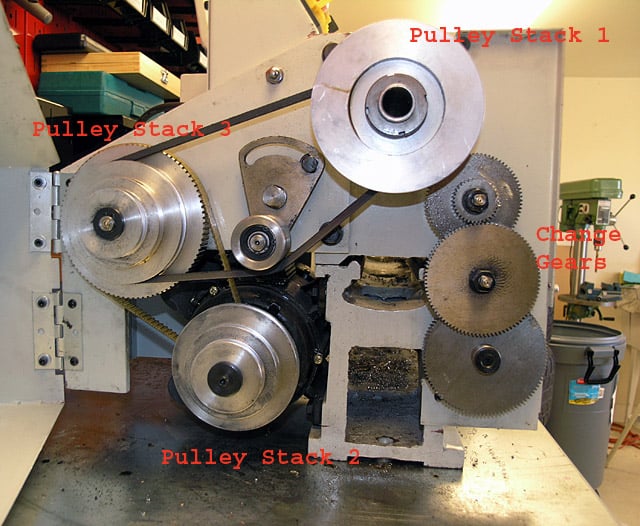 Pulley Stack 2: This stack is on the motor

Pulley Stack 3: These are the “Low Gears”

The range of speeds available by default is:

The low gears are provided by the toothed timing belt that seems to have a range of about 4.76:1.

We can see the different pulleys in the stacks in this photograph: 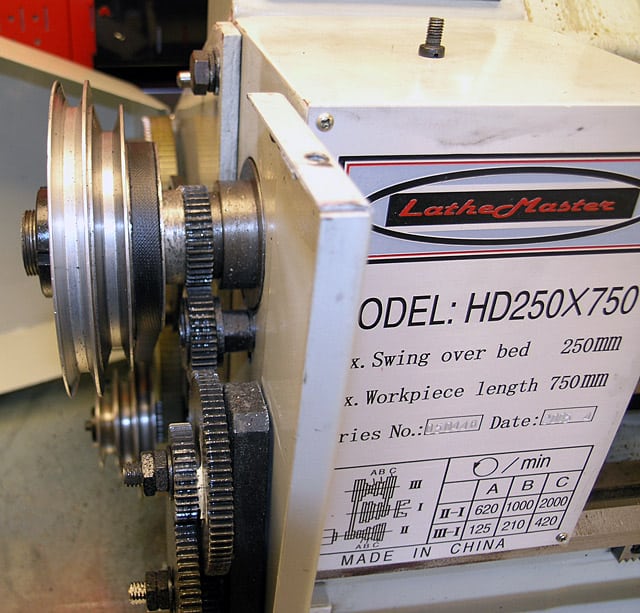 Speeds on pulleys are low, medium, and high, left to right

Okay, now let’s look at how we reverse the leadscrew in the normal factory-approved manner. Consider the following diagram: 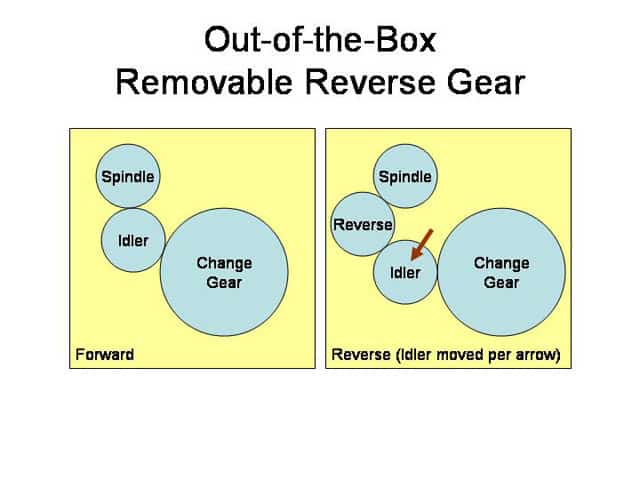 The factory would have use remove the Idler gear to a new location below and slightly to the left (direction of red arrow), and install a reversing gear next to it whenever we want to reverse. It makes it possible to reverse, but it sure ain’t easy! Note that the gear on the spindle, the Reversing Gear, and the Idler Gear are all the same size, about 42mm in diameter. This is to ensure that the gear train runs at the same speed regardless of which direction we’re running it in.

Below, we’ll take a look at possible ways of adding a tumbler reverse to this geartrain.

I’m envisioning two tumbler mechanisms. The first would be a fairly standard tumbler reverse, done just as one commonly sees it on any 9×20 lathe. The second would tumble between taking power from Stack 2 (the direct drive motor stack) and Stack 3 (the low gear stack). Our new Variable Speed DC Motor has a maximum speed of 4500 rpm. Using the aforementioned tumbler mechanism with the same ratios already on the lathe, and the assumption we will turn our motor no more slowly than 120 rpm, we should be able to deliver the following speed ranges:

I’m assuming the extra tumbler gears and pulleys will be a straight 1:1 ratio to the spindle. The modification would involve removing the pulley stacks from the motor and “low gear” area, leaving the timing belt intact, and replacing said stacks with gears that interact with 2 gears on the tumbler plate. Because we use 2 gears, we keep the same direction of rotation. One gear tumbles between the 2 stack spindles, and the other sits at the pivot with a single pulley on it taking belt motion back to the lathe spindle. I’m guessing I can cannibalize the middle (direct drive) pulley from one of the two stacks and drive the lathe spindle belt with that.

This represents quite an improvement over the stock lathe speed ranges. We have extended the high end by 2000 rpm and lowered the bottom end from 125 to just 25 rpm. Any slower and we would do just as well to hand crank the spindle (the subject for another modification I’m sure!). Here is what the geometry for the Hi-Low Tumbler might look like: 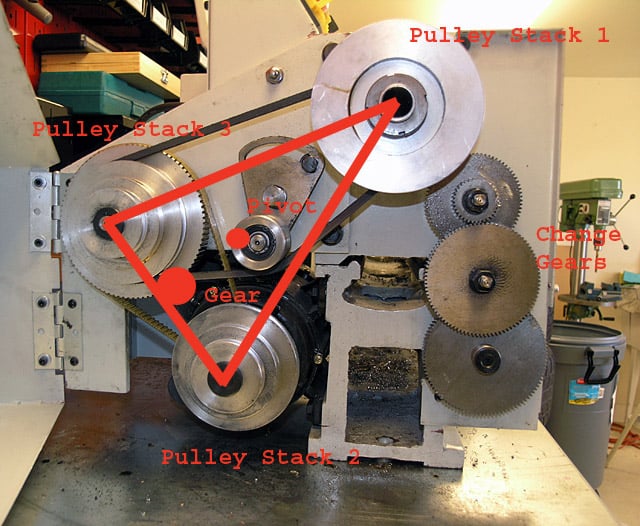 The Hi-Low Tumbler Geometry is the classic triangular planform. A gear takes power off either Stack 2 (Direct Motor Drive) or Stack 3 (Low Gears). It is pivoted in the vicinity of the current idler mechanism. I am envisioning this gear turning a second gear at the pivot that has a pulley on it that will mesh perfectly with the middle (direct drive) pulley on the spindle. Since it is located at the pivot point, belt tension remains a constant. We’ll need to create a mechanism for releasing the tension so the belt can be changed. This could be achieved with an arrangement similar to the current idler, which would likely have to be relocated. A Hi-Low shift lever would extend straight upward from the pivot. Push the lever forward to get “Hi Gear” and pull back for “Low Gear”. Sounds intuitive enough, eh?

Now let’s look at the potential for a Tumbler Reverse mechanism. Having seen from the diagram above how things work, Lathemaster provides with a harder challenge than the normal 9×20 lathes in fabricating such a mechanism. Typically, we can pivot around an idler gear and bring our tumbler into play. In this case, the threading gear train has no such idler gear, as all the gears are in a vertical row. Instead, we may be able to pivot around the spindle, as follows: 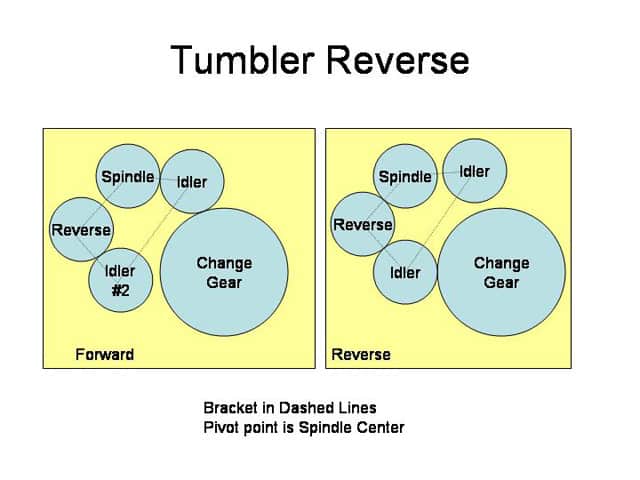 Pivoting a Tumbler Reverse Around the Spindle

We could probably also have pivoted around the Change Gear, but is is moveable, and so that would not be a satisfactory solution. In fact, we can pivot at any point along a line drawn so that it intersects Spindle and Change Gear centers as long as we’re far enough from the gap between the two gears to provide a gentle enough engaging arc. We could also design this system as a sliding “linear” engagement where the two gear sets move on a line instead of a pivoting arc, so we should think about what makes the most sense. It might also work to pivot on that line slightly above and to left of the spindle too, and use a fork-shaped plate that goes around the spindle and holds our gears.

As for the gears, what’s needed is to introduce 2 new gears. In the “Forward” mode, we essentially swap our original Idler from below the line between Spindle and Change Gear to above, in mirror fashion. In “Reverse”, we swing the “Forward” Idler up out of the way and bring the normal Factory Reversed Idler geometry up from below. Tricky, eh? In order to accomplish this magic, we shall need to order a spare “Reverse” Idler from Lathemaster, fabricate a plate to mount all these gears to, and make sure we can attach that plate so that it pivots around the spindle. No mean feat!

While I’m at this, I plan to install a sensor assembly to provide spindle tachometer readings to the Shumatech DRO. It will be essential to be able to determine the exact spindle speed (no longer a function of gears and pulleys!) in order to ensure accurate thread cutting. Judging from the picture above, there should be plenty of room to affix some sort of optical or magnetic sensor.

4 Identical Gears: 1 for each pulley stack, 2 for tumbler plate