What’s the best way to get the cutter to depth when beginning a pocket?

Leaving aside the possibility of pre-drilling a hole or other strategies that could involve a tool change, the pecking order is pretty straightforward.  Helical Interpolation creates the least wear on the tooling, followed by ramping, and plunging is by far the least kind way of entering a cut for your tools.  I’ve seen this confirmed over and over again by a variety of sources, but I was prompted to pen this quick post while reading some guidelines for HSM by Robbjack.

If you’re not familiar with these methods, helical interpolation involves producing a circular hole by having the endmill describe a helical motion.  Ramping means moving the cutter in a straight line while gradually increasing depth.

Why is plunging so tough on tools?

There’s a bunch of reasons.  You can plunge with an endmill, but it is hard on it, chip evacuation is harder, you need a center cutting endmill and so on.  The feedrate when plunging is typically a fraction of the normal straightline feedrate.  A good rule of thumb is to divide the normal feedrate if slotting to the same depth by the number of flutes.  So, a 2 flute cutter could plunge at 1/2 it’s slotting feedrate.

When people contact me about problems cutting tough materials like stainless steel, one of the first questions I ask is how the cutter entered the cut.  Often, the wrong kind of entry is microscopically chipping the tool.  That chip is dull and soon causes the tool to break as it grows during the cut.

Let’s assume we’ve decided to use helical interpolation.  What should our feedrate be and what should the helix ramp angle be?

We can use the G-Wizard CNC Calculator to figure it out: 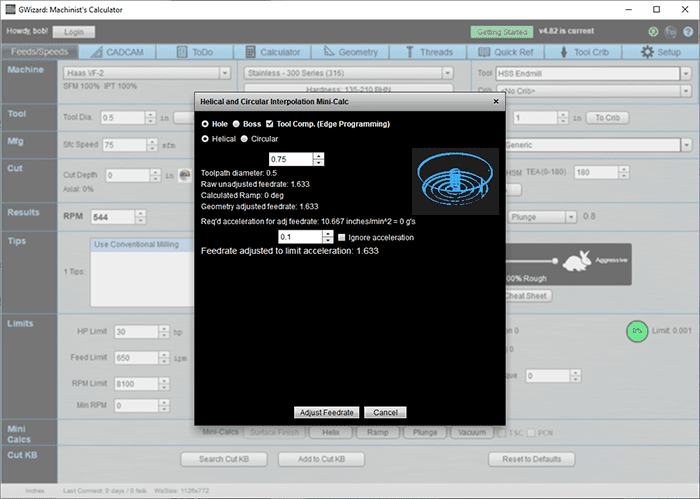 Start out figuring feeds and speeds for slotting.  Say we have a 1/2″ carbide endmill and we’re cutting 6061 aluminum.  Set it with a full 1/2″ width of cut and let’s be a little conservative on depth of cut–we’ll use 1/4″.  Now press the “Interpolate” button to bring up the Interpolation Mini-Calculator.  Let’s say we’re going to make a 2″ hole.  G-Wizard tells us the ramp angle is 6.1 degrees and our adjusted feedrate should be 31 inches per minute, which is a little slower than the 43 IPM a straight slot calls for.

The helix angle is based on the idea that the endmill will achieve the depth of cut specified in one rotation.  So, if we need to helix down 1″, and we specified a 1/4″ DOC as we did for this example, it will take 4 rotations at these feeds and speeds to get to the bottom of the hole.

There are some things to be wary of.  First, evacuating chips down in a hole is hard.  The closer the hole to the endmill’s diameter and the deeper it is, the harder it becomes.  A high pressure through spindle air blast is favored for deep helical interpolation for that reason.  It’s really hard to get a flood coolant nozzle pointed right to blast the chips up out of the hole as the interpolation is happening.  So, don’t be stingy on the hole diameter, and don’t be afraid to reduce the depth of cut per rotation (e.g. the ramp angle) on tougher situations.

Ramping Along the Cut

If helical interpolation doesn’t work out, the next best alternative is to ramp along the cut.  There are several variations on ramping.

For example, Fusion 360, Mastercam and many other CAM programs have an option for the ramp to follow the contour of the pocket (of course that may not be a straight line, but we’ll refer to it as ramping).  Another style has the cutter going back and forth in the straight line getting a little deeper each pass until it gets to full depth.  This style is often called zig zag.

LIke Helical Interpolation, it’s important to adjust your Feeds and Speeds for the ramped cut.  You can’t just cruise on in as if you are making a normal cut.  G-Wizard has a ramp angle feedrate calculator especially for the purpose: 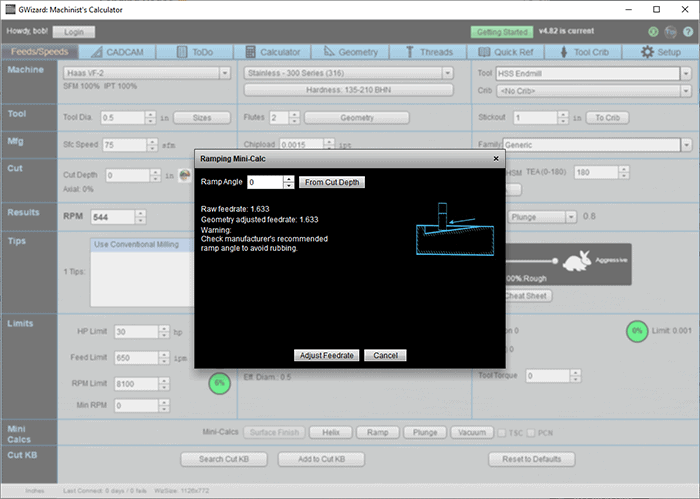 Speaking of ramp angle, different tooling, and especially indexable tooling, will have limitations on the maximum ramp angle the tool’s geometry can accomodate.  If the tool can plunge a hole, there won’t be such a limitation.  A 4 flute non-centercutting endmill will have a limit as will an indexable tool.  If using such tools, be sure to look up the manufacturer’s recommendations.

A lot of machinists are pretty conservative on their ramp angle.  I see recommendations like 1.5 degrees or 2.5 degrees all the time.  You can go faster than you’d think.  OSG talks about 10 to 20 degrees in tough materials for some of their endmills.  Granted, those are premium endmills, but don’t be afraid to be a little more aggressive.