CNC Control Market Shares: What Are the Most Popular Controls? 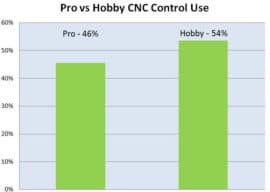 As of this morning, we have 200 responses to our CNC Control Survey.  While we’re picking up some new controls here and there, the percentages haven’t materially changed much from the first 100 responses, so it is time to summarize the results.

The hobby controls narrowly edged out professional controls by a margin of 8%: 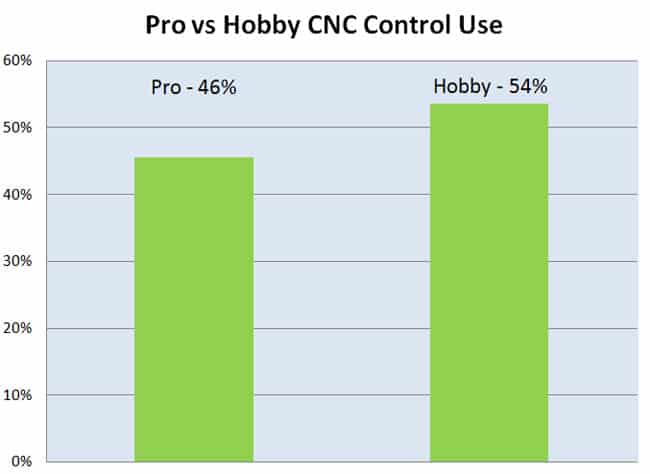 First up is a breakdown between the two big gorillas, Mach3 and LinuxCNC, versus everything else: 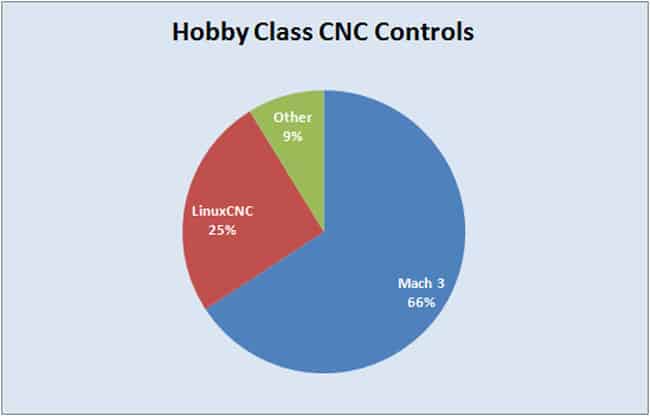 I suspect most Mach3 users wouldn’t have guessed LinuxCNC was as big as it is.  I know I was surprised.  I wish I had data over time in order to understand whether it was always this big or whether it has been steadily gaining share at Mach3’s expense.  The group labeled “Other” is also larger than I would’ve expected, and I believe it reflects a crop of relatively new software that’s been hitting the market.  Here is how “Other” breaks down: 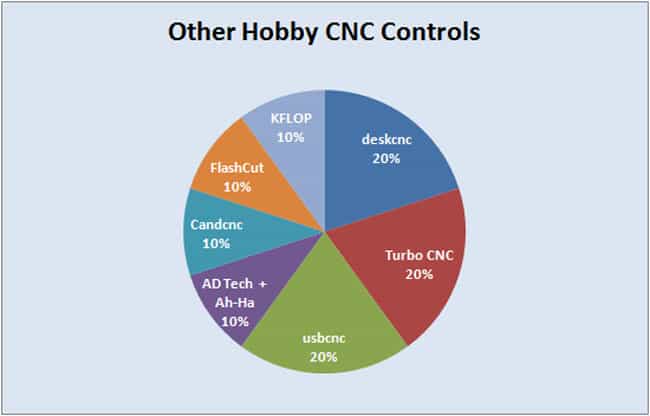 This market is still very fragmented, with some old controls and some new.  Turbo CNC still runs on DOS, for example, while products like KFLOP are extremely modern and are full motion control solutions.  It will be interesting to watch the evolution of these sorts of products.

For those with an entrepreneurial bent, a very typical thing to do would be to take Mach3’s 66% share plus the sometimes quoted figures that Mach3 has sold 60-80,000 paid copies and assume the overall market today for Hobby controls is therefore 80,000 / 66% which is about 120,000 units.  Realistically, its probably much larger because not everyone who uses these controls will be one who frequently participates in Internet surveys on sites like CNCCookbook.  For comparison, CNCZone says they have 220,000 registered members.  That’s probably a closer number, but still small.  In addition, most of the “Maker 3D Printer” world seems to be off on its own and they are CNC’ers too.  But, we could say that in our wildest dreams, the total addressable hobby marketplace is perhaps 500,000 strong today.  I would imagine we’ll see that grow steadily over time as it gets easier to do, more popular, less expensive, and more common so more people are exposed to it.

This is a good time to mention that while I have arbitrarily broken these controls down into categories like “Hobby” and “Pro”, they are arbitrary and no doubt some of the makers of the software will object to being categorized as “Hobby” class controls.  Really all it means as that these controls are considerably less expensive.  I know for a fact that there are OEM’s selling pro-grade machinery that runs software like Mach3.  Tormach is one great example.  There are no doubt many Tormachs laboring daily to produce parts for a fee, a very professional undertaking indeed.

Moving over to the Pro category, we see the following breakdown: 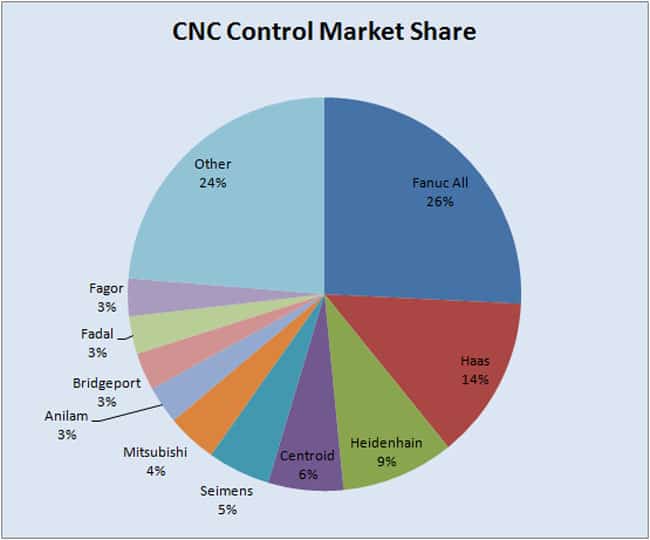 As one would expect, mighty Fanuc has the largest share at 26%, but it is by no means as commanding as Mach3’s share is over in the Hobby market.  Haas also has very large share which is all the more impressive when you consider that they only install them on Haas machines.  That makes it a reflection on just how many machines they’re selling relative to other makes.  Numbers 3, 4, and 5 are Heidenhain, Centroid, and Seimens, respectively, which reflects well on the German and CNC Retrofit markets.

As befits an old and well-established market, there is a long tail of various controls categorized in the “Other” category that make up a market almost as large as Fanuc.  Here are the players there: 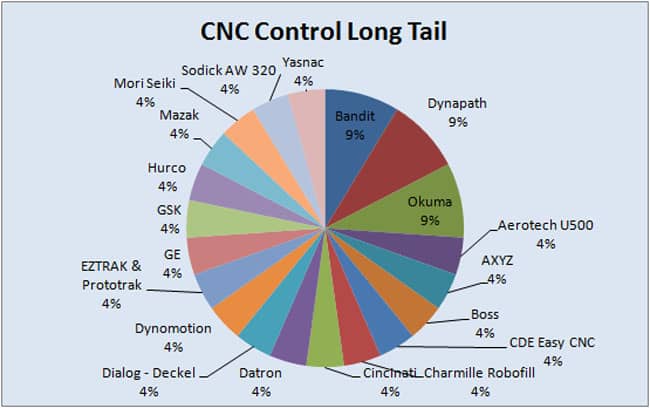 While Bandit, Dynapath, and Okuma have a slight advantage, it’s pretty much a free-for-all among the rest of the players.

We’ll let the survey continue to run so we can gather data on which canned post profiles we need to create for G-Wizard G-Code Editor before we ship version 1.0.  If you use GWE, please vote so we can be sure you’re covered.  If you don’t, what are you waiting for?  It’s free in Beta test and does a whole bunch of neat stuff.  Sign up today!