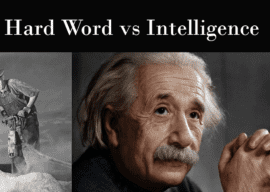 People are curious whether hard work can beat intelligence?  A similar question is “Can hustling harder make up for a lack of native talent?”

The reason to wonder is obvious–we can hustle harder, but it is hard to manufacture more talent.

There’s really 3 things we should be considering, not 2:

By Wisdom, I mean already knowing the answers to most of the questions. The hierarchy looks like this in terms of success likelihood:

Think of it this way:

I’m a big believer that wisdom trumps all, even though most people who know me think I’m very smart and very hard-working.

But I’m not the only one.

Malcolm Gladwell has a great book called “Outliers” that focuses on the “10,000 hour rule.”  Gladwell claims that the key to achieving world-class expertise in any skill, is, to a large extent, a matter of practicing the correct way, for a total of around 10,000 hours.  What you’re learning with all that practice is what I’m calling “wisdom” in this piece.

Since that time, various others have argued that the 10,000 rule only applies to fields that are stable enough that practice matters.  If the whole field changes in less than 10,000 hours, you’re out of luck.

You can still have more experience / wisdom than anyone else pursuing the rapidly changing field.  In addition, you may have meta-wisdom.  That would be wisdom about how to approach anything in life for the first time, before you (or perhaps anyone else) has a chance to amass 10,000 hours.

Read the rest of the article over on my Entrepreneur’s Blog to learn some great techniques to help grow and harness your wisdom and succeed.

[ 3 Techniques to Put Hard Work and Wisdom in Your Corner ]

The image at the top says, “Hard Word vs Intelligence.”  It’s a mistake on my part, and one easily corrected.  But I’ll leave it up as a reminder of what happens when your Hustle gets ahead of both your Wisdom and Intelligence!