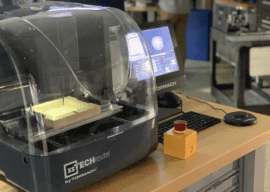 Tormach has been on a hot product cycle lately, and we’re still not done hearing about their new offerings.

The M and MX series machines represent a step up in performance from their traditional lineup.  More on the MX in a moment, but first I want to talk a bit about the new CNC Routers.

Yes, that’s right, Tormach has had entries in the CNC Mill, CNC Lathe, Automated Surface Grinder, and Automated Bandsaw worlds, and now they’ve got 2 new CNC Routers.  They’re launching these machines as we speak at Fabtech in Chicago.  I talked to Andy Grevstad at Tormach to learn about the new Router offerings. 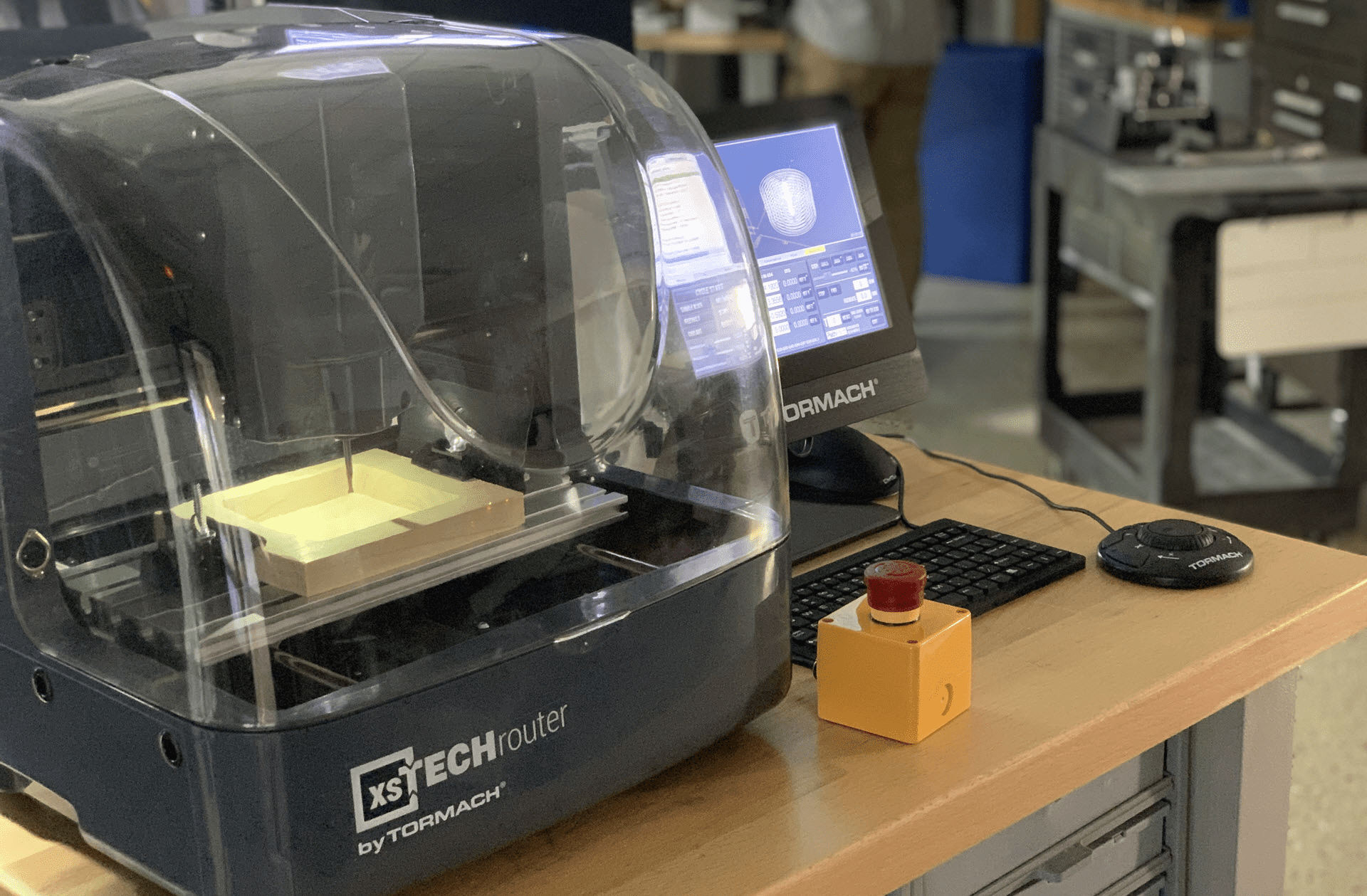 Tormach is keenly interested in the CNC and Machining Education Market, and the XSTech desktop router is tailor made for it.  Tormach has been working closely with a number of educational partners to engineer machines that meet the specific needs of Education.  The initial run of the $3495 XSTech sold out before they even had a chance to publicize it much as a result.

“Teachers have been asking us for a more approachable machine for education for a long time,” said Grevstad.  He went on to say that educators don’t want dumbed down software at all.  Offerings with super-simple front ends but limited capable have been out there for a while, but haven’t taken off with education.  Instead, Grevstad told me educators are looking for:

Tormach has partnered with NC3, a national teaching standard, to get teachers the training they need for the XSTech and curriculum.  Tormach is also developing some of its own training to get kids fired up about learning.

These machines have an all-new electronics package that incorporates a touch screen and their PathPilot software.  Being able to run the same control software across a variety of machines is another key to success in education.

If you happen to be at Fabtech, drop your business card off at the Tormach booth.  They’re giving away a free XSTech to some lucky recipient.  Andy told me they’d send one CNCCookbook’s way as well for review, so I look forward to checking it out.

For more details on the XSTech, here’s the link to Tormach’s page. 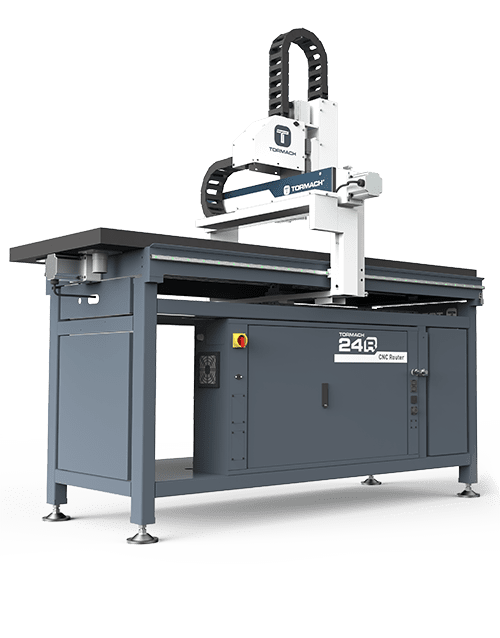 Cool as the XSTech router is, the 24R is the kind of machine that catches my eye.  It’s a robust 2′ x 4′ work envelope machine with 2HP 24,000 rpm liquid cooled spindle.  The table is set up for vacuum, just added the pump, which is included on their high-end package.  They’re even bundling in Vectric CADCAM software to make sure you’ve got everything you need. 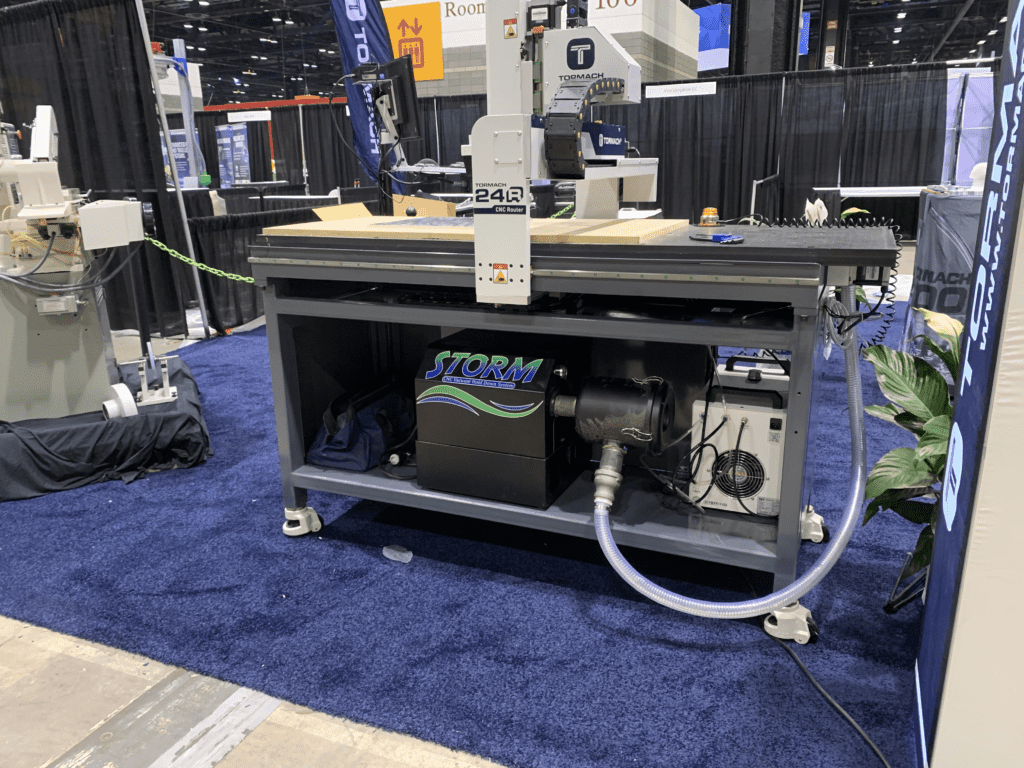 Here’s the machine being set up for demo at Fabtech (up to the minute pic!).  Catch the Storm vacuum pump.  Vacuum Tables are awesome for CNC Routers.

The 2′ x 4′ work envelope has a lot going for it.  It’s the perfect size for making guitars, for example (something I really want to do with a CNC Router).  It will also go through a normal width door without needing to be disassembled. 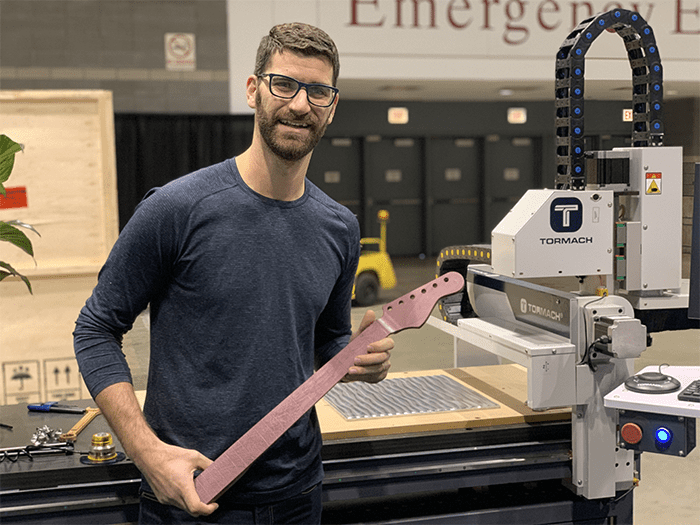 2′ x 4′ is the perfect size for making guitars…

This machine weighs in at a beefy 900lbs, and uses linear rails.  And, it’ll cut aluminum well, making it a great choice for robotics teams and the like.  Check this cool 3D surfacing project: 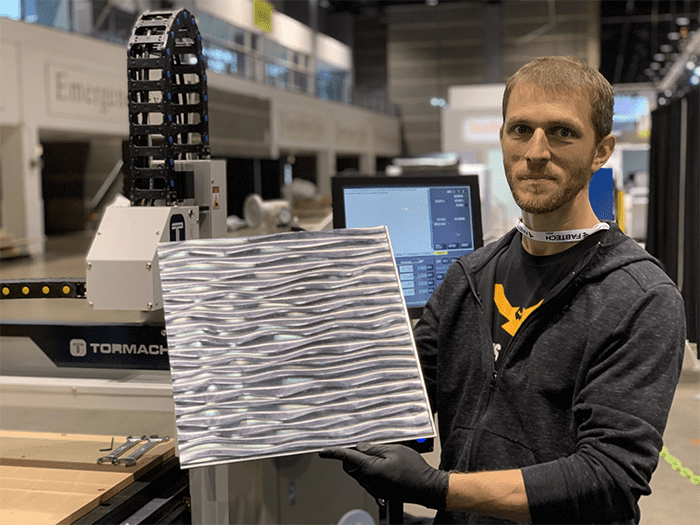 The machine comes completely assembled.  There will be a toolchanger down the road as well.  24R packages start at $13995 and go up from there.

Here’s the 24R page on the Tormach site for more details.

I’d love to see a 24R in CNCCookbook’s shop.  A CNC Router with a decent-sized work envelope is a really awesome thing to have around.  In fact, I’m torn about whether I’d rather have the 24R or an 1100MX as our next Tormach at CNCCookbook.

I’ve read about the 1100MX with great interest, and finally got to see one just the other day at our local Tormach dealer–Santa Cruz Electronics.  John Bower runs SCE and he’s a great guy to deal with.  He stocks an amazing number of Tormach replacement parts, accessories, and tooling, so if you have a Tormach and you’re in Northern California, you really should look him up.

John also has almost all the Tormach machines (no router yet!), and recently added an 1100MX to the showroom floor.  These aren’t Garage Queens either.  John has a shop in the backroom and uses all the machines to make a range of things.  He even makes some really cool Tormach accessories such as his tooling racks that attach to their enclosures.  I have one on my machine, and most of the Tormachs he sells the customers specify one.  You can see my write-up on the racks here. 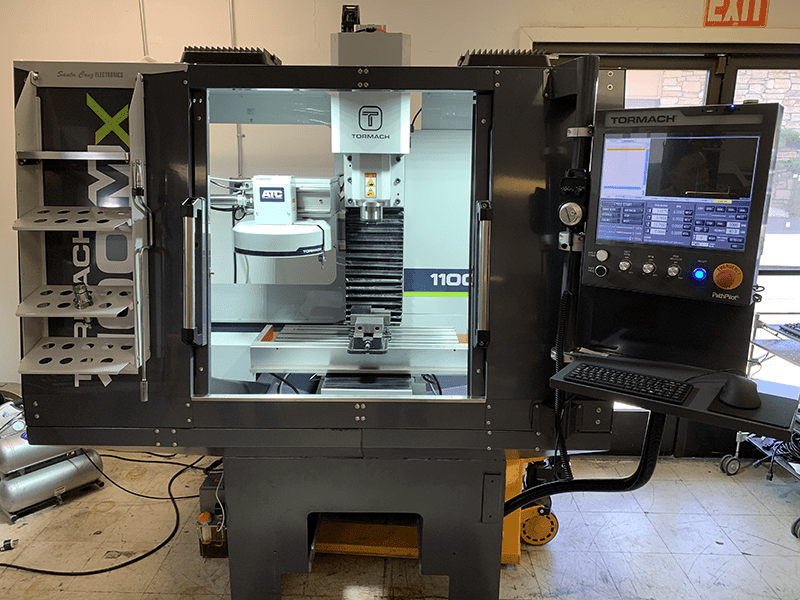 SCE’s 1100MX also came with Tormach’s Operator’s Console, which can be added to pretty much any of their mills: 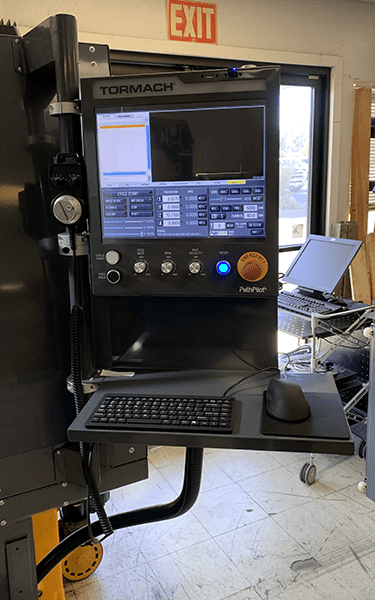 The Operator’s Console is slick.  It uses their single board touch-screen PC.  The mounting onto the machine is beefier than the standard swing-arm.  But the real icing on the cake are the knobs and the job shuttle with MPG.  At least we get the feel of the “Big Boy” CNC Machines!  It’s really nice to be able to dial down the feedrates and rapids with an actual knob when you’re proofing a program for the first time (although I tend to prefer to run a simulator to “cutting air” for my own work).

The chip handling in the newer M and MX Tormachs is far superior to the older machines.  I’d love to upgrade for this reason alone.  So much easier on my back than trying to fish the chips out with my ShopVac, LOL! 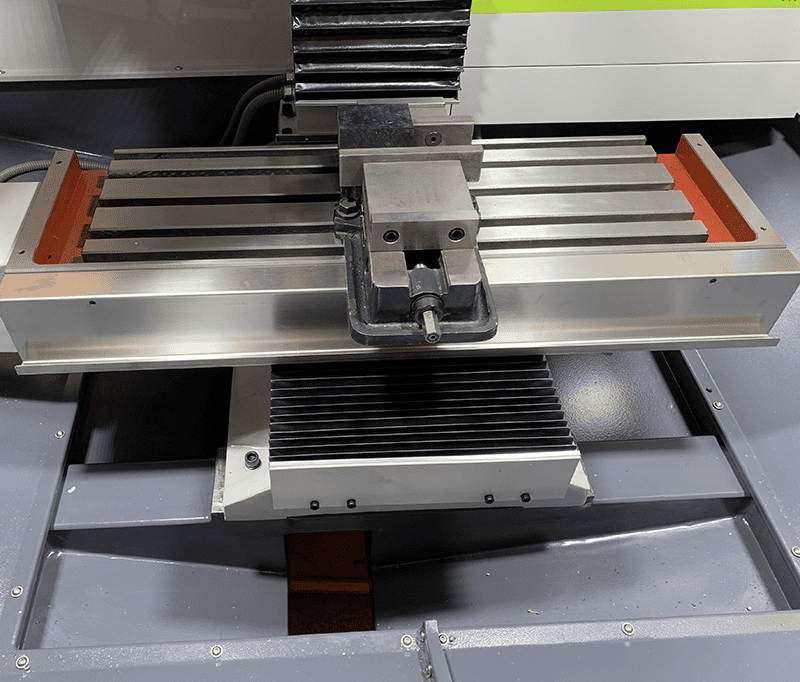 I want to show off SCE’s latest racks for the BT30 tooling on the MX: 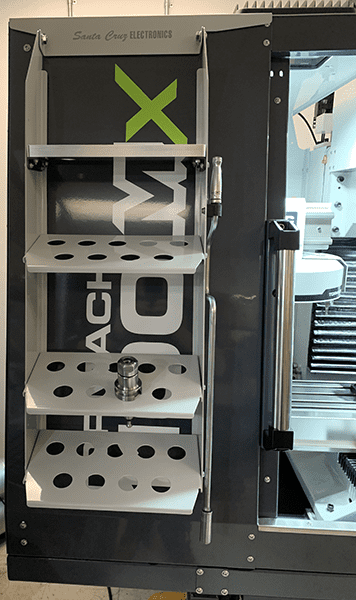 Here’s a special option for the racks: 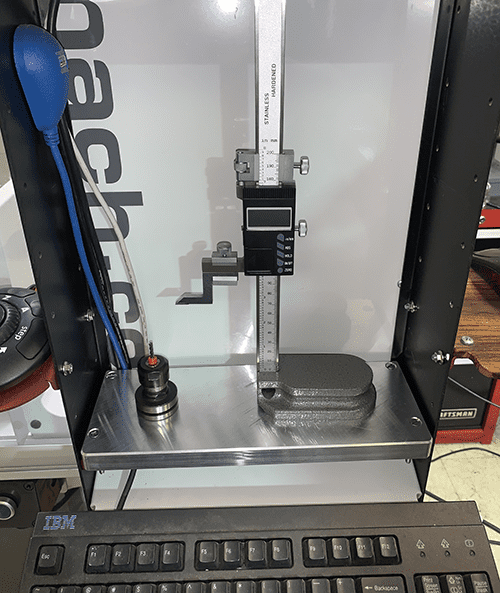 It’s really slick, and made of MIC-6.

A couple of thoughts on the BT30 toolholders of the MX.  First, they’re a big step up from TTS.  Nothing wrong with TTS, but these BT30 holders are beefier, more rigid, and there’s no possibility of pullout of the taper at all with the locking pull stud design.  That means you can get all the horsepower into the cut with a lot less trouble.

But there’s one thing I learned from John that I thought was interesting.  The actual reference on a BT30 is not the flat part of the ATC collar.  It’s the top of the taper.  The collar can be +/- something like 15 thousandths from that gage line, so if you’re trying to set tool lengths from the collar, you’re going to have problems.

SCE’s integrated tool height measuring station can be machined for either TTS or BT30, and the BT30 designs takes that taper issue into account.  A lot of the BT30 tightening fixtures do not.

I love my SCE Tooling Racks.  They make it so easy to organize the toolholders.  Get in touch with SCE it you’d like some for your machine–here’s the link.  Just give owner John Bower a call.  He’s knowledgeable and fun to talk to.

BTW, I’ve been trying to talk Tormach into flying down with the new routers and doing a joint open house at Santa Cruz Electronics so folks in Northern California can see the new machines and the whole Tormach line up personally.  Let them know by calling, email, or commenting here if you’d like to attend such an event.  I would definitely be there too.

Lots going on in Tormach land, and probably still more in the back rooms of Wisconsin.  I suspect these new machines will also get the competitive juices flowing out in the market from other vendors.  Competition is always a good thing for us end users–we get better deals and more performance as a result.

Can’t wait to see what else develops!