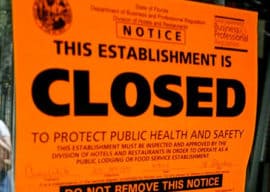 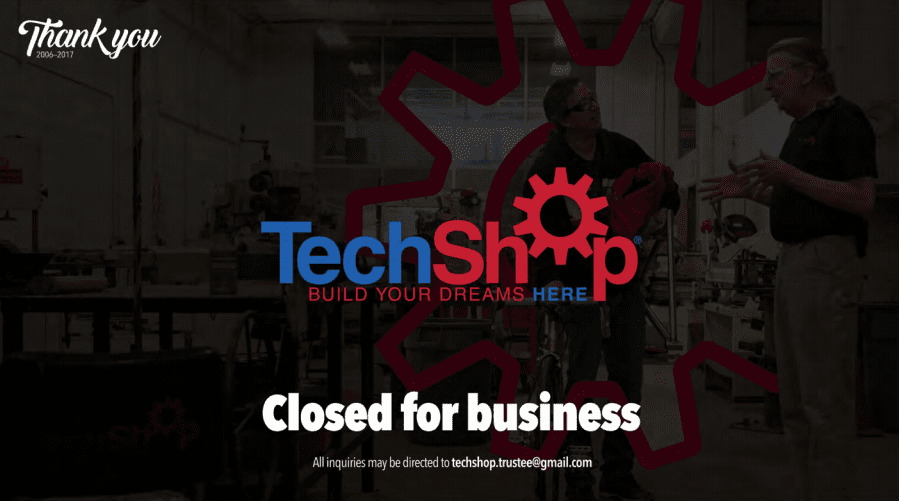 Sad news, indeed.  The TechShop has closed and declared bankruptcy.  They were in business from 2006 to 2017, 11 years of history helping Makers and other folks.  Many of them had CNC equipment as well, often Tormachs or CNC Routers.

There’s a nice brochure that goes over the company history on their web site.  No idea how long it will stay up.

The company is going for straight Chapter 7 bankruptcy.  Unlike the Chapter 11, which allows a company to restructure and come back, there’s no coming back from Chapter 7.

They say they didn’t go for Chapter 11 because they couldn’t raise new capital for their new business model and didn’t want to downsize or ask contributors to keep working for low or no wages.

I’ve seen a Chapter 7 liquidation of a Silicon Valley company, and it’s not pretty.  A court appointed trustee will be placed in control.  That trustee typically has no knowledge or interest in the business, employees, or customers.  Their job is just to wind it up and sell any remaining valuable assets for pennies on the dollar.

Anything they get pays the lawyers first and the banks second.  They almost never get enough for anyone else to see anything.

What does it mean for Maker spaces?

It may not mean anything.  Look, it’s hard for me to believe a Maker space can’t be a profitable entity.  Some TechShops evidently were profitable, but the majority were not.  Management clearly had designs on doing some things other than running Maker spaces for the benefit of members.  That’s what replacing the CEO and all that talk of “pivoting” is about.

It could simply be that all turned out to be a costly distraction from the meat and potatoes business of running a Maker space.

I think about a Maker space like a Health Club, just a whole lot more fun.  CNCBC says Health Club dues are an average of $40 to $50 a month, but they often include a one-time initiation fee that jacks that up to $800 a year.

TechShop claims they had 9000+ active members.  That’s an annual revenue of $5.4 million a year spread over 10 locations or $540,000 per location if they’re all equal.  And that would be an average of 900 members per TechShop.

For comparison, the average Health Club in the US has $755,000 in annual revenue and about 1568 members per club.

So here’s the question–could you run a Maker space for $540,000 a year profitably?

Below is their full letter announcing the closure:

It is with a very sad heart and deep disappointment that I announce that TechShop is shutting down its operations effective November 15 and will file for bankruptcy under Chapter-7. In spite of many months of effort to restructure the company’s debt and raise new capital to fund our recently announced strategic pivot, we have depleted our funds. We are left with no other options.

We are closing all of our ten U.S. locations and small corporate group effective 8AM November 15. The TechShop Global locations will not be affected as they are all owned by overseas licensees. We will announce dates and times for members to come in and remove their personal materials and projects as soon as we can coordinate with the bankruptcy Trustee.

I’m not going to spin this. We’ve been operating on exceedingly low cash balances for quite some time now. Until recently, this meant late payment to instructors and vendors, which none of us liked, but at least we were able to pay everyone, albeit several weeks late, and keep the doors open. As I shared with many of you directly, I wasn’t happy operating that way. We were trying to do whatever we could to keep the doors open and remain operational so that we could see the light of the next day and hopefully close on a couple of large licensing deals we had been working on. However, this cannot go on any longer. The current cash conditions — and the toll they are taking on employees, instructors, and members — are entirely unacceptable.

Over the past week we have worked tirelessly to explore options for filing Chapter-11 bankruptcy. This alternative would have allowed us to reorganize and restructure our debt. To file Chapter-11, however, we would need cash to pay an even further reduced workforce, instructors, rent, utilities, insurance, and the like. That is money that we simply do not have. I can no longer ask instructors, employees, and contractors to work when we do not have adequate cash reserves to pay them. Most regrettably, the only viable path forward is filing Chapter-7.

As dark a moment as this is, I also want to acknowledge the enormous impact TechShop has had on our members and their communities over the past ten years.

I first met our Founder, Jim Newton, when I was at Make: Magazine. We were setting up for our very first Maker Faire in 2006. From his small maker table, Jim spent that entire weekend sharing his vision for an open access community makerspace where anyone could build their dreams. By the end of that year Jim opened the very first TechShop location in Menlo Park. It was a scrappy space filled with used equipment and wildly creative makers. It quickly leveraged the ideas, operational know-how, people, and community to bring TechShop to other cities.

The essence of the TechShop vision was to develop a network of makerspaces, members, curriculum, standards, instructors, and learning that would fuel the birth of new technologies, products, jobs, and companies. TechShop has accomplished much of this vision.

We have inspired thousands of youth to view themselves as inventors, problem solvers, creators, and makers. As a veteran myself, I’m proud to say that TechShop also provided membership and training to over three thousand returning veterans. This program enabled veterans to develop skills and experience — preparing them for jobs in advanced manufacturing and helping dozens of vets to launch their own companies.

TechShop employees, investors, and Jim, can hold their heads high in the knowledge that their vision, perseverance, and hard work produces great results. Together, the TechShop community inspired and transformed tens of thousands of people and dozens of neighborhoods; led directly to the creation of thousands of new jobs; and helped generate billions in net worth and new technologies — some of them life-saving.

As we examine our success, we must also examine our failures. A for-profit network of wholly owned makerspaces is impossible to sustain without outside subsidy from cities, companies, and foundations, often in the form of memberships, training grants, and sponsored programs. This kind of funding is readily available to non-profits, and very rarely an option for for-profit enterprises. This is why we announced a pivot — to leverage our know-how, experience, systems, and processes. The goal of TechShop 2.0 was to help non-profits, corporations, and universities launch and operate their own makerspaces. We would get out of the business of owning makerspaces and instead focus on enabling other entities to build and operate makerspaces.

In hindsight, we invested too many years and too many dollars trying to prop up the wrong business model. What we accomplished over the past ten years, however, has been nothing less than monumental. I encourage our members, employees, partners, and the entire maker community to take something constructive from TechShop’s experience: the world needs makerspaces.

Jim Newton, TechShop employees, members, and investors will go forward with their experience. Many will find a way to collaborate and work together again. The world will be a far better place for TechShop’s experience.

I do not mean to trivialize the impact our closure will have on employees, members, or our faithful investors and lenders. If I can ever find a way to reward your loyalty, hard work and commitment to TechShop, I will.