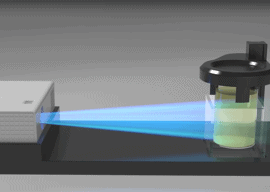 Just when we thought the hype was fading on 3D Printing a new development comes along.  That’s what technology is all about–don’t get complacent with the way things are at any point in time!

In Switzerland, at the Ecole polytechnique fédérale de Lausanne (EPFL), a new 3D Printing Technology is being developed.  It’s based on medical imaging techniques called “Tomography“, and it allows unprecedented speed of 3D printing at high accuracy.  The video below shows it in action:

Note how the part is being spun as it is being created.  For larger objects, or in cases where the printed part cannot be spun, presumably the lasers generating the part will spin around the part.

The EPFL process uses a photosensitive resin like many 3D printers do today (such as the popular FormLabs machines).  Traditionally, 3D SLA machines have built up 3D printed parts a layer at a time, which can be quite time consuming.  The last big breakthrough was by Carbon3D, which pioneered a method allowing a 10x speedup.  EPFL’s technology is many times faster still, so it could be quite a revolution.

A new company, Readily3D, has been formed to commercialize the technology, which they’re calling “Volumetric 3D Printing”.  Another advantage of the technology is no struts or supports are required, which means less post processing.

So far it’s a science experiment, and no commercial Volumetric 3D Printers are available.  It’s limited to fairly small parts in the current prototypes, about 2 cm.  Accuracy is 80 micrometers, which is about the diameter of a strand of hair.  However, they expect to be able to deliver 15 cm parts soon.

So how does it work?  You’ll see an animation in the video above, but think of it this way:

As the cylinder of light-sensitive resin rotates, they project a motion picture of the part taken from the exact angle continuously onto the cylinder.  This causes the light to solidy the resin in exactly the right places and to build up solid resin in such a way that the part literally materializes in place.

One wonders what sort of limitations this method has over other methods?

Some questions I’d have:

Can’t wait to see this technology unfold into real products.