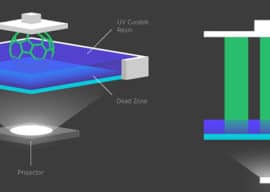 I’ve said it before, having access to good chemistry is an imperative for innovation in the 3D Printing space.  This new process from Carbon3D really emphasizes that point.  It’s designed for 3D printers that rely on photo-sensitive resins (SLA or Stereolithography) rather than filament extrusion, but it can make those printers dramatically faster as well as yielding a better and more consistent surface finish.  Here’s the scoop on how it works:

Traditional SLA printers operate by exposing the liquid resin, layer by layer, to a laser that scans out an image of the layer or an entire image projected by a DLP projector.  The light causes the photo-sensitive resin to harden.  Now comes the tricky part–the tray holding the resin has to mechanically rock, pivot, or twist to break the layer lose so that the part can be raised up and another layer printed.  This “peel” process is slow and it can stress or damage the part as well as all that jerking around can reduce the finish quality.  Supposedly, this peel process is also the thing that slows down these printers most–it’s not at all uncommon for them to take 8-12 hours to do a reasonably large part.

Along comes Carbon3D with an idea to minimize the impact of the “peel” process by taking the mechanical aspect out of it.  What they discovered is that oxygen prevents the light from hardening the resin.  So they create a sort of invisible bottom stage of super-oxygenated resin and the bottom of the part layer sits on top of that layer rather than on a solid resin tray.  Hence no “peel” process is needed–the bottom layer is attached to nothing but liquid resin.  It can be lifted so the next layer is ready with no force or stress being placed on the model.  Here it is diagrammatically:

The dark blue is regular photo-sensitive resin.  The aqua blue bottom layer is oxygenated and so will not harden.  Hence no “peel” process is necessary…

Carbon3D calls their new process CLIP, which stands for “Continuous Liquid Interface Production.”  The timing results are quite impressive:

CLIP ranges from 25 to 100X faster than existing methods.  As we talked about in conjunction with HP’s 3D Printing announcement, speed matters, and if these figures hold true when the technology is released, they should be game changers.

As mentioned, speed isn’t the only advantage.  The CLIP process produces a better and more consistent finish on parts, and given how much faster each layer can be printed, CLIP printers are supposed to be able to take smaller higher resolution layer steps.  Here is an electron microscope view comparing a CLIP part with a conventional 3D Printed part: 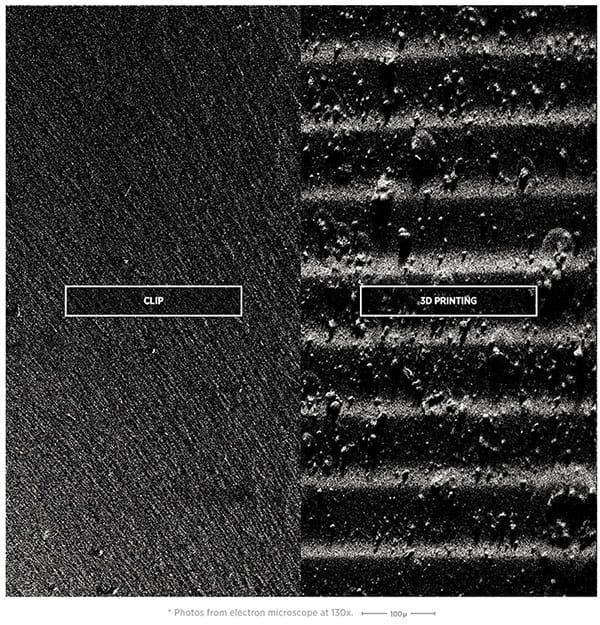 At this stage, we don’t know a lot more about Carbon3D or CLIP.  What we do know is they’ve raised $40M in venture capital from top notch firms like Sequoia.  These are the kind of people that do their homework.

Carbon3D’s machines are not likely to be suitable for the hobbyist.  They look more like they’re gunning for the higher-end professional market.  I’ll leave you with a video of one of their prototype machines doing an Eiffel Tower model in under 7 minutes:

Between this technology and HP’s technology, we should see quite a lot of performance improvement in the professional end of the market and quite a lot of pressure on the incumbent players to innovate further.  Competition in a hot market almost always leads to very rapid innovation.