Why are cutting speeds so important in CNC, and why are they hard to calculate?

First, why are cutting speeds so important for CNC, and second, how come they’re so much harder to calculate for CNC than they were for manual machines?

Once upon a time, we had little or no automation. At best, there were hydraulic tracer machines and screw machines. That’s not to say they couldn’t do quite a lot, but they certainly were not as ubiquitous as CNC has become in today’s machine shops. Instead, we had machines like the iconic Bridgeport Milling Machine. Let’s start by taking a look at the good old Bridgeport, copies of which are still being manufactured today.

The heart of any machine tool is its spindle, and for the Bridgeport, the pinnacle of spindle evolution was the 2JS head. That head used a back gear and a variable sheave belt system to achieve reasonably flat distribution of its 2 HP all the way from 50 to 3750 rpm. Its taper was the common-as-cats R8. Not too shabby:

For automation, we had the Mk I revision 1932 through 2011 or later human machinist. Feedrates were a function of how fast that machinist could turn the handwheel, or in some cases, how fast a power feed could move, which wasn’t an awful lot faster. Given that the handwheel moves through 100 0.001″ divisions each turn and you could maybe turn 2 or 3 turns a second during roughing, and maybe half that for finishing or less, we’re talking feedrates of 6 to maybe 18 inches per minute.

In terms of axes, the machinist could move them one at a time–no coordinated motion was really possible without a rotary table, and even then, coordinated motion was limited to circles. The slick interpolated moves of a modern CNC were hardly even a gleam in the imagination. This was just how these machines worked and nobody worried about it too much.

And then along came CNC. For reference, let’s consider the smallest Haas CNC mill. I’m not sure this is the most common CNC the way the Bridgeport was the most common manual mill, but it is a fairly common CNC that perhaps most importantly is similar in size and capacity. Here is one that was featured in our Home Shop Hall of Fame: 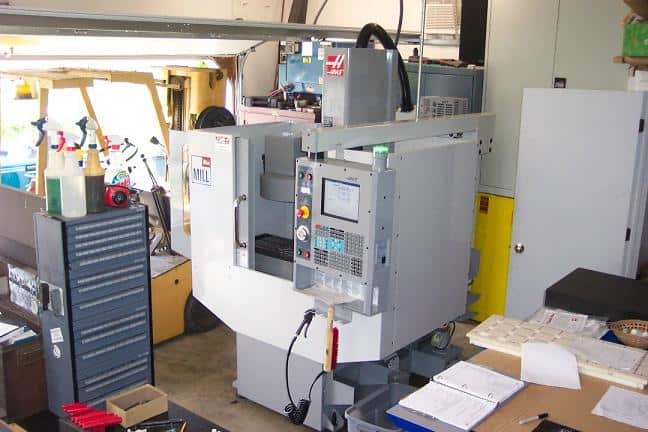 Starting with the spindle again, we have a 7.5 HP, 6000 rpm spindle with a CAT40 taper. The quoted cutting feedrate is 500 inches per minute, and of course this machine is perfectly happy moving not just all 3 axes simultaneously, but also slapping on a 4th axis that will move too!

Getting the Most Out of Each Machine Requires a Different Strategy?

Given that you’ve only got 2 HP, 3750 rpm, and maybe 18 inches per minute of feedrate, plus the fact that many would say the limits of the R8 taper are an endmill of about 3/4″ maximum diameter, what’s the best strategy for removing material with your Bridgeport?

Modern CNC’s often use fancy toolpath strategies such as constant tool engagement angle paths and they take advantage of geometric effects like radial chip thinning to move extremely quickly while exerting as little force as possible on the machine and working to maintain the life of the tool. There’s no point in any of that with the Bridgeport. You can’t turn the handwheel fast enough to feed a radial chip thinned path, and you can’t turn two handwheels at once to go around a corner without dwelling, let alone manage the complicated curlicues that a constant tool engagement path makes. 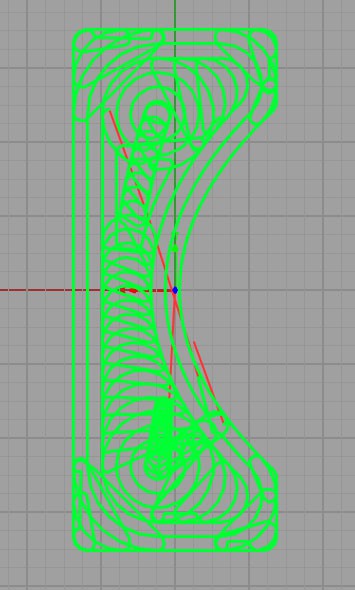 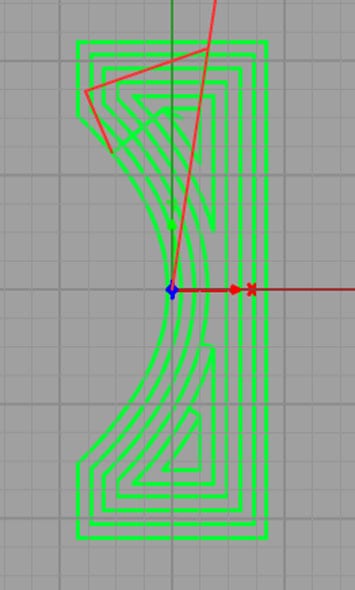 Comparison of the same pocket done with HSM and conventional toolpaths in GibbsCAM as shown by the GWE CNC Simulator. Neither one could really be done on a manual machine…

So, instead of having all this fancy digital sophistication, the answer for manual machinists was to load the biggest cutter they could and bury it. Here’s how the cutting speeds and conditions differ:

– With much slower spindles and on materials that like fast spindle speeds like aluminum, we rely more on chipload than spindle speed to do the work. It turns out that because it is less brittle, HSS tooling can take higher chiploads than carbide. Carbide can tolerate much higher spindle speeds that more than offset that difference, but on a slow spindle, HSS can win.

– Since we have such slow feedrates, it isn’t like we can’t take great heaping gobs if we’re taking skinny little cuts. The answer is to use a larger cutter and bury it. Got a 3/4″ endmill? Use as close to 3/4″ width of cut as you can.

– Since we’ve buried the width of cut, and we don’t have a lot of cut calculation sophistication anyway, we probably aren’t cutting too deep. Depths of cut are 1 x Diameter or maybe a little more, but nothing too crazy.

I’ll add one last consideration–with manual machining, not only are things not happening nearly as quickly as they do with CNC, but the machinist is getting instant feedback from the handwheel about how “happy” the cut is.

Those factors, in a nutshell, radically simplify cutting speeds for manual machining. With no fancy toolpaths, an inability to feed very quickly, and a need to make shallow but wide cuts, we eliminate a whole host of complications. For this kind of machining, the basic equations we’re all so familiar with work just fine. In fact, you can basically tune it up by ear pretty easily once you know what a good cut sounds like.

Now We Can See Why Cutting Speeds are Much Harder for CNC!

Getting back to the case for CNC, there are a whole host of new factors to consider such as:

– Radial chip thinning. Any time you cut less than half the diameter of the cutter wide, the chipload isn’t what you calculate with the simple equations. The thinner the slice you’re taking, the further off you will be.

– If the chipload goes too low, your tool will begin to “rub”, and tool life falls off quickly. The likelihood of rubbing while manually machining is much less. At 3000 rpm and a 3 IPM feedrate, you’ve still got room to go 3-5x slower before you’re into true rubbing territory. HSS tooling is sharper than carbide, making it even harder to get the tool to rub.

– You’re keeping the cut relatively shallow due to the broad widths of cut, and you’re not going around corners as fast as a CNC would. This greatly improves chip clearing and keeps the big jumps in load on the tool that corners cause from happening so suddenly.

The list goes on, but you get the idea. For CNC, the G-Wizard Cutting Speed Calculations consider nearly 50 variables versus the handful that the simple equations are focused on. In addition to facing more complexity from a physics standpoint, the CNC machinist is cut off from the feel of the machine. When something goes wrong, your first warning is often dire (tool breakage is the least of your worries) and then it’s a mad dash for that bright red emergency stop button.

If you’d like to learn more about the art of calculating CNC cutting speeds, check out our free Feeds and Speeds Cookbook or get signed up to try the G-Wizard Calculator: