Hybrid Machining: Combining Additive and Subtractive in One Machine 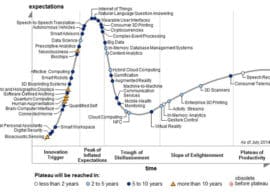 If there’s one thing we can probably all agree on, it’s that there’s been a lot of hype surrounding 3D printing.  It seems like every day brings yet another new consumer 3D printer on Kickstarter of someplace else and it’s not clear what the new kid on the block can do that the old ones won’t.  The consumer side of 3D printing is still very frothy.  However, the industrial side has started to settle.  Business, after all, is less concerned with doing what the Cool Kids are doing (well everyone but marketing is less concerned anyway) and more concerned with what pays the bills and creates profit.  Companies like GE are successfully launching large scale manufacturing of components that are best made via 3D printing or Additive Manufacturing as the Business/Industrial world prefers to call it.

In fact, Gartner has elected to put Business use of Additive Manufacturing in a favorable spot on its famous “Hype Cycle:” 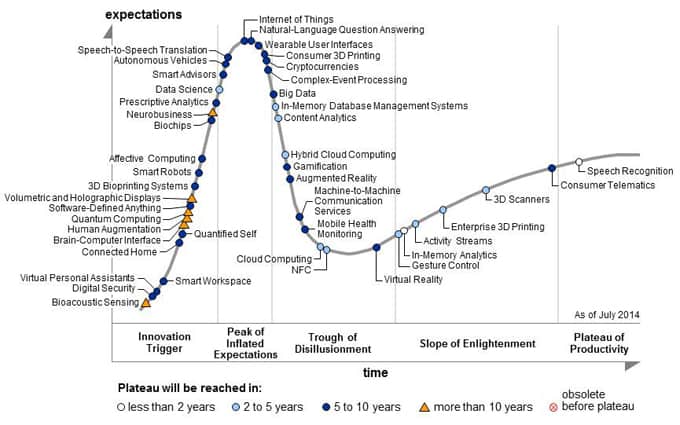 Let’s briefly digress to talk about what the Gartner Hype Cycle is.  Gartner is one of the more prestigious groups of industry analysts.  They make their living selling research reports which help companies to understand the underlying trends in their industries.  As marketers got more and more adept at creating each new wave of hype for their products, companies needed a way to sift through which things were over-hyped and potential not worth the risk and which things were actually worth the hype.  They show different areas of hype passing through the following distinct phases in their evolution:

1.  Innovation Trigger:  People are starting to talk about an innovation.  All that talk creates the hype cycle.

2.  Peak of Inflated Expectations:  So many people are talking about the innovation in such glowing terms that almost no matter how good it is, the innovation can’t possibly be as good as the hype.  Be careful at this juncture!

3.  Trough of Disillusionment:  Sure enough, people get stung by over-hype and they are disappointed.  Interest starts to wane, more and more failures are talked about, and there is often a shake out among purveyors of the technology.  This is a tough time to be basing your business on the innovation.

4.  Slope of Enlightenment:  Freed from the rose colored glasses of over-hype, we start to see that in fact the innovation has merit.  It’s had some time to mature.  There are more stories available about success and people speak of the innovation in more measured terms.  These are good solid times for the innovations as many companies are funding pilot programs and getting their feet wet while expectations are not so high they cannot be met.

5.  Plateau of Productivity:  The innovation is mature and Mainstream adoption has taken off.  It’s much easier to understand what the innovation is good for and who the players are.

In the 2014 Hype Cycle, we can see that Consumer 3D Printing has entered that ugly decline from the Peak of Inflated Expectations that leads very shortly into the Trough of Disillusionment.  Expect a shakeout soon and an end to endless announcements of more “me-too” 3D printers for consumers.  It’s put up or shut up time for that market.

However, the industrial (or as Gartner calls it, the “Enterprise”) 3D Printing market is in a much happier place.  It is pretty far along the slope of enlightenment.  We’re not to Mainstream Adoption quite yet, but we are at a point where it is becoming clearer what 3D printing is good for and how to succeed with it.

As this happens, it unleashes a watershed of lesser innovations that are refinements to the original idea.  Case in point:  Hybrid Machines that combine Additive and Subtractive Manufacturing in one enclosure.  Let’s take a closer look.

It’s a very neat video, but how would you use such a thing?

The total time to deposit the material, the additive portion for the part, was supposed to be 230 minutes, according to the video.  Not a short time period to be sure.  On the other hand, consider how much time it would take to hand weld a part like that?  What would the quality of the welded part be versus a completed automated process like this machine can do?  Could a cast part suffice and if so, what does the time for that look like versus an automated solution?  What about the savings in setup for process like this?

There’s no cutting rough stock or loading it onto the machines table.  The Laser Deposition process blows metal powder into the path of the laser which immediately welds it down into place.

It makes me think again of one of the fundamental aspects of additive manufacturing:  it’s ideal for low volumes that need quick turnaround and benefit from savings in setup, tooling up, and similar prep times even though the actual per part times can be much higher than with a purely subtractive process.

Imagine a case where you need to do extremely low volumes of extremely sophisticated parts–for example replacement parts for turbines in a maintenance facility.  A machine like this might just be ideal.  In fact, repair work is one of the areas DMG Mori suggest for the machine since it has the ability to build material that has worn or broken away back up with its additive capability.

It’s still fairly early days for the hybrid concept.  DMG Mori Seiki is hoping to ship the machine pictured next year, Matsuura has a machine, and there are others in the works.  I would expect to seem some announcements and demonstrations at IMTS this year as well.  Delcam, for example, will be delivering a talk on, “Combining Additive and Subtractive Manufacturing in Manufacture and Repair.”  That reminds us that we will not only want to machines but also the software to enable us to take full advantage of Hybrid Manufacturing.