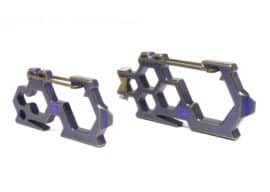 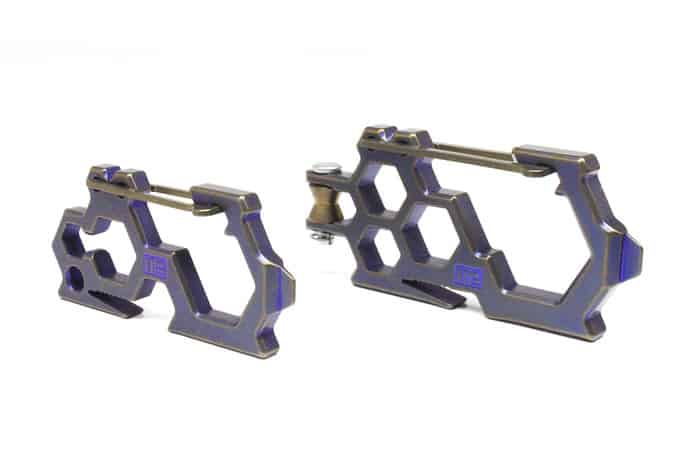 Once upon a time, Caribiners were exotic mountain climbing equipment.  Eventually, someone started using them to clip keychains to their belts and the like, and they became a fashion statement.  Once things are fashion statements and cool, there’s no telling where they go from there.  In this case, we may have the ultimate evolution.  The Ti2 Para-Biner is a Kickstarter caribiner that is CNC machined from Titanium, finished to the degree it looks like exotic alien astronaut gear, and given a variety of additional functions for the everyday carry crowd.  This thing is a caribiner par excellence, but the set of three can also be used together to do the following:

–  Instant block and tackle with paracord to deliver 200-400% mechanical advantage.  No knots are needed because of its exclusive “Para Cleat” system.  Try that with your ordinary keychain caribiner!

–  Bottle Opener:  C’mon, who would want to get all the way up the mountain only to discover the six pack they had schlepped all the way up those rocks could not be opened because nobody brought an opener?

The Ti2 guys are wild and crazy people.  So they tested the load ratings for each of the three sizes.  The little one fails at 1,350 lbs and the biggest one failed at 3,905 lbs.  Whoa!

That’s all cool, but I saved the best part for last.  My pal at this machine shop has been known to say that if it can be driven by g-code, he can make it do darned near anything.  In this case, they wanted a nice thick coat of sulfurized cutting oil on these caribiners before face milling them.  Gives them a nicer finish than just misting, and they can’t go flood as the mills have no enclosures (all the better for working with the really large parts they sometimes get into the shop).  So here is what they came up with by way of robotic lubricant application:

I’m thinking everyone needs one of these in their toolchanger.