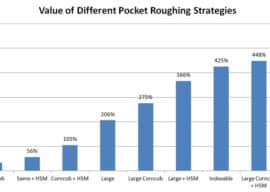 Advancements in Astronomy have largely followed steady increases in telescope power, culminating in telescopes in space like the Hubble.  Similarly, advancements in physics have tended to follow the race to build bigger and bigger particle accelerators.

It helps to have more powerful instruments, regardless of what science you are probing.  And the same applies to feeds and speeds when machining.  As G-Wizard Calculator has become steadily more powerful at manipulating the effects of more and more variables, it has become possible to see behaviors involving complex interactions that were not entirely visible before.  What’s the impact and tradeoffs of cut depths, tool diameter, tool deflection, and spindle power curves, for example?

Our latest step in this vein is the upcoming CadCam Wizard.  I referred to it recently as a “Major Feeds and Speeds Innovation“, and that’s no joke–I’m already seeing some interesting results while testing the initial version before release.  What Cad Cam Wizard is, to simplify matters, is a way to generate optimal feeds and speeds from as little information as possible.  This makes it radically simpler for beginners, and the optimization aspect makes it radically more powerful for experts because the Cad Cam Wizard chooses optimal valuables for more variables so the expert doesn’t have to guess.  I won’t dwell on it too much more here, as I want to write about it with screen shots and a video so you can see more for yourself, even download the Beta version to try it out.

Meanwhile, it is starting to generate new learnings.  One of the inputs it has is something I call the “Roughing Strategy.”  Assume we want to cut a pocket.  The roughing strategies for pockets are as follows:

Pretty comprehensive, though I will likely add more over time (plunge roughing, anyone?).  I used the Cad Cam Wizard to generate cut widths and depths that resulted in optimal Material Removal Rates (MRR’s), and then I graphed the information to see what effect the different roughing strategies were having.  Here is the graph of the average advantage of each strategy over all materials: 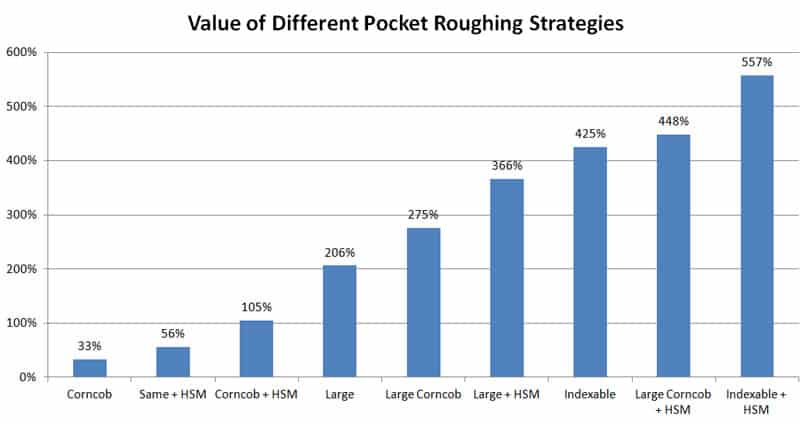 The best strategy was 5.57x faster than just using the same endmill for finishing and roughing, so there’s definitely gold in them thar hills.  It takes some combination of tooling and CAM features to unleash the potential here, so let’s talk about that first.

The two additional tools we make use of are a corncob rougher and an indexable endmill.  Corncob roughers have serrations on their teeth that chop up the chips into smaller bits to facilitate chip clearing and increase chip loads: Corncobs are a very cost effective way to up your Material Removal Rates a bit, but they are by no means the last work.  They’re only suitable for coarse roughing as the serrations leave lots of lines in the wall being machined.  The tests that resulted in the graph above assumed either a 1/4″ corncob (same size as finish EM) or a 3/4″ corncob.

A big step up from corncob roughers would be an indexable endmill: 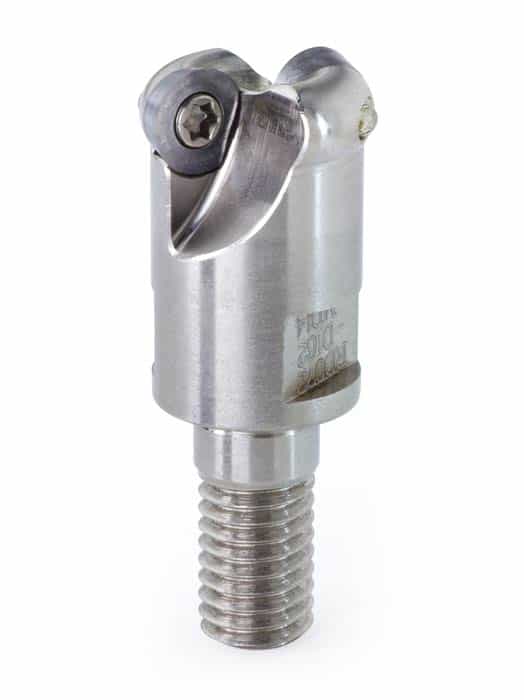 These guys are capable of quite a large chip load as you can imagine, and their inserts are often a lot more rugged that the delicate edge of a solid endmill.   For the tests we assumed a 1″ indexable endmill.  They’re available in lots of sizes and there are probably even cases where getting down in a big pocket with a face mill makes sense.

HSM toolpaths allow us to overcome the limitations of plowing into corners where the loads on the tool can double almost instantly.  They do this by using special loopy toolpaths that never go into corners except by peeling their way in a little at a time: As you can see, the two toolpath styles are quite different.  Avoiding corners accounts for HSM’s ability to drive the tool through the material so much faster and harder.

The other CAM roughing feature we considered is Rest Machining.  This is the ability to cut a pocket with a larger roughing tool that can’t clean out all the corners, and then to go back with a smaller tool that can get into all the crevices and do so without recutting the areas that the larger endmill already dealt with.  The small cutter is there to machine “the rest”, hence “Rest Machining.”

Here is a typical example of Rest Machining from OneCNC: 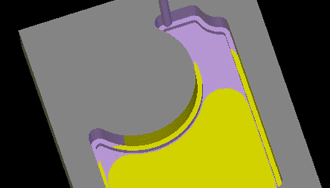 The yellow areas were roughed out with a larger cutter but it can’t get into the purple areas, which have to be machined by a smaller cutter.

Both Rest Machining and HSM toolpaths are premium CAM features.  Not every package has both of them or even one of them.  Sometimes it is an extra-cost upgrade.  As you can see from the graph above, they can make a significant difference.  But which one is better?

Looking at the chart, swapping to an Indexable End Mill for our rougher sped things up by 425% whereas just being able to run the same size endmill only got us to 105% faster–about twice as fast versus four times faster.  If you had to choose one CAM feature or the other, Rest Milling looks like a win over HSM, though it has been around longer and is not as sexy.  Of course if you run both, you’ll get all the way to our top category of indexable plus HSM, which was over five times faster than just using the same endmill to rough and finish.

All of these tests were conducted against the G-Wizard Generic VMC machine profile and with the default small 2 ” by 3″ pocket with a 1/4″ depth and 1/8″ radius corners in the pocket.  Changing these variables significantly may change the overall tradeoffs here–that’s why you need a live calculator to tell for sure what’s best for your particular machine, tooling, and situation.

The Role of Material in Choosing a Roughing Strategy

As mentioned, the above chart is an average of multiple materials.  Here’s what the data look like if we break out each material: 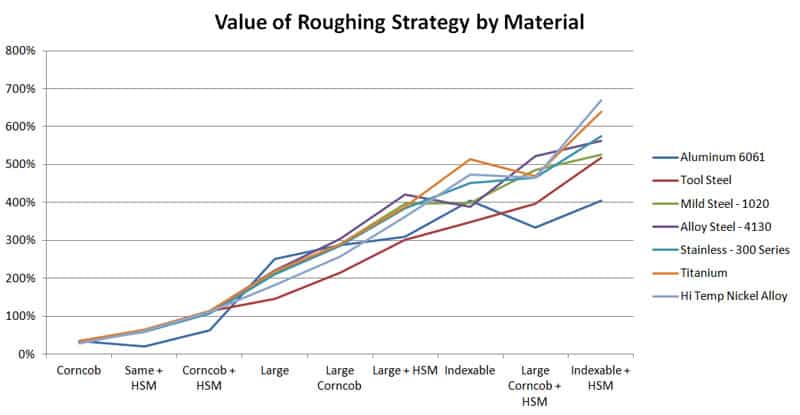 This is an interesting chart because it shows there is some variation in best roughing strategy based on the material being machined.  If nothing else, things are much more pronounced in the “difficult” materials.  Put another way, aluminum flattens out with more sophisticated strategies whereas tough materials like Titanium and Hi Temperature Nickel Alloys (think Monel, Inconel, and the like) need all the help they can get from HSM and Indexable tooling to get the best possible performance.

Value of a Faster Spindle With Aluminum

Part of the deal with aluminum is the 7500 rpm spindle on our Generic VMC machine profile.  The scenarios we’re investigating are topping out on spindle speed before the full benefit of some of the roughing strategies can be achieved.  If we switch to a 10,000 rpm spindle and compare results, we get the following: 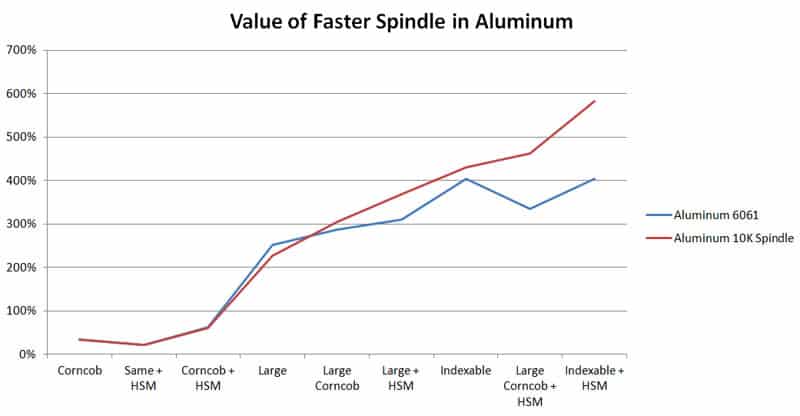 The red line shows how even a modestly faster (10K rpm versus 7500) makes a pretty big difference in our ability ot leverage HSM and more aggressive tooling when roughing.

With more powerful tools, we can optimize more variables and master more scenarios.  We can learn many valuable lessons from the results.  We’ll be launching the Beta Test version of G-Wizard Calculator’s new Cad Cam Wizard soon which will make it easier for you to try your own scenarios and investigations.  If you want stay up to speed on what we’re doing with Cad Cam Wizard, sign up for a free 30-day trial or subscribe to our email newsletter.  More news coming soon!