Another Shoe in the CADCAM Consolidation Game Drops: Cimatron + GibbsCAM 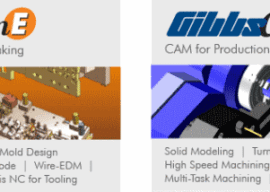 The CADCAM Consolidation Game continues as 3DSystems announced it has entered into a definitive agreement to acquire Cimatron Systems for $97M.  Cimatron includes both the Cimatron CAD system and GibbsCAM.  The transaction is expected to close in the first quarter of 2015.  Both company’s boards have approved the transaction, but regulatory and shareholder approval are still required to complete the deal.  The companies are saying the the transaction was done to bring both product capabilities as well as channel and marketing capabilities to 3DSystems.

Why Do Companies Get Acquired?

In this case, it sounds like Cimatron’s position in the Mold and Die world from both the product and the sales and marketing end were thought to be strategic to 3DSystems.

The are a variety of reasons companies are acquired that usually boil down to the expectation that the acquisition will result in increased growth for the acquiring company.  the acquirer could build it all from scratch, but by acquiring, they want to leverage:

–  Savings in time to build product by acquiring products that are already successful and mature.

–  Savings in time building trust and brand.  This seems to have been a particular interest for 3DSystems who are no doubt looking to use Cimatron’s sales force, channel partners, and products to get in the door of many mold and die shops where they don’t yet have traction.

–  Save time building a team and expertise.  The task of hiring or expanding a team to support growth is never easy, particularly when they need to have strong industry knowledge as in this case.  Buying a company for this purpose is called an “Acqui-Hire” in the Silicon Valley startup world and is quite common.

On the product side, many are asking, “Why would a 3D Printing company be interested in CAM?”  The answer is simple–most 3D Printing will have to coexist alongside subtractive processes for a long time, perhaps always.  Having a seamless integrated toolset that accomplishes both is a big opportunity.  For example, imagine cases where a mold includes both subtractive components and additive inserts.  Perhaps conformal cooling is in play.  Another case that makes sense comes from the realization that most 3D printed parts need some postprocessing that’s often done with conventional subtractive machining processes.

Sometimes market conditions make acquisitions particularly likely, and here I’m talking about Stock Market conditions.  Take Cimatron, which will be acquired for $97M.  That’s over 47% more than the company had been trading at in the market.  Evidently 3DSystems thinks it is worth more than it’s own shareholders did, as that is quite a healthy premium.  That puts the value of Cimatron at about 18 times earnings and 2 times sales.

Meanwhile, 3DSystems, even though it has traded down in price a bit after HP’s announcements is valued at almost 7 times sales and almost 187 times earnings.  Think of it as being like a currency exchange situation.  They’re buying the revenue and profits of Cimatron using stock that valued much more highly on earnings and sales.  If they can use that relatively cheap purchase to continue at the same growth rate, they might value Cimatron using their same metrics.  So perhaps it’s worth as much as 3 or 4 times what they paid for it.  On the other hand, if they stumble and fail to grow, it could prove to be less, though they’d have to stumble very badly to close the gap in multiples between the two.

Look for more acquisitions as companies identify suitable candidates.  Autodesk has been busy with it as has Stratasys who paid even more for GrabCad–a much simpler technology to reproduce than Cimatron’s.