Too Much Stickout Can Ruin Your Day (And Your Cutter & Job!): Use G-Wizard to Check It 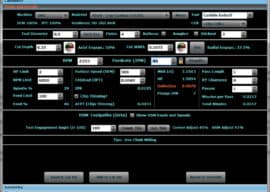 Somewhere early in my machining background I internalized the virtues of minimizing tool stick out. I remember very early purchasing a set of screw machine length twist drills just because they were shorter and less likely to flex than the jobber length many are used to from the hardware store. I could see and feel the difference quite easily. I also don’t buy many long cutters–they cost more money and you’re tempted to hang those lovely flutes out there too far.

But, not everyone has had the evils of excess stickout ingrained. Recently I was reading a post over on PM by a machinist who was unhappy at G-Wizard because he’d broken his endmill after running some feeds and speeds he got from it. Not a happy story. I hate breaking a cutter, although for me, it mostly happens when I fat finger an MDI move and rapid into something, LOL! BTW, I’ve trained myself just not to use G00 in MDI. Life’s too short, but I can be patient while the machine moves at a feedrate that is slow enough I can press the big red sphicter button if I screw up the MDI.

Getting back to our story, this fellow wanted to use a 1/2″ 4 flute Carbide EM to cut a 3/16″ wide (actually that was the widest, it was a diagonal cut along an edge) by 1/4″ deep cut. He got back feeds and speeds of 2353 rpm and 46 IPM. Not sure how he got to the latter, as I get 29 IPM from the G-Wizard when I enter the parameters as I mention on the post. But, as it turns out, I don’t think the 46 vs 29 IPM feedrate disparity is the issue. He posted a picture and sure enough the experienced hands of Practical Machinist immediately focused on his tool stickout. His 1/2″ EM looks like it is hanging down 3″ or so.

Turns out we can use G-Wizard to check this. If we take that cut and change the default 1″ stickout in G-Wizard to read 3″, as well as overriding the recommended feedrate to 46 IPM, there is an immediate warning–tool deflection is 0.0078″ and that’s lit up in bright orange: Too much deflection is called out in angry orange: 0.0078″

We recommend a maximum of 0.001″ when roughing, a figure several tooling manufacturer’s have confirmed, and this cut is producing nearly 8x that. Sure enough, the cutter broke.

It’s worth taking the time to enter your cutter stickout even if you don’t plan to use the Cut Optimizer. FWIW, Cut Optimizer would’ve dialed back the depth of cut on this to about 0.035″ if the 3″ stickout and the other parameters were a requirement–for example, to reach down in a deep pocket.

Stickout is an interesting thing. A 1/2″ carbide EM seems pretty darned rigid right up until you hang it out far enough and pump some horsepower into it (that’s a 1.5 HP cut too). It’s interesting because of the deflection effects, but also because it affects chatter. Of course it makes sense for something that governs deflection so much to matter for chatter too. It’s worth making a New Year’s resolution to standardize your shop’s stickouts and not just let them turn out randomly. Make sure you have some really choked up on the cutter and some where it hangs out there so you have some reach. The reason to standardize is twofold.

First, you can type it into G-Wizard that much quicker if you can look at the toolholder with cutter and know because your shop only allows a few sizes.

Second, stickout is one of the parameters that must be held constant for chatter to be repeatable. The others are machine, tool holder, and tool. That’s surprisingly few variables to have to control, and the tool doesn’t have to be the exact same tool, just the same in the sense you’d reorder another one like it. By keeping those variables constant, and entering your cuts into G-Wizard’s Cut KB, you can eventually map out where the chatter zones on your machine are. You’ll wind up with an empirically-derived stability lobe diagram and a chance to radically increase your speeds and feeds.