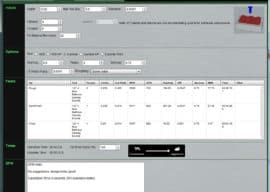 While most machining is 2 1/2 D, 3D Surfacing is still very popular.  What’s the difference?

With 2 1/2D, it is rare that X and Y change at the same time as Z on the surface of an object.  It can happen during cutting, usually due to ramping or helixing down into a cut.  But otherwise, we largely move in either the XY plane or Z, and not at the same time.  With 3D, all three axes are frequently in motion at the same time.

Another difference is we typically are using flat nosed or bull nosed (a flat end mill with a radius much less than the cutter radius) end mills for 2 1/2D.  For 3D, we typically use ball nosed end mills because they can cut a surface at any angle.

When it comes to feeds and speeds, there are also many complications in 3D versus 2 1/2 D.  The toolpaths can be more complex, and we have to think a lot more in terms of multiple passes and multiple toolpath types to get a smooth 3D surface.

This video of a Datron M8Cube machining a mold for a quadcopter is a pretty typical 3D machining job:

In it, you can clearly see the different nature of the roughing versus the finishing pass.  The roughing pass is basically doing 2 1/2D machining, hence the “layer cake” appearance.  This is not an uncommon approach, although there are many other approaches possible.  The finish pass relies on a ballnosed cutter and small stepover (distance between successive passes or contour lines on the part) to create a smooth flowing 3D surface.

There’s a lot more to it than this simple explanation, but let’s keep it short and you can click the link if you want more:

Think of CADCAM Wizard as being an extra employee, who is a pretty good machinist, who you delegate the operation of Feeds/Speeds to.  You tell the CADCAM Wizard some basic high level stuff.  In effect you say, “Hey Joe, I need a machining recipe for a pocket.  The pocket is 2″ by 3″ in 4130 Steel.  Figure out the best parameters for Cut Depth and Cut Width for a roughing pass, and also give me parameters for a finish pass that’s 0.015″.  I need Feeds and Speeds for all that.”  It is important to note that Feeds/Speeds and CADCAM Wizards use exactly the same code to calculate the feeds and speeds, so given all the same inputs, they will return the same answer.

I hope that the idea of having an associate get a very high level direction so they can do the work of producing a detailed cutting recipe makes sense, because that’s exactly what CADCAM Wizards do.  Here is the new 3D Surface Wizard: 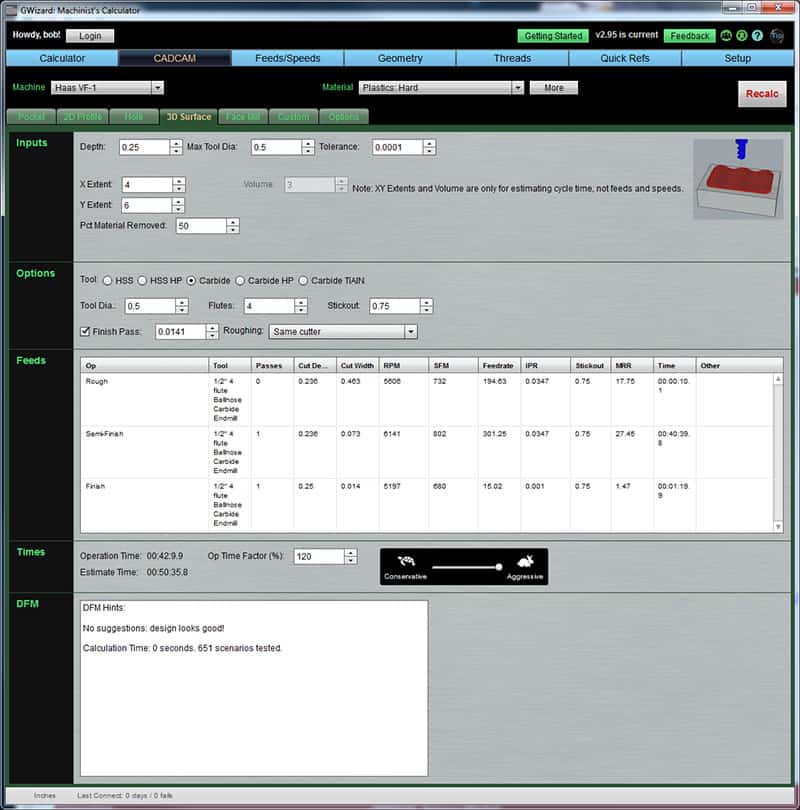 Some things to note:

As you can see, the Wizard does a tremendous amount of work for you if you give it just a little information.  When was the last time you tried over 600 scenarios to find the best combination of Cut Width and Cut Depth for you job?  A lot goes on under the covers in the form of Machine Learning Algorithms to make the Wizard’s choice of which 600 scenarios to test very effective.  In fact, it is exponentially better than randomly choosing the scenarios.

If you haven’t tried G-Wizard Calculator’s CADCAM Wizards feature, you should check them out.  We have a free 30-day trial that makes it easy: