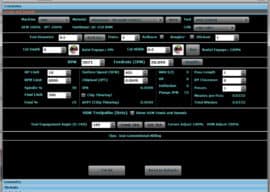 The G-Wizard Machinist’s Calculator has a new HSM Feeds and Speeds feature:

HSM Toolpaths can estimate your Tool Engagement Angle, tell you how much to slow down in corners, and tell you how much faster your feeds and speeds can be if your CAM program generates HSM toolpaths with constant tool engagement angles…

The HSM section provides several tools for dealing with the effects of Tool Engagement Angles (also called Cutter Engagement Angles). The TEA provides a means of measuring how hard a cut is working the cutter. Think of it as the angle of the cutter that is actually engaged in cutting. For example, when slotting, a full 180 degrees is engaged. This is the maximum, except during plunging, when a full 360 degrees may engage. TEA changes as a function of corners the cutter may be forced to negotiate in a complex toolpath for CNC. If you don’t use CNC, the TEA functions are probably not important to your work.

This portion of the G-Wizard Calculator enables you to do the following:

– Calculate the straightline TEA based on tool diameter and cut width. To do so, just press the “Const. TEA” button and you’ll see it come up. For example, a 1/2″ endmill cutting 0.015″ width of cut has a TEA of 19 degrees–much less than the 180 degrees when full slotting!

– Estimate the TEA of a toolpath based on tool diameter, cut width, and the sharpest angled corner in the path. To bring up the TEA Estimator, press the “Est. TEA” button. Here is our 1/2″ endmill, 0.015″ cut width example with a 90 degree corner:

When estimating TEA’s, you’re stuck using the worst case corner since you presumably have a conventional toolpath and not a constant TEA toolpath. You’ll be surprised at how much corners increase your TEA. The example cut went from a paltry 19 degrees all the way to 109 degrees in a 90 degree corner, for example. The estimator will show you a scale drawing of the cutter and the corner to help visualize what’s happening.

– Estimate how much you’d need to slow down in a 90 degree corner versus “straight line” performance. Any machinist has seen cases where corners cause problems with chatter or perhaps even breaking or chipping a corner. The “Corner Adjust” number tells you how much slower you’d have to go through a 90 degree corner versus straightline with a given tool diameter and cut width. To determine the slowdown, press “Const. TEA” first so you have a straightline TEA, and then look at the “Corner Adjust”. For our example, we’d have to slow a path optimized for straight line to just 17% of the MRR of the straight line path.

– Calculate how much faster a constant engagement angle toolpath (HSM) can run than a “standard” toolpath. Calculate the standard feeds and speeds as you always would, press “Const. TEA”, and read off the “HSM Adjust”. Like “Corner Adjust”, this is an increase in MRR. Press the “Show HSM Feeds and Speeds” checkbox to update RPM and IPM accordingly. Our light TEA angle example (1/2″ EM, 0.015″ cut width) goes from a speed of 3805 rpm and 76.5 IPM to a blistering 6946 rpm and 382 IPM with an HSM toolpath because the MRR went up 500% Now you know why they can charge more for that feature in a CAM program!