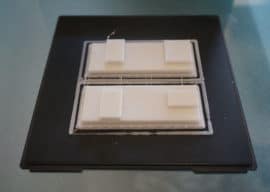 I didn’t have a lot of time to spend with our new M3D Printer, but I did manage to make my first couple of parts with it: 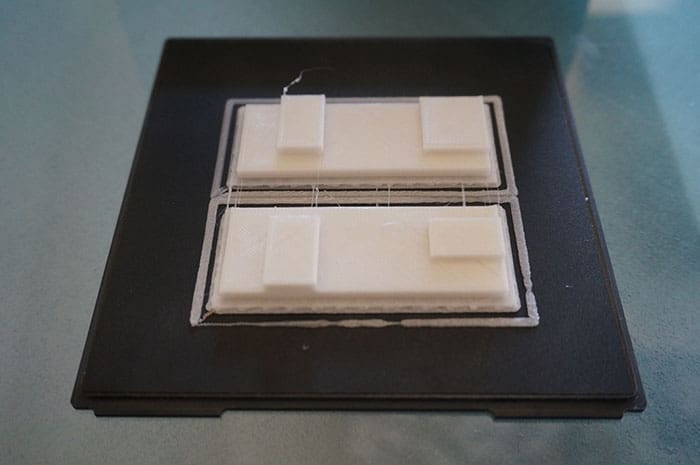 There’s a little bit of fuzz, but that’s pretty typical for 3D printers, especially at the low end…

Close-up of the soft jaw…

The parts are soft jaws for an AR-15 lower receiver project I’m working on–more on that soon!

These parts came out in pretty typical condition.  Yes, there is some fuzz and whiskers on them.  Yes, the textures are not perfectly smooth.  I’ve come to expect this sort of thing when 3D printing.  If you need your 3D printed parts to have a smooth glossy surface finish, you’d better plan on some post processing, at least if you’re running a hobby-grade FDM (Fused Deposition, the filament extruder type) 3D printer.  That post processing can range from bead blasting to applying a little elbow grease and sandpaper to dissolving away the imperfections with acetone vapors.  There are things that can be done with the printer to improve the situation as well, mostly involving calibration.  One of the things that attracted me to the M3D aside from its very low-cost was it has built-in bed leveling and auto-calibration, and I think those features worked well.

One more thing about these prints–I used the out-of-the-box settings which are not the finest finish settings.  Rather, they’re more optimized for faster printing speed.  So, this printer at least claims to be able to do better.  As I said, I am very satisfied with the results. They’re typical of what I’m used to from other 3D printers.

Let me back up and walk through the first part experience a little bit, to give a sense for newcomers.  Hopefully you’ve seen my unboxing article, but if not, take a quick peek while we wait here.

So, having unboxed the printer, my next step was to load the filament, which M3D calls “3D Ink”.  Cute.

Here I have a confession to make: being the impatient, “I don’t need no steenking user manual,” kind of guy I am, I struggled.  A cursory browse through manual and some videos had me trying to load filament without using the nifty little software app that comes with the printer.  That’s a mistake, because it has a built-in feature to guide you through this process.  Once I calmed down and got with the program, things went smoothly.  Being patient with the M3D is important, because it’s no speed demon.  It’s calibration and other procedures are slow and deliberate.  There were times when I wondered if the software had crashed, but this was more me being impatient than a real problem.   They could use a little more feedback from the software about what’s happening, and a few more run throughs of the documentation with noobs to tell them where to tighten it up, but in general all worked well. 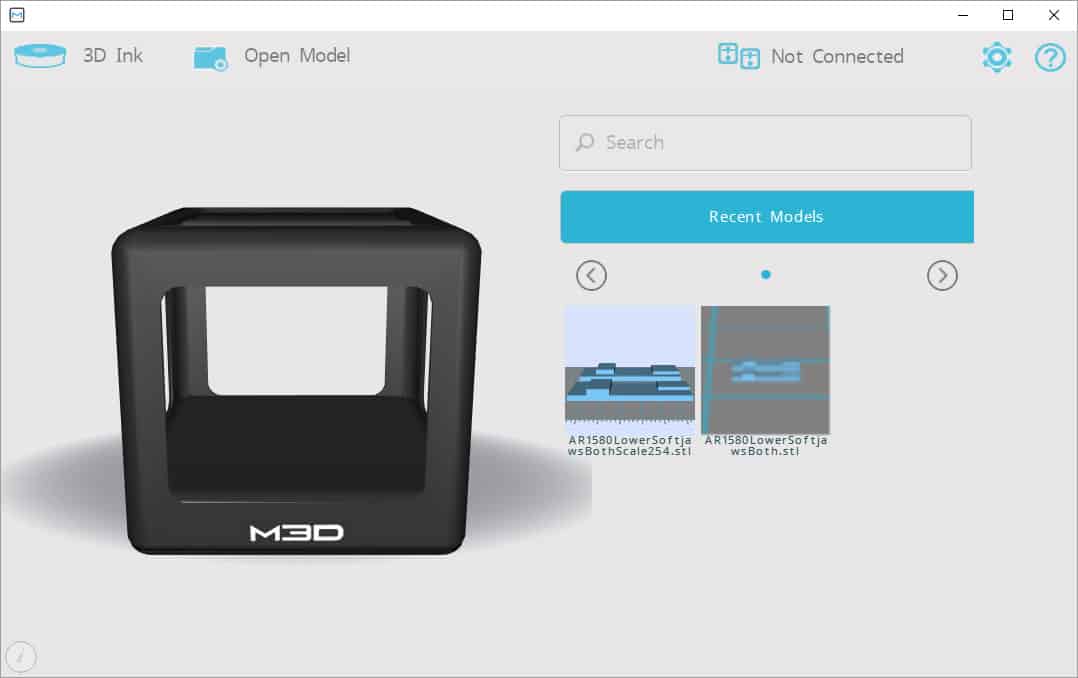 M3D’s software as it comes up…

Once I had filament, it was time to make some parts.  As mentioned, I’d been working on a set of soft jaws in Fusion 360 for my AR-15 project.  I decided printing them so I could trial fit them was an ideal thing to do with the M3D.  I loaded an STL file with the jaws into the M3D and encountered my first problem.  The jaws were microscopic.  I had done most of the CAD work in Fusion 360, but loaded them into Rhino3D for some final manipulation.  I don’t remember the details of exactly why, but I exported the STL from Rhino.  As near as I could determine, I think the M3D wants STL’s to be in metric units and I had saved inches.

This was not a big deal to fix, I reloaded in Rhino, scaled the parts, exported a new STL, and brought that into M3D where I encountered my next issue.  The jaws were just too big for the work envelope of this little machine.  Queue the important news update–the M3D Micro (my little printer), has a bigger sibling coming soon called the “M3D Pro”: 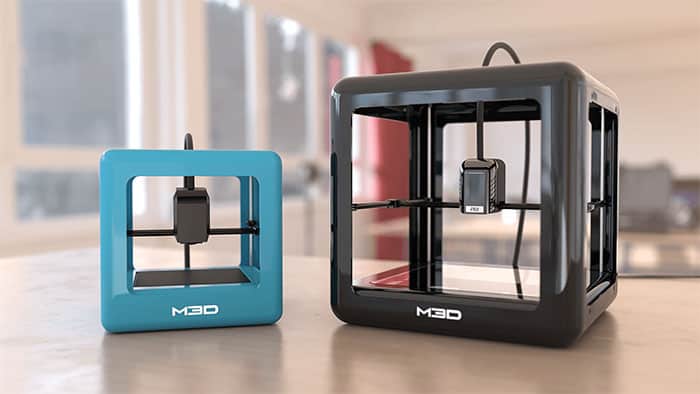 The M3D Pro brings a lot of improvements to the table:

I would love to play with an M3D Pro, but we digress.

So, I got the jaws re-scaled to metric and loaded them in and they were too big.  By this point, I had some facility with the M3D Software and was able to scale and position the jaws right in the software so they fit: 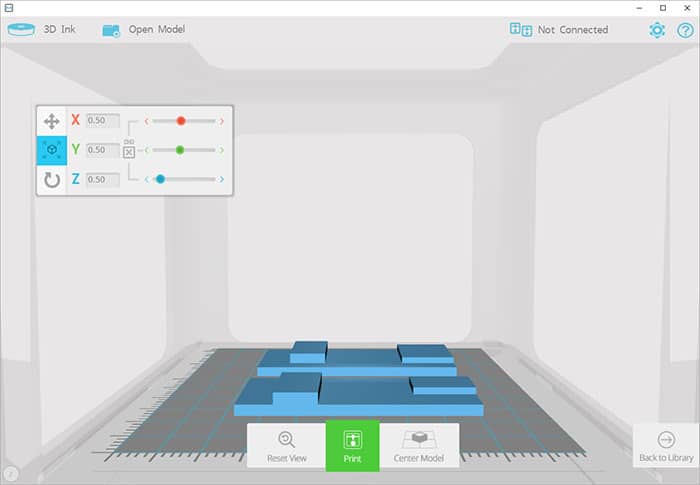 OK, so having been scaled, the 3D printed soft jaws were much less useful for my original intent–seeing how well they’d fit against the lower recievers I had on hand.  But, I was having fun with this little printer and didn’t want a little thing like usefulness of the parts slow me down.  So I hit the button to start the print and away it went.  A word of warning–ALL consumer grade 3D printers are SLOW.  I have no doubt I’ll buzz through these soft jaws on my CNC mill in no time flat by comparison.  And I have to admit, the M3D is even slower than any other 3D printer I’ve used.  But in fairness to M3D, the next nearest 3D printer in terms of cost was 3x its price and that was for a kit.

But, I can’t sit my CNC Mill right next to my desk and listen to it purr while I work.

The little M3D Printer does indeed purr.  It’s quiet and unobtrusive.  It would be great in a home (or pro) office or classroom.  The soft jaws took about 2 1/2 hours to print and ran without a glitch.

I like the M3D.  It’s great fun to play with.  I have taken to dragging it along whenever I am going to meet friends.  The edges of the cube make for a convenient handle, and the look on people’s faces when you plunk it down in front of them is always one of delight.  One of the best experiences was going to get coffee.  I sat down on their outside patio with my coffee, printer sitting in front of me, while I waited for my friend to show up.  I noticed three young fellas at a nearby table eyeballing the M3D, one of them caught my eye, and before I knew it the three had slid out of their chairs and sauntered over.

LOL, they had heard of them and were seriously curious now that they could see one.  As we started to chat all three sat down fascinated.  They had endless questions about what it could do and how hard it was to work it.  One of them mentioned in hushed tones to his friends that he’d heard people were making guns with 3D printers.  I opined that while this was true, they weren’t very good guns and that there were all sorts of much better projects that could be made.  Towards the end, one of them asked how much it cost.  “$349,” says I, and to a man, their eyebrows shot up.

Yes, I agreed.  It certainly is a deal.  I don’t doubt they will have bought one.  I will ask if I run into them again at the coffee shop.

Meanwhile, if you know someone, perhaps a young person, or maybe just a friend that loves to tinker, I can’t imagine a more fun gift you might give them than a $350 M3D printer.  It has a few foibles, mostly that it has a small work envelope and it is slow, but for $349, a tremendous amount of fun could be had.  And when you outgrow it, and want to move up, give it to another friend so they can start their journey making things.  These little printers seem like they’d be great for classrooms and summer camps to introduce young folks to the art of making.

I owned a car once that I loved.  It was a Fiat 124 spider.  I only paid $400 for it.  It ran like a top and was a blast to drive.  It was ugly as sin, but cost so little I never worried about it a bit.  I just tossed it around and had fun with it.  I’m not sure this little printer is as much fun as my Fiat Spider, but then again, not much is!