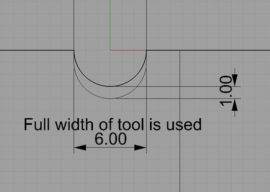 I got a note from a customer who wanted to understand better why GW Calculator works the way it does with Cut Depth on Ballnosed endmills.  Specifically, he had a cut where he wanted to enter the full diameter of the tool, but he was being limited to effective diameter, which was smaller.  When depth of cut is less than the radius of a ballnose, a little thought and perhaps a visual shows that the full diameter is not engaged, but just the diameter out near the end of the ball.  Yet, he had a situation where the ball was down in a slot, and this is what was worrying.  He sent this diagram to illustrate: 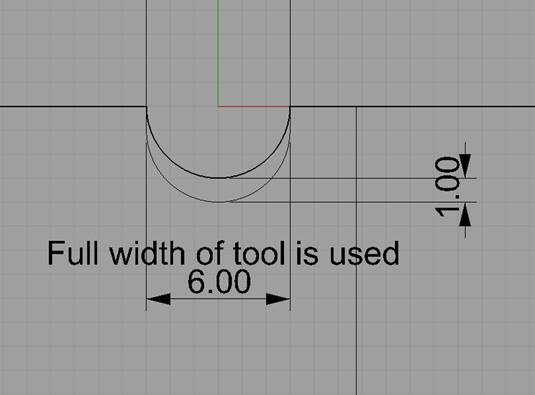 Is Cut Depth always the depth of the successive path is increased?

He wanted to enter “1.0” as the Cut Depth and still be able to get the full diameter as the Cut Width.  Instead, G-Wizard treats this as though the top of the material was the top dimension line for the “1.0” dimension–less than full width.

The way to approach the geometry problem posed is to understand that Cut Depth is defined as the total depth of the tool that is actively making chips.  For this example, it is equal to the radius of the cutter, not the distance the cutter has moved on successive passes.  But let’s put definition issues aside and consider what the Cut Depth does to the calculations.  That’s what matters and it will explain why we want to enter the full length of the cutter actively making chips.

First, Cut Depth is used to establish the effective diameter of the ballnosed endmill.  This, in turn, is used to calculate the rpms from the surface speed.  In this example, we clearly want the effective diameter to be the whole diameter of the ballnose and entering that full depth as in the definition makes that clear.  Otherwise the tool spins too fast.  BTW, it’s probably not going to be a lot too fast and it may not matter a much unless you’ve got a tough material.
Second, Cut Depth is used to penalize surface speed and chip load on deep cuts.  Simply put, the cutting edges get less access to coolant and air for cooling and it is harder for them to drag the chips up and out of the way.  Hence we penalize surface speedand chip load.  Here again, the definition makes sense given that we’re making chips all along the full distance (radius of the ball).  From this perspective, Cut Depth ought to be the vertical distance chips have to move to find “air”.
Note that these considerations will be felt for any tool that has a pronounced taper to it, so it’s best to get in the habit of using the distance from the tip that is actually making real chips.  We can ignore the slight rubbing up the wall that is past the tapered area.  OTOH, if you have a tapered endmill where the taper extends the whole flute, every time you drop the tip, the whole distance from tip to top of workpiece is making chips.
These are odd but interesting case, to be sure.  Thank to Kevin for contacting me about it.